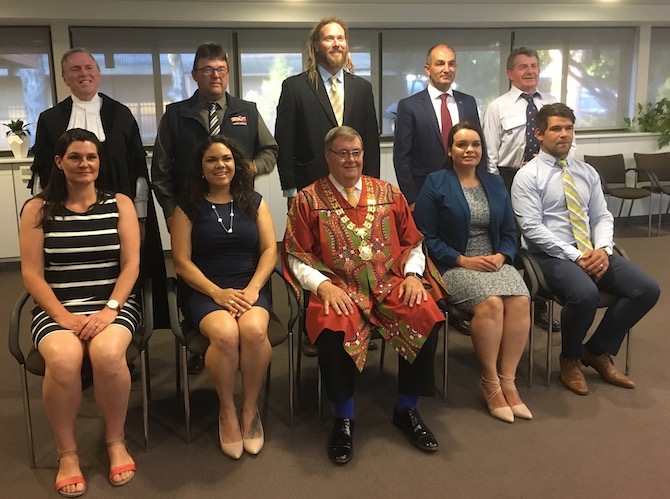 Top-scorer by a huge margin in the councillor vote, Jacinta Price, declined the nomination for Deputy Mayor at last night’s first meeting of the 13th Alice Springs Town Council.

She said before the meeting: “I don’t have the time to commit myself to such a position given my other work commitments.”

But earlier, in response to a question from the Alice Springs News Online, Cr Price quashed rumours that she has political ambitions other than the town council, and may resign before the end of the term.

Asked before the meeting whether he would be voting with a block, new Councillor Glen Auricht said: “I am going to take everything on its own merits. I am not really aiming to be conservative or left or right or anything. I might be conservative, perhaps, I don’t know, but I am progressive perhaps with changes in some areas. It’s all about advancing Alice Springs to be a great place to live and do business.”

New Councillor Matt Paterson, also asked before the meeting about any alliances he may have, said: “I’ll just have a look at each decision and I’ll vote for what I think is the best for the town. I am not on any side. I’ll just work with the other members, and we’ll see how we go on each decision.”

The new council had to decide whether to give the Mayor a casting vote (in addition to his deliberative vote, in “ordinary council meetings,” not committee or other meetings), as the 11th and 12th council had done.

Including the Mayor the council has nine members and if all are present, a tied vote would not occur, but it could if there were absences.

New Councillor Jimmy Cocking asked how many times a casting vote had been required in the past. Opposing a casting vote, he said in the event of a tied vote a matter “could go back to committees” and be decided a month later.

CEO Rex Mooney said “the council is a business, a big business” and on some occasions such a delay was not desirable. In the last council there had been a “handful” of mayoral casting votes.

In the end the motion by Deputy Mayor Jamie de Brenni, seconded by Cr Price, to give the Mayor a casting vote was carried unanimously.

The incumbent Deputy Mayor was re-elected for a year but not without some indication of alliances.

Cr Cocking, perhaps to illustrate dynamics in the opposing camp, nominated Cr Price for the position “given it is a new council and people did vote for a change to the feel of council, and given the popularity of Cr Price”.

She declined the nomination “given my work commitments” and she nominated the incumbent de Brenni. He accepted following Cr Paterson’s seconding of the nomination.

Cr Banks then nominated Cr Cocking because of “his participation in the community and professional attitude”. He accepted the nomination which was seconded by new Councillor Catherine Satour.

Cr Eli Melky said “it’s been a long time since we had a female Deputy Mayor” and he nominated Cr Satour who accepted.

When Mayor Ryan called for a seconder Cr Cocking said he would “pass over” his nomination to Cr Satour, seconding her nomination and withdrawing his because, he said, it’s time to boost the representation in council of women, “particularly an Arrernte woman”.

A secret ballot confirmed Deputy Mayor de Brenni in his position. The voting numbers were not disclosed.

Cr de Brenni was a prominent member of a solid conservative block in the 12th council and had told the News during the election campaign that his ambition was to become Mayor of the 14th council in four years’ time.

His re-election was followed by the election of members to 34 council and external committees, including standing committees reporting each month: Finance (Cr Cocking in the chair), Corporate and Community Services (chair Cr Price), Technical Services (chair Cr Marli Banks).