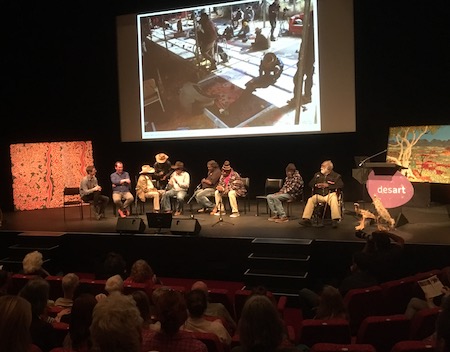 APY chairman Frank Young has two major objectives in his life: Keeping alive the stories of his ancient land, and giving its people a future by moving them out of their welfare dependency.

A vibrant art movement, already a significant money earner, is a good starting point for the second aim, with Mr Young centre stage as the co-winner of this year’s Telstra award.

And as he headed up a presentation yesterday at the prestigious Desert Mob cultural festival in Alice Springs – about producing paintings for the National War Museum in Canberra, which gets well over a million visitors a year – he and six other senior men made sure to tell the crowd of 400 the significance of their Tjukurpa: to wrapt applause they sang a watersnake Dreaming  (two snake brothers devouring two sisters).

Mr Young and the body he chairs,  Anangu Pitjantjatjara Yankunytjatjara Council, a statutory authority of the South Australian government, is embroiled in a conflict with the CEO, Richard King: Mr Young has sacked him but Mr King says he won’t go.

Notwithstanding the fact that APY’s Mr Young presides over 10% of SA’s land mass, the state’s Aboriginal Affairs Minister Kyam Maher (at right) has nothing to say about the conflict.

“The comment provided yesterday still stands and we won’t be providing a running commentary on this,” says his spokesperson when we asked the minister for a comment.

In fact no comment had been provided: All we received from the minister’s office was a single fact, namely that in the 2016/17 fiscal year “$1,963,640 was budgeted by the State Government for the administration of the APY Lands Rights Act”.

In an interview with the Alice Springs News Online after his Desert Mob presentation, Mr Young (left) made it clear that his conflict with Mr King isn’t personal. I asked him: You sent a letter to King because you want him to go?

Mr Young replied: “Yeah, that’s what people want. Not the executive board but the whole of the land. APY land. All of the APY land.

“The land belongs to us. We employ people to work for us and tell us how things are going, and Richard [and another person] are supposed to work for us, work with us, and support us, for our land, not [just] the executive board but everyone.”

And are these employees doing that?

“I don’t think so. That’s the problem. I am working for the people who put me into that work,” says Mr Young.

“People are struggling to get their own businesses, for 40 years now.”

That’s the time the APY Land Rights Act has been in force.

“Where is our business in the lands?”

He says there is the cattle business, agisting stock from stations that are not Indigenous-owned.

Mr Young is doing “camel work” using an adapted cattle yard. “That’s my business. I don’t get support from anyone. I did my work myself, I turned a cattle yard into a camel yard.”

He says assets should be provided for start-ups such as vehicles, cattle yards and motorbikes.

Businesses people should get into ventures: “There is a lot of business, growing food, veggies, selling second-hand and new clothes, whatever.”

He says community stores are not run by local people, they just work there. Outsiders “run it for us. The shops are called Anangu stores but they are not. They are killing us … charging big money. All these things APY is supposed to do, talk to store managers, drop the price down.”

If Mr King is not doing that, what is he doing?

Has he talked to the minister about that?

Mr Young makes it clear what he sees is the role of outsiders working on the lands: “The people like general manager, other people, should work with us, Anangu, people staying and living in our country.

“And they should think about people who live there and die. We are living there to die. We’ll die there. That’s our country. Other people come and go. We don’t want our land to be destroyed. We don’t want to go back to [being a] reserve, with a superintendent.”

In his letter of dismissal to Mr King, Mr Young says a recent amendment to the SA land rights act would make the lands “an Aboriginal reserve of which you seem to think you are the superintendent”.

The power of change should be in the hands of “old people, old people that have been living there for a long time. They have got law. They are law people. They want to keep their law alive.

“But the way we are travelling now we are destroying that law. That’s an important story that I am telling now. We’ve got to keep our culture alive, our law alive. We are law people. We’ve gone through the law. We are not anybody. That’s our main story – for the land. Yes.”

PHOTO: Frank Young (fifth from left) during a presentation at Desert Mob yesterday.