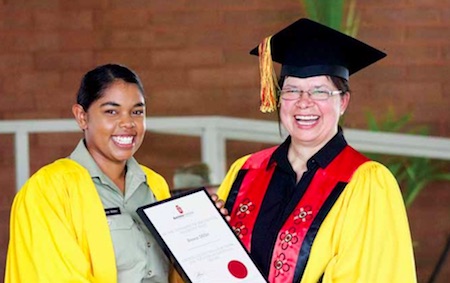 Batchelor interim CEO Kim Jenkinson says the probe into the institute by the Australian Skills Quality Authority is looking into the recognition of prior learning processes for two of the institute’s 65 qualifications.

He says these are the only matters being examinated by the authority. He declined naming the qualifications “because that’s part of the investigation”.

Mr Jenkinson freely answered a question the institute had been stonewalling for some time: How many graduates move into mainstream jobs and hold them for a year to more?

He says he’s not aware of any registered training organisation in Australia that collects post-training histories of students.

The National Centre for Vocational Education and Research carries out satisfaction surveys of students as well as employers: “They do the sampling for pretty much all training institutions across Australia, including employment destinations.

“The data is territory and state based but no registered training organisations are specifically identified. It is survey data at the highest aggregate level.

“We don’t keep that data at this point in time but it’s probably a good area to look into.”

Mr Jenkinson says “for the next few months” until the appointment of a permanent CEO his task is to ensure “that teaching and learning and outcomes for Indigenous students continue” – whether they come from the NT or elsewhere in Australia.