Home Issue 7 The audience is the actor: roll up for The Living Theatre
Issue 7Volume 24

The audience is the actor: roll up for The Living Theatre 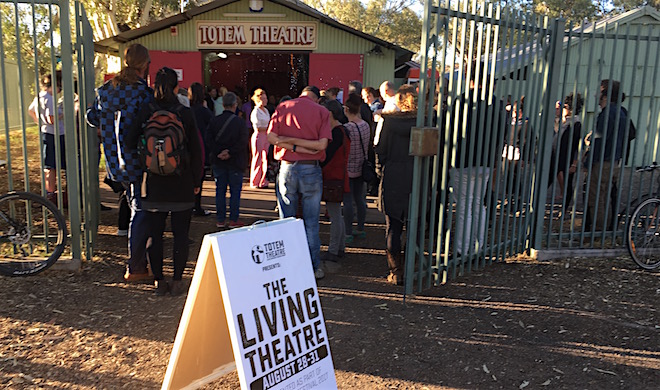 Above: The players in this production of the Totem Theatre – everyone present – used it only as a meeting point before taking to the streets.

A transformed cafe in the mall, a tree-shaded area behind Flynn Church, a street corner, a car park, the post office, the river bank – these were the venues of  The Living Theatre, a series of four events produced by Franca Barraclough and the Totem Theatre for the Desert Festival.

The idea is to take performance out of darkened auditoriums into the public space, but more than this, working against the passivity of a seated and silent audience member, living theatre requires participation. Turning up, you take more than the usual gamble on whether you will be thrilled or bored (or somewhere in between). This is still at play, there’s still the core theatrical element of you responding to the creator’s initiative and invention, and but there’s also an unsettling trepidation – what will you be asked to do, who willing will you be and how well will you do it? To some extent, you will be given the opportunity to thrill or bore yourself! 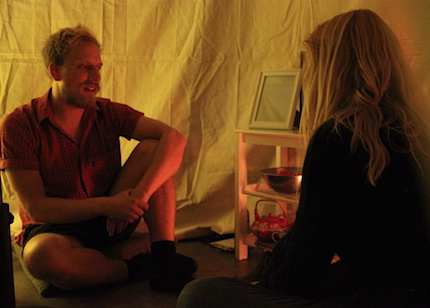 The intimate experience of Born and Bread was quietly thrilling. Through the glass door of The Goods cafe, you entered a womb-like space, warm, rosy-hued. First slight jolt. In this rather feminine environment, here was a bearded young man, Jonny Rowden (left), who by day you might have encountered on the coffee machine. You made yourself comfortable on a floor-cushion, Rowden opposite on another.

Soon he was talking in his soft Devonshire accent of thoughts of home and proposing to make bread with you. The bread (a damper roll) was both symbol and form. It evoked hearth and home – Rowden’s theme and a preoccupying one for many in The Centre, who like him are a long way from their places of birth and raising.

At each step Rowden spoke of his own experience and opened the way for you to respond in kind. It was up to you what you made of this opportunity, how much you wanted to reflect and share with this stranger become unexpected confidant. 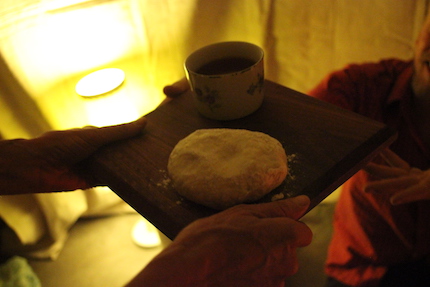 Between you, you developed script and performance for this one-on-one theatre, self-editing thanks to Rowden’s skilful structuring of the exchange. For some, I expect the experience opened up raw emotion, as theatre of the conventional kind can also do, but instead of ending with a curtain coming down abruptly on your thoughts and feelings, with Born and Bread there was  gentle easing out.

You left with the kneaded dough in your hands. On the footpath, there was a wood-fired oven for baking it, a comfortable armchair to sit in while waiting and the friendly presence of Frankie Snowdon, a performance-maker herself and Rowden’s partner in business and life. She stoked the fire, helped watch over the baking, wrapped the hot bread, generally safeguarded. Even as you walked or drove away, the aroma of the bread went with you, the whole experience lingering, until finally you bit into the hot crust and swallowed it down.

This was a generous and coherently thought-out theatrical experience, though necessarily for a tiny audience. Rowden sustained his effort for 16 sessions (20 minutes each, one after the other). Fina Po’s Hadopelagic Unit shared some of its characteristics, including its therapeutic ambience – again you were invited into an intimate, two-way process, to which you needed to give yourself in trust. (Actually, it was four-way, as she worked with a partner and for each session there was a pair of participants, which influenced how it proceeded.) 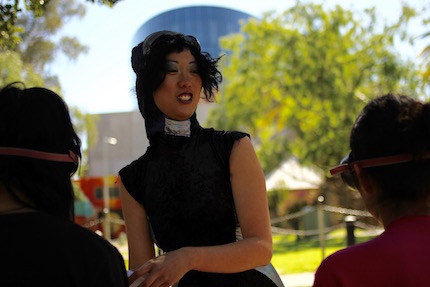 Like Rowden Po (right), who is a frequent visitor and artistic contributor to Alice Springs, was good at eliciting trust, although it was tested by being out of doors, an edginess that she was probably interested in and that is interesting to think about in relation to the public space – what kinds of actions and feelings are we comfortable with having on display there?

Her technical-sounding title refers to the deepest trenches of the ocean and Po sought to stimulate an imaginative experience of being there, in profound darkness, silence and airlessness. This relied to a large extent on props – you donned black goggles, ear muffs, a heavy weight was placed on your chest, and finally you were wrapped into a dark sack, where you could remove the goggles and in the blackness watch tiny transmissions of light as if from deep sea creatures.

There’s no doubt that it stimulated a reaction – I had feelings of alone-ness and mild panic and claustrophobia but in the end the clunkiness of the props got in the way of wanting to commit to the whole experience, whether as simply playful or more probing.

Po presented herself as a kind of tour guide to her fanciful Hadopelagic zone. Betty Sweetlove also adopted such a persona for her Historical tales by people that don’t write history, with her cute pink and white outfit suggestive of an earlier era in Alice Springs tour-guiding.

The evening tour was the opposite of an intimate experience, although again ‘script and performance’ were intended to emerge from the interaction between creator and participant. At lunchtime there had been six participants; in the evening there were about 60, a testament to the keen interest in history of many Alice Springs locals (although the group also included a dozen or so teenagers visiting from a Victorian high-school). 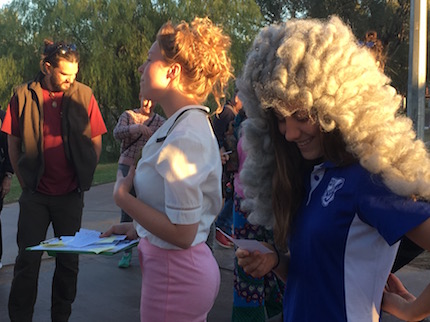 Sweetlove’s idea was to go for a walk and stimulate thinking about received ideas of history and the way they may be reflected in the construction of public spaces. She did this by having people read aloud various historical commentaries and then asking everyone to reflect on the themes the commentaries drew out in relation to the place we were in and in relation to ourselves as “historical actors” unlikely to ever be individually recognised as such.

Right: Betty Sweetlove gets a Victorian school girl to don the  wig of historical ‘authority’.

This was a lot to do on the go, perhaps too much, from outside the Totem Theatre, along the Anzac memorial walk and river bank, across to the heavily-surveilled corner opposite Todd Tavern (five CCTV cameras in the vicinity), to the car park outside Target (where we were invited to think about the impact of social policy targeting Aboriginal people), past the closed-down premises of the Firkin & Hound, to the post-office, the new Supreme Court, and finally the Foundation Tree at the intersection of Parsons Street and Todd Mall.

A lot of the thinking and talking Sweetlove prompted was very relevant to current debates here and around the country about how we represent ourselves and our past, and how this shapes our present and future.  However, as Living Theatre, it was a bit too pedagogical and Sweetlove needed to pare back her side of the script to allow that of the participants to emerge. 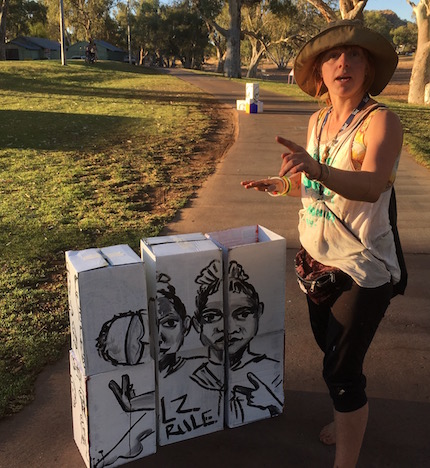 Finally, the fourth in the series, The Puzzle Continues. This may have largely missed its audience in being staged at Snow Kenna Park, well way from the festival hub at the other end of the CBD and in competition with the night markets, but the energy of its creator, Tamara (Tammy) Cornthwaite (left), is such that it will no doubt have other iterations.

Her idea is simple: engaging with other young people by deftly sketching their portrait and mounting it on cardboard boxes to create giant puzzle-pieces, inviting further engagement as they put the pieces together.

Cornthwaite guilelessly enters into conversation with all-comers and has an appealing graphic style in her artwork. Other ideas will soon grow out of this one. It’s theatre of a kind, certainly alive, and reaching out to an audience that bears thinking about, especially in our public spaces.

Live Arts are catching on, not only for their value as an artistic experience but as a way of enlivening public spaces, with the NT Government funding Live Arts programs in Darwin and Alice Springs. With The Living Theatre Barraclough and her collaborators built on her previous contributions in this area.

Below: Two of Cornthwaite’s subjects pose with their portraits. 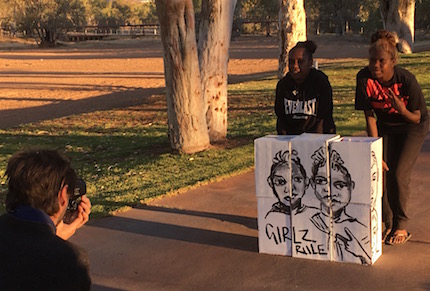 Below: A police officer stops to watch as Cornthwaite sketches a portrait. He knew the young girl posing by name and encouraged her to participate. 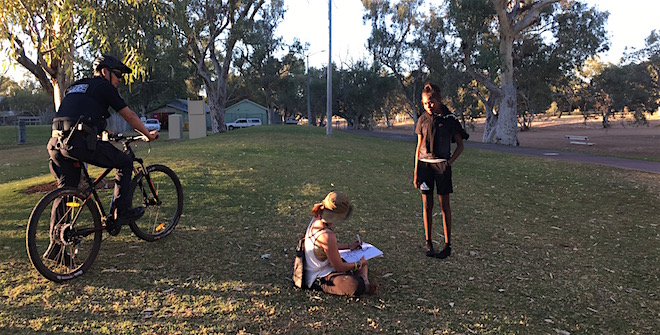 Finding and losing: self, love, home