Finding and losing: self, love, home

“Listen, let your body be the guide … lose yourself in the meantime.”

The message of this lyric, sung a cappella, was one part of the appeal of She Sings: A Red Home, a presentation by eight local women singer-songwriters as part of the Desert Festival line-up.

The audience responded, the chat dropped away, the bar staff at Monte’s took orders in whispers and delivered drinks on tiptoe. At the Sunday afternoon show even the little children took the cue, although a couple made their way onto the stage and into the arms of the performers.

We were borne aloft by women’s voices and their instruments as well as their talk of home, of the many different ways of finding a sense of belonging in Central Australia. The theme was taken up in the songs themselves as well as the stories the women told from the stage. 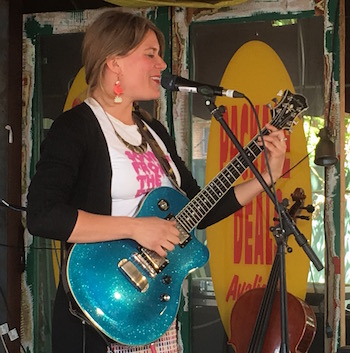 Steph Harrison (left) spoke of having to be more “internally resourceful” as an artist in Alice Springs, having to create your own experiences, while using the internet to stay in touch with what’s happening culturally elsewhere. She went on to sing a love song, “Tanami Dreaming”, about her son and the desert intertwined, both of that name.

Katelnd Griffin raised the issue of fire threat to the trees in the river, exacerbated by the growth of buffel grass after the summer rains (an issue curiously absent from the council election campaign just concluded). The link to her sense of home was in part through a painting of trees and smoke by fellow performer and visual artist Emma Stuart, that hangs on a wall in her house. It was also through the feelings of love and grief experienced by women she knows, the loss of other loved ones mixed with the loss of trees to fire : “She lovingly tends each burning bush to soothe her grief.”

Emma Stuart (below right) followed her onto the stage. Her instrument, the Saz, a Turkish guitar, spoke to “the gipsy in her mind”, the subject of her first song, dedicated to her parents, Morris Stuart of Desert Song fame and Barbara Stuart, also a visual artist. Emma first heard the Saz while living in “little Istanbul” in Berlin and later bought one on her travels to Turkey.

These days her home is in Alice, as a painter inspired by the landscape – “it talks to me, it’s my friend”. She can sometimes experience more love from nature than from humans, she said, she feels “held here”, in Arrernte country. The audience responded with clapping. The love song she then sang was inspired by her time here. 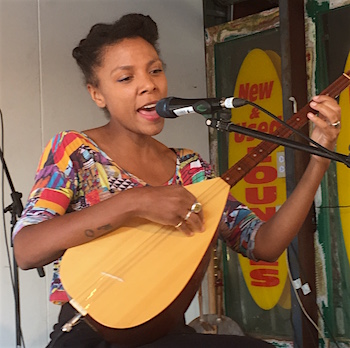 If Beth Uhe (who has also performed as BB Sabina) spoke to this theme I couldn’t quite catch it, but that took nothing from her intensely felt performance and fine musicianship. Her songs, she said briefly, are inspired by “the cathartic release you feel when you get art out there”. They delivered on this promise, especially the second, building to an impressive finale, looping her live voice in and around her recorded voice: “Immerse yourself, breathe out, expel …” And we did.

After interval, when the bar staff briefly got their voices back, Camille Bernadino delivered a laugh-out-loud experience for the audience, with a song dedicated to a surprising love object, revealed in its final lines: “Oh belly, what would I do without you? … I would die!”

She came to town for love, said this upbeat performer, stayed for work, got her heart broken but found love again. She gave us more songs, rolling through these emotions, a song of loss, and another of love, not so much for “the person you see naked” as for a “really good friend”.

Fine musicianship followed with Bec Matthews on the Kora accompanied by Ms Xavia (Xavia Nou) on the cello (below left). If you started with the political lyrics of Matthews’ first song, “Utopia”, you wouldn’t expect this instrumentation nor the rather ethereal musicality  she and Xavia produced, but it was all the more interesting for this.  The song expressed the frustration of working in “a system which has imposed itself on a people it is supposedly here to serve” and in which she is “inadvertently complicit”: “People on the ground have so little say … one size fits all”. Many will identify. 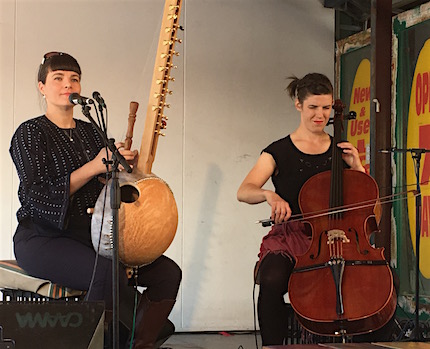 In her second song she struck a lighter note, swapping Kora for guitar, with the other women providing backup vocals, to deliver a 1950s-inspired “Banana Lounge Inferno”, all about getting through the Centre’s summers.

The stage was then Ms Xavia’s. She had curated the show, spreading the wings of last year’s Take my song … and run with it, which had included Griffin and Uhe, to take in other performers.

She too sang a love song dedicated to Alice Springs which has “brought me to life as a song-writer … allowed me to really grow”: “rest my heartbeat” was how she put it in her lyrics, carried along by a heartbeat cadence, contributed particularly by the backup vocals, with her voice gently swirling in, out and around it.

She put aside the cello for an auto-harp in the second song, “Horizons”, her “thank you to the landscape”, which she described as “stark” and “quite harsh” but “inspiring and fruitful”.  There was an underlying Celtic feeling to this song, in part the effect of the harp, but also of a dream-like yearning and spaciousness in its melody and vocals. 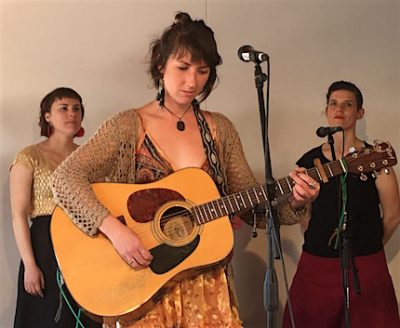 Candice McLeod (right, Uhe and Xavia in the background) was the final performer, “a traveller, a troubadour”, as Ms Xavia introduced her, but who too, on her third time back in Alice, is finding she can’t leave: the desert “unravels me”, it can be “real scary” but “rewarding if you allow it to be”.

Her first song “Truth, tell and tears” was written on one of her returns, when she was feeling reclusive and didn’t know how to integrate. Expressing these feelings through song was one way, looking through her window, seeing “these opportunities, they’re waiting and screaming out”.  One of those was hiking the Larapinta solo, which she subsequently did.

Her second song imagined the experience of an Aboriginal man, Jeremiah, she had met on her travels, a long way from his home, “feeling so lonesome [he] could die”. It demonstrated her vocal range, her high sweet voice deepening and ringing out with this painful emotion.

“Lose yourself” had been the invitation offered by the women at the start of the show. For two hours they made this possible, in thought, feeling and musical pleasure.