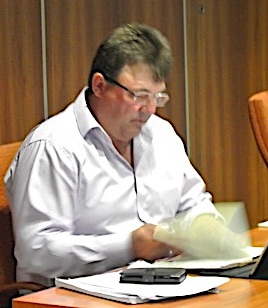 For Councillor Jamie de Brenni (pictured) the bid for re-election tomorrow will the continuation of his third apprenticeship, as he sees it: The first was cook, the second builder and this one is for Mayor.

Joining the council 18 months ago his resolve was crystal clear: “I talked to Damien [Ryan, the incumbent] when I went for the by-election. I originally talked about running for Mayor. To be honest, in the last 18 months I realised you need to do an apprenticeship. It is a tough job.”

But in four years he will be running for Mayor “and if Damien runs I’ll probably run against him. I couldn’t run this time because financially and family-wise I’m not ready.

“And the biggest thing is, you have to do an apprenticeship.”

Already the Deputy Mayor in the council ending now, his focus is on how local government can make and save money. He counts the balanced budget as one of its major achievements, and restricting the rate rise to 1.5%, a boon for the 9020 ratepayers.

The development of the workforce is an objective well under way: The council gang built the Ilparpa bicycle track for $643,000 – well below the external quote of $880,000.

Internal maintenance of machinery and the netball stadium – eagerly promoted and part-financed by the council – are two more accomplishments.

Cr de Brenni says a worry is that the council is running on just 68% of jobs filled – there just aren’t the people to fill them.

“It’s not our fault. That’s Alice Springs, just the capacity of the town,” he says.

His answer is to crank up training for both depot and civic centre staff, even if some of them, after training, resign “and ultimately benefit private enterprise as well”.

He expects a new source of manpower could be backpackers and international students, topping up their funds by casual day labour, “lining up at 6am if there are jobs”.

This would entice them to Alice Springs, spending their money here, extending their stay and ease the labour shortage.

Cr de Benni says a large slice of the council’s surplus is unspent wages which the Local Government Act requires the council to budget for.

He also wants the council to start a bitumen gang – there’s been none in town for seven years.

It costs $70,000 to just get a gang here, from Darwin or Adelaide, “and all the profits leave Alice Springs”.

Cr de Brenni says the tip should stay where it is until it reaches its capacity, governed by how much more efficient recycling can be made.

He’s not clear what should happen when the landfill is full: “Fifteen years ago there was talk about turning it into a footy oval.”

What about the sewage plant next-door, on two square kilometres of potentially prime residential land, unencumbered by native title, close to town, between two scenic mountain ranges? The waste could be processed by a recycling facility that would fit into one hundredth of the current space.

DE BRENNI: While you are waiting for people to buy the land, who’s going to pay for it?

NEWS: A loan with the land as collateral?

NEWS: The Mayor says the council is thinking about taking over street lighting from the government.

DE BRENNI: Taking over the street lighting is an initiative by the Local Government Association of the NT. We are the only ones who haven’t gone ahead with it. We’ve called for an audit of the asset.

NEWS: Could the same be arranged for the sewage plant?

DE BRENNI: Kilgariff isn’t sold yet. There are 500 dwellings yet to go out. Are we going to double-dip?

Cr de Brenni says if mining comes to town Kilgariff could provide significant growth as an alternative to Fly-In, Fly-Out.

The companies would be spending money on dwellings instead of airfares, in residential clusters for support, like Pine Gap does.

Local builders would benefit, and in time some of the mine workers would settle here for good, with their families: He says 96% of mining downtime is because of “personal situations” linked to the lack of support, and because families are spread out around Australia.

How can the council foster tourism?

“Our in-kind support for events is second to none in town, the Red Centre Nats, the Beanie Festival, Henley on Todd, and so on. And keep producing the infrastructure,” says Cr de Brenni.