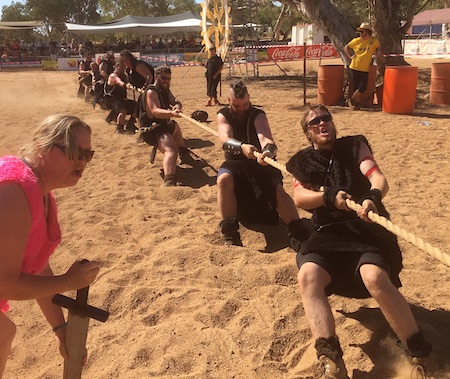 It’s the year of the Vikings: Their blood curdling screams and scarred visages began terrorising the town at the parade. They scared the children on the one-day-a-year beach. They won the tug-of-war and celebrated a great naval victory in their brand-new battleship (see video below).

International sports also had a red letter day: The JDFPG Aussies defeated the Pine Gap Yanks, by a pirate’s parrot beak, in the Americas Cup race.

It was the 56th Henley on Todd, the brainchild of Reg Smith who came to Alice Springs in 1946 as a meteorologist and should have know better about the chances of having water in the Todd River for a regatta.

The “HOT” this year is partnered by the Desert Festival.

After decades and hundreds of water jokes such as “don’t feed the fish” and giving contraptions names of aquatic vessels that look nothing like them, the bottomless boats still draw a national and international crowd.

The event is staged by the town’s thee Rotary Clubs which have raised millions of dollars for charity and with HOT created one of The Centre’s major annual events.

The T-shirt inscription “I am HOT” created confusion. A young lady asked me: “If you’re hot why don’t you take off that T-shirt” while a somewhat older female gave me a suggestive wink. Rotarians spent some time clarifying the acronym.

The hundred-odd members of the town’s three clubs usually recruit family members and friends to run the mammoth event. 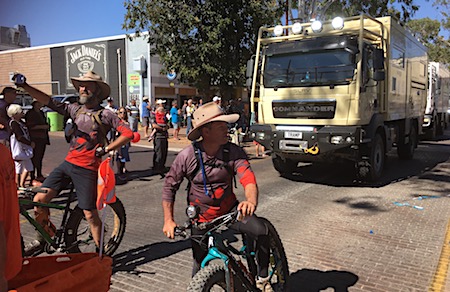 This year six Aboriginal boys from the Clontarf Foundation also pitched in with running of the events volunteers, and teenagers from Yirara College took out “boating” events where running fast in the sand is what it’s all about.

Rotary club members who wanted to be absent from their volunteer tasks required a death certificate and a letter from their mother, according to Commodore Mike Smith.

Although numbers are still being crunched he estimates there were about 4000 spectators at yesterday’s event, including visitors from Queensland, NSW, Victoria and South Australia, judging by the roars when MC Eli Melky asked the crowd were they came from.

Compared with the Vikings, a more benign appearance in the parade were two cyclists (above) who will  be crossing the Simpson Desert – “1100 sand dunes” they claim – to raise money for Beyond Blue.

The result of their fundraising is still uncertain but they seem sure to make the Guinness Book of Records for Simpson crossers’ support efforts: Three massive “SLRV Expedition Vehicles” and one smaller one will be tagging along with supplies and obviously the kitchen sink as well.

Declaration of interest: The writer is a member of the Rotary Club of Alice Springs.