Jenni Lillis: A council beyond rates, roads and rubbish 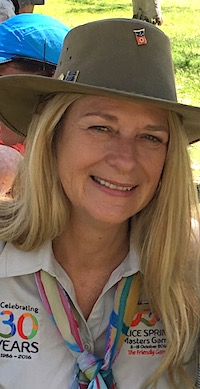 “I’d like to see the council  have a bit more influence on other governments.”

Does it mean that town councils should just stick to Rates, Roads and Rubbish or is it OK for them to put pressure on governments – Territory as well as Federal – to represent ratepayers in matters beyond their core responsibilities?

“I think any government in power would take notice of a local council’s written concerns and recommendations. Whether they act on them or not I’m not sure,” she says.

Ms Lillis has a long history of involvement with the CLP in Central Australia, including being the party’s number two Senate candidate last year and as the president of the local branch.

“But nobody will tell me how to vote in council,” she says.

“I am running as an individual for Alice Springs. It has been my home since I was knee-high to a grasshopper. Worked here, went to school here, had my children here.”

In her experience as a long-time local, council elections here have “generally been apolitical” and her assessment of the current field of candidates is that this tradition is continuing: “No-one is running on a political ticket, except for the Greens. It’s only the media that is categorising people into political parties.”

During the council term ending now and in the last election campaign the “Port Augusta solution” became a buzzword, briefly and with little impact, taking its cue from the legendary Joy Baluch (at right). She was the gulf city’s Mayor from 1981 to 1993 and from 1995 until her death in 2013. Her term of 29 years is believed to be an Australian record.

Her uncompromising dealings with the performance “in her town” of state and Federal politicians and public servants (she would reportedly order them into her office periodically) earned her the respect and admiration well beyond her patch.

Ms Lillis says: “She had the support of a lot of people in her town. I’m not sure how much that case pertains to ours. It would depend on the elected council members.”

Asked about the council’s five most important achievements over the past five years she nominates the non-denominational chapel at the cemetery, paying off the loan for the civic centre (something Cr Eli Melky really can take sole credit for), support for major events such as Masters Games and the Henley on Todd (an initiative by Rotary of which she is a member), fitting council buildings with solar panels, plus recycling and water management.

When more space is required for landfill it should not be at the expense of the Desert Park land to the west of the present tip, says Ms Lillis.

She says the next term’s agenda needs more of what the past term has achieved, plus “making the town safer” – not in the least to help the tourism industry by reducing anti social behaviour and vandalism by street kids.

We’re not alone with these problems, she says: “WA is in crisis at the moment. We must make people responsible.” She mentions especially parents’ responsibility.

The kids problem comes around “in waves”, since the 60s and 70s, she says. While the council does not have the power to do it themselves, it can make recommendations to the government, and Territory Families should step in, on a case-by-case basis.