From Standley Chasm take the staircase to heaven 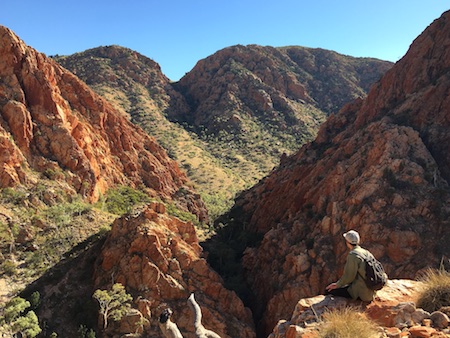 It is the staircase to heaven: going up step by step in a narrow fold in the range, you turn around every few minutes, and more and more of Larapinta Valley reveals itself, between craggy orange mountains that glow in the morning light, softened by tall graceful  gumtrees, cycads, calitris pines, spinifex and other native grasses.

And after what must be 1000 steps, the start of Section 3, mostly hand-placed rocks, you get to the top and the country just takes your breath away: mountains and valleys all around you, the most magnificent vista the West MacDonnells have to offer.

And down below, of course is that deep cleft, the sun shining into it for a few minutes at noon, and a lot easier to get to. It’s known as Standley Chasm or Angkerle Atwatye as the Arrernte people call this women’s dreaming site.

Half as far from Alice Springs as Ross River and a third as far as Glen Helen, Standley Chasm as an attraction is gearing up for a bright future, expanding what it offers to both tourists and locals alike. 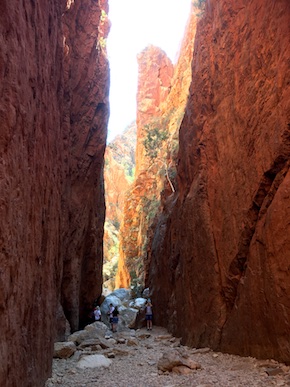 With the backing of the Traditional Owners, managers Ray and Carol Prunty  over the last five years have been steadily improving both  facilities and things to do.

When they arrived there was already a kiosk for refreshments and a small camping ground. Now they are serving restaurant meals Thursdays to Saturdays, on the deep stone-paved verandah screened from the campground by gumtrees. After sundown on chilly evenings they light a fire to add to the ambience.

We enjoyed fresh breads with homemade dips (tzatziki and hummus); porterhouse steak with black pepper butter and kangaroo stroganoff – both excellent – served with generous vegetable sides, and followed by warmed chocolate brownie with cream and key lime pie with ice-cream. (A five-course meal costs $55 and mains are $25 to $29.)

Caroline and Ray are all the way from Ireland, and their ongoing, ambitious improvements are nowhere near their end.

A playground for small children is being developed, and local musicians perform for free on Sunday afternoons.

The  Boomerangs Restaurant does not have a liquor licence, a result of the Alcohol restriction across all Aboriginal lands in Australia, says Ray.

“The Angkerle Atwatye operators, respresenting some 300 members of the local Aboriginal land trust, will not be seeking any exemptions for tourists.

“They have developed an interesting non-alcoholic wines, beers & cocktail menu, a first that we know of.”

On Saturday night the Alice Springs News Online was present at what is likely to be another milestone: traditional owner Rhonda Inkamala hosted a family from Minnesota, USA, at a campfire barbecue cooked by partner John.

Ms Inkamala is not your garden variety tour guide.

The Western Aranda and Luritja woman is multilingual and multicultural, fluent and literate in the Western Aranda, Luritja and Pitjantjantjara languages, and has a good working knowledge of other Arandic languages of Central Australia. 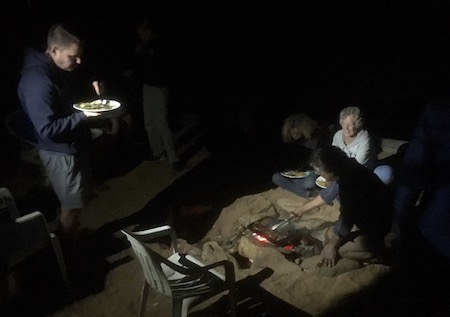 She was previously employed as the cultural principal of Yipirinya School, is a cultural adviser to Parks and Wildlife and the Central Land Council, and is collaborating with anthropologist Dr Anna Kenny on a book about Carl Strehlow’s Western Aranda language work.

She organises the regular  introductory language classes and painting lessons (you can paint your own souvenir).

A personalised cultural tour from her, culminating around the campfire in a small sandy clearing by the creek coming from the chasm, was the highlight of US family’s Australian visit, according to grandmother Janet and three generations of her family.

It doesn’t get any better, said Janet, as the family tucked into with their meal of kangaroo and vegetables cooked over the fire, after a day in the bush, digging for witchetty grubs and learning about bush tucker,  bush medicine and all the other things Rhonda was able to show and talk to them about.

They had been in Australia for three weeks, had done all the tourist things, in Sydney, Cairns, on the Great Barrier Reef. They’d been up in a hot air balloon in Alice, loved that, but this was far and away the best thing they had done.

It had come together just that day: Janet wanted a genuine Australian experience that was about more than entertainment, the tourism information office that morning suggested she call Standley Chasm, Ray put her in touch with Rhonda and away they went.

It will be the first of many, says Ms Inkamala. 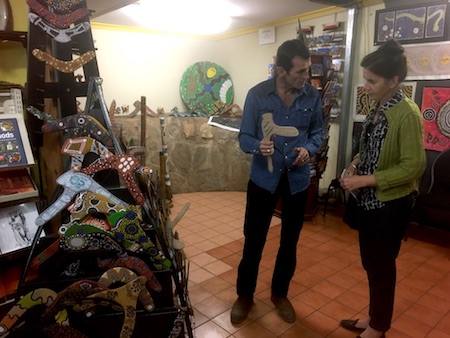 AT RIGHT: Ray Prunty in the souvenir shop.

Other Aboriginal kiosk employment is fluctuates between two and four local staff. The majority of seasonal employees are still non-Indigenous, “happy to spend their short working visa time out in the Central Australian bush,” says Ray.

A sideline for some in the Iwupataka Land Trust is painting souvenir boomerangs with individual designs, for sale in the gift shop for $25 each. 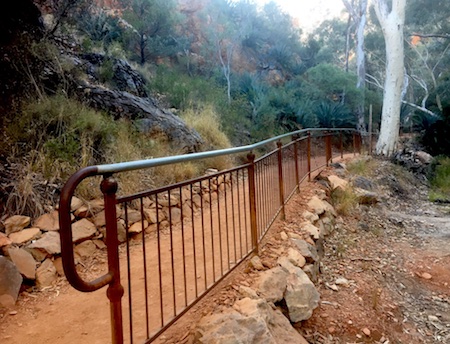 A lot of thought has gone into the walking track to the chasm – a bit more than a kilometre. Now suitable for wheelchairs “with assistance”, it has been raised above the creek bed, bolstered by stonework and with a handsome railing in sections: no plastic black bollards here, the rusted steel blending well with its bush setting.

The railing was made and installed by the Centre for Appropriate Technology, while the stonework was laid by Snapper John Tracks from Tasmania, with resort staff providing much of the elbow grease. 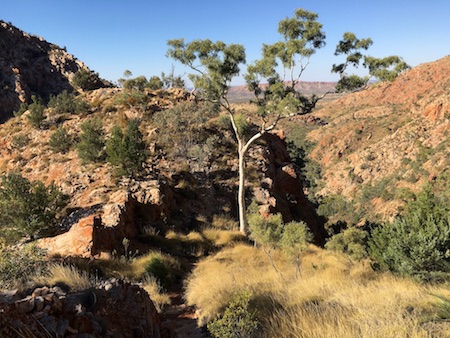