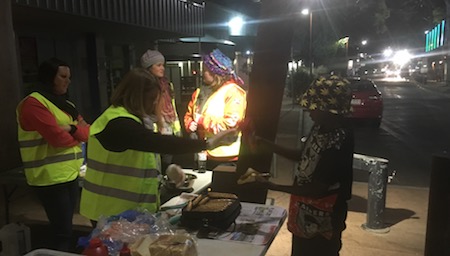 Why in the NT do the police have powers to put adults into protective custody, but not children? Families Minister Dale Wakefield will not give a direct answer.

But she does say police have the power to make Child Protection Notifications which can lead to Temporary Care Orders if a child is considered to be at an immediate risk.

This would trigger a response by a 24 hour hotline which could lead to the child being placed with foster parents.

The issue has been in the forefront of public discussion for weeks as a large group of children, some as young as eight, are roaming the streets at night. Some of them are vandalising property and endangering lives by rock throwing.

Ms Wakefield’s response does not inspire confidence when the efficiency of the local Territory Families office has been questioned for some time, and recently has been the subject of a scathing 16-page submission to the NT Royal Commission into Child Detention & Protection, from a departmental staff member who does not wish to be named.

According to the submission, the department here is critically understaffed, racked by gross inefficiencies and run by a bullying hierarchy more interested in procedures being followed than caring for children.

Ms Wakefield spoke to the Alice Springs News Online in an interview yesterday, together with a departmental spokesperson and Ms Wakefield’s media advisor.

We asked how come some 150 children, from age nine upwards, are in the streets in the middle of the night? Police say they cannot intervene unless an offence has been committed.

WAKEFIELD (at left): Police can respond if they think children are at risk of harm. By far the biggest reporters to child protection are police and education staff. Police also take kids home.

NEWS: So why are they not picking up young children in the streets at 2.30am?

WAKEFIELD: It depends on their risk assessment.

Ms Wakefield points to comprehensive policy changes being planned: “We’ve got to have a different response to what we’ve got at the moment. We are looking at strengthening that. That’s why we have our youth outreach service going.”

She says there are discussions with the NGO sector about different after-hours activities “keeping kids off the streets”.

NEWS: Should there be a facility that kids can be taken to, and which they can’t leave until a safe place for them has been found?

WAKEFIELD: You get good kids mixed up into the statutory system. We don’t want to stop kids from going to the movies.

NEWS: Surely an unaccompanied eight year old who is in the streets at 2.30am is at risk.

WAKEFIELD: If a police officer saw an eight year old walking around in the street at 2.30am they could make a Child Protection Notification and that would be acted upon by the after hours service.

NEWS: A child becomes an adult by age 18. Where do you draw the line?

DEPARTMENTAL SPOKESPERSON: It’s different ages at different stages, based on their individual circumstances. This is where it’s hard to give you exact answers.

WAKEFIELD: Police officers would be involved in the new Youth Outreach facility [based in the new office, which is not a drop-in centre, opposite Kittle Car Company]. We have a truly collaborative response, so we don’t have police officers feeling they are powerless in that situation, because there are a string of options they can take. [This government] started with a very low base of service delivery.

NEWS: Is there progress?

WAKEFIELD: I was out Friday night and there were very few kids around. My feedback from the Loiterers (a church group calling themselves Positive Loiterers) was that it has quietened down significantly.

NEWS: Are street kids selling sex? I have talked to people who say they do it for cigarettes and alcohol, possibly drugs.

WAKEFIELD: I don’t have any evidence of that. I think I’ve not heard of any prosecutions. I am not aware of any reports to me around specific cases. You would need to talk to youth workers.

NEWS: What is the rate of venereal diseases among children?

WAKEFIELD: We are responsible for the healthcare of all children in our care. There have been some significant reports of STI outbreaks that the Health Department have reported on.

Ms Wakefield says there is a “significant body of work” on curfews, including in 2006 by Robyn Lamely, now Independent MLA for Araluen and former CLP Minister.

Ms Wakefield says the CLP didn’t implement a curfew when they were in power yet the current Opposition Leader, Gary Higgins, is now calling for a curfew to be considered.

Mr Higgins relied on a “A Systematic Review of the Impact of Juvenile Curfew Laws on Public Health and Justice Outcomes” by the National Institutes of Health in the US, which said in conclusion: “The available evidence suggests that juvenile curfew laws appear to have a broad impact by reducing or preventing health-related and criminal outcomes of youth.

“However, the number and quality of the studies available limit these conclusions.

“More rigorous research is required before conclusions can be drawn as to the potential of juvenile curfew laws to serve as a primary prevention strategy to enhance youth outcomes.”

Chief Minister Michael Gunner said recently on the ABC that there is no evidence of curfews working.

Why did Ms Wakefield never visit Loves Creek where her government spent $2.4m (or $1.4m as is claimed by Bushmob – a large discrepancy yet to be resolved)?

WAKEFIELD: There was a review happening of all the wilderness camps so we made a decision not to see any of them at that stage.

NEWS: How many prosecutions have there been of parents for failing to provide the necessities of life to their children?

WAKEFIELD: You would have to ask the police.

WAKEFIELD: Police take that action. We take action of removing children. We are going though a process of looking at the [Child Protection] Act. There will be recommendations from the Royal Commission. We are looking at giving front line workers the tools they need to act.

NEWS: The outreach re-engagement teams have been on the ground for a couple of months. Additional grant programs are being developed for after hours activities. Is there more?

DEPARTMENTAL SPOKESPERSON: We’re working on a significant program of reform around child protection and youth justice to create very tailored solutions. We’re going to co-design within our NGO sector solutions for early intervention, for the family and children’s court that is actually is fit for purpose in the unique locations. Something that would work in Darwin may not work in Tennant Creek.

DEPARTMENTAL SPOKESPERSON: Some are being developed right now.

NEWS: When you can’t take kids to their home, because home is the problem, where do you take them? When the Royal Commission completes its report in September, it’s very likely it will contain recommendations which involve housing, education and disadvantage.

NEWS: Surely, the house is not the issue. The issue is who lives in the house and how they treat their children. What if both parents are drinkers and are violent? Where does the child go?

DEPARTMENTAL SPOKESPERSON: To a foster carer or other program.

MEDIA ADVISOR: There is the youth accommodation service, that’s for older kids.

NEWS: That’s just for a handful of kids.

MEDIA ADVISOR: There are other options as well.

DEPARTMENTAL SPOKESPERSON: We have a foster carer network, we have a residential care network, and we are working very hard to develop our kinship care network … in a culturally appropriate way. We have children who have been taken away at very young ages and who have stayed in care until they are 18.

NEWS: Do you have enough foster carers?

DEPARTMENTAL SPOKESPERSON: No, we don’t.

Ms Wakefield had said earlier that early intervention was the focus of the Government. The department spokesperson said that this meant supporting families and children early to stop incidents occurring in the first place.

NEWS: How many electronic bracelets or anklets have been used on young people?

DEPARTMENTAL SPOKESPERSON: It’s a bail condition. You have to speak to the courts.

NEWS: Operation Flinders, which was announced when the Loves Creek arrangement with Bushmob collapsed, was used first in 2014 by the CLP Government. Has there been an evaluation of that?

DEPARTMENTAL SPOKESPERSON: There is a lot of data that talks to the effectiveness of wilderness camps.  Operation Flinders does not replace any service at Loves Creek.

She says “significant amounts” were spent on facilities of the Loves Creek wilderness camp with plans for more expenditure. $30,000 was spent on grading the road only a couple of months ago.

She says the department will find a supplier “who can efficiently provide a wilderness camp service”.

NEWS: There is much public comment about holding parents financially responsible for damage done by their children.

PHOTOS: A boy getting a sausage sandwich from women from the FOCAS and Positive Loitering groups in the Mall. BELOW: Wildnerness camp. NT Government publication.