Home Issue 6 Hard-edged Alice could do with some softening: architects
Issue 6Volume 24

Hard-edged Alice could do with some softening: architects

After a week in Alice Springs the cycling architects, Bobbie Bayley and Owen Kelly, set out last Sunday for Uluru, via Wallace Rockhole and the Boggy Hole track. They were expecting to take about five days to reach The Rock, the heartland of the country and of their 10-month, two-wheeled  “grand section” exploration of how Australians inhabit their places.

Before they left Alice, they gave a presentation of some of their observations and suggestions for the town, choosing one of the entry points to the Alice Plaza to gather their audience (top). The location was in keeping with their theme of “edges”, how the town treats its interfaces, both visible and invisible – between public and private, commercial and residential, outdoors and indoors, the built environment and the landscape. This theme had been suggested from their very first impression of Alice as a town of many fences, high in number, wide in variety.

The fences here are “thought about, a rare thing”, said Owen. “There’s an incredible vitality of fences but often what was not considered was the edge condition.” 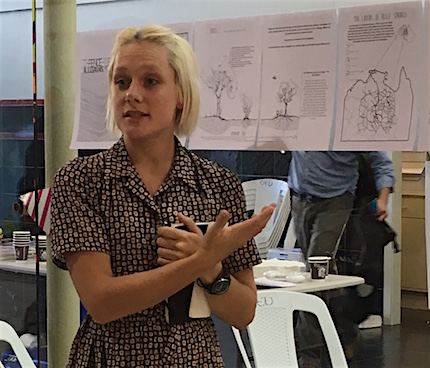 Look at what happens on nature’s edges, Bobbie urged, in the riparian zones where two ecosystems, such as land and water, meet in a rich and lively co-existence. These zones provide a metaphor for what can be achieved in our built living environment.

The pair’s study method is to walk, cycle, look, think, feel, talk to as many locals as they can along the way, draw, and feed back. This last is important: it tests ideas, allowing them to see if their observation skills are right; it’s an exchange, have they got it right or not.

For Alice, they pulled their ideas together in a “zine”, posted on the shop window for the presentation. They also distributed a few folded and stapled copies, and when they get some online time, it will be uploaded to their blog.

They observed “an interaction with types of edges” here that they haven’t found anywhere else: although the town is in the geographical centre of the content, “it is on the edge in many other ways”: at the edge of being a town or a city, at the edge of several deserts, at “the ‘cutting edge’ of cultural understanding”, and on the edge of developing world conditions in health and education.

Turning their architects’ eyes to the situation, they reflected on the different ways in which Aboriginal and other Australians think about borders. “We look at layers,” said Bobbie, “we find it’s a really good method to use, you start to understand how complex a place is.” 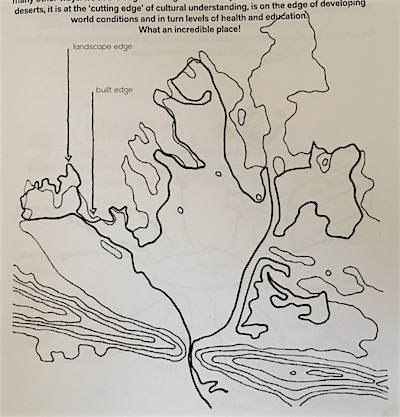 For example, they could see that desert edges and Aboriginal language group edges align in many places, in contrast to the mostly straight line state boundaries of the European system. Overlaying the two shows not only different geometries but reflects “a completely different approach to inhabitation”.

Right: In contrast to state boundaries the town’s edges follow the landscape, as Bobbie and Owen’s map shows. The thicker line is the landscape edge, the thinner line, the built edge.

Their limited time had not allowed them to develop any kind of case study reflecting an Aboriginal perspective. This was partly due, they suggested, to “a critical lack of edges for cultures to intermingle on a voluntary basis, where activities are based on mutual enjoyment and liveability”.

Creating such places in town would be a “really strong future project that could make massive inroads on reconciliation”, said Owen.

Interestingly, just a couple of days later council candidate Donna Lemon spoke of her ideas for a Reconciliation Park in the town centre, as a place for people of all backgrounds and ages to come together.

In contrast, observed Bobbie and Owen, the town’s many “hard edges” at present act against this possibility and make the public realm far more insecure than it might otherwise be by limiting “passive surveillance”.  This term refers to the informal ways in which people become aware of what one another are doing.  “Eyes on the street” is another term used, whether those eyes are inside looking out, outside looking in, or meet in passing. 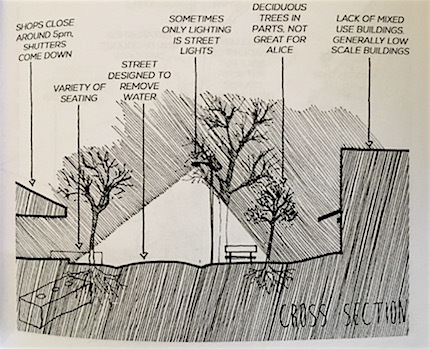 Some parts of town get this right, by daylight anyway. Bobbie and Owen appreciated what has been achieved along the Parsons Street section between the Foundation Tree and the Tree of Significance on the banks of the river – the connection between the trees and to the river acts as “a clear geographical wayfinder”. The landscaping, the low-scale buildings and many places for people to sit and stay also contribute to “a pleasant street character”.

The problem in the area is that it has limited “activation” at night – no-one lives there, except for travellers at the YHA, and most businesses are closed (leaving CCTV as the only consistent “eye on the street”).  And this of course extends to the mall (above), where from 5pm “roller shutters clamp down” on any reason for being there “other than the nightclub”. Thus there are “very few eyes or ears on the street for surveillance and security” and, for the most part, it is in darkness expect for street lighting.

“Night is as important as day” was one of their suggestions to keep at the forefront of thinking about creating a more liveable town.

Their assessment of the edges of the new Supreme Court building was damning, especially in comparison to what is now the Local Court building and the courthouse lawns across the road which act as a kind of “common room” for the town and especially court users. The clear visible access to the public entrance of the courthouse make the lawns “an extension of the court’s waiting room”, and comfortable at that, with grass to sit on and shade provided by evergreen trees.

Such an area is entirely missing from the new Supreme Court environs (as previously noted in these pages): “No shade, views or seats make this hard paved court entry less than inviting, not to mention boring. Dark tinted windows are quintessential hard edge materials and don’t provide anything for people to engage with or respond to. 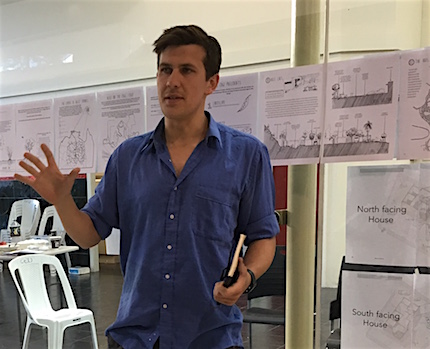 “The scale of the new court compared to the approach is neck hurting, literally – try looking up. There is nothing here at human scale. Not a great symbol of justice.”

Their case studies around the suburbs identified a wide variety of approaches to delineating public and private space:

A low transparent fence does it with “incredible softness”.

A low solid fence, often using local materials, is a firmer delineation while also providing a place to sit, adding to presence on the street, and doesn’t impede views (sketch below).

A mix of high and low plantings provides a feeling of privacy while retaining views and increasing “passive surveillance”, especially if there is an outdoor living area facing the street.

A carport or parking space, with often a car in it, can act as a kind of fence. In their example, there are also views to the street from most rooms, with light from the windows adding to the light in the street at night and contributing to the perceived security of the area. 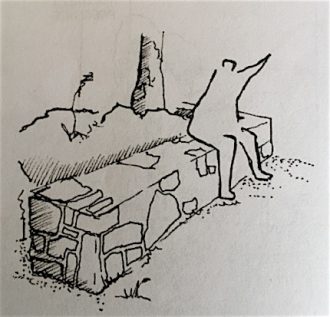 Very bushy gardens, with dense low, medium and high plantings, create privacy and are great for birdlife but don’t contribute to street life nor a sense of security on the street.

Some people have achieved the best of both worlds with part-opaque, part-transparent constructed fences, some showing additionally sculptural flair.

The tall transparent fence is better than what they dubbed the “F%@ck Off Fence”, tall and opaque, but the message from both is an unwillingness to engage with the public realm of the street – “to connect with what’s going on … talk to your neighbours, be part of the community”.

Solid fences also stop wind flows and contribute to an “urban heat island effect”, raising the temperature of the town.

Among their suggestions for Alice to think about was the retention of stormwater on site –  “largely unconsidered” . At 8 Hele Crescent they had found a unique example of this, among  other merits, such as the site’s multiple uses by day. These include “a banging little cafe”, a framing business, a design studio and an art gallery, contributing to a high level of passive surveillance.

Night-time though is another matter and a tall fence topped by barbed wire speaks to the risks sensed by the residents and the absent business-owners.

Water running off the sacred hill at the back of the site is captured in a retention pit then channelled through soakage pits where it  feeds the trees, creating a cooler environment, pleasant for people, and for birds and animals. Water tanks capture the roof runoff which is also used on the garden.

There is soft planting along the street edge along a winding footpath, “encouraging people to stop and linger and have a conversation”.

All of this creates at 8 Hele (below) “an active oasis” in what might otherwise be the desert of an industrial estate.