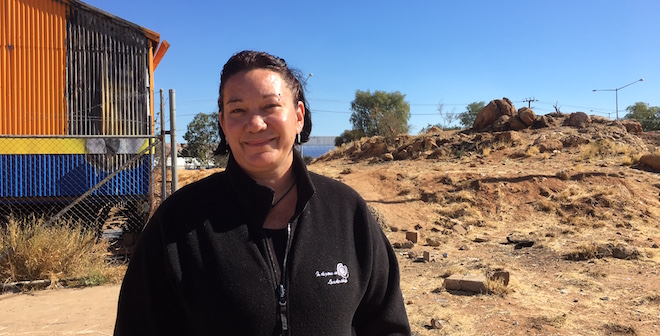 Above: Donna Lemon behind Beaurepaires (shed on the left) and with the puppies sacred site on the right.

It’s a site that expresses the pain and possibilities of the town: the large vacant area behind Beaurepaires has been one of the places where young people  gather late at night and sometimes get involved with antisocial behaviour if not crime. The low outcrop of rocks right alongside is a sacred site, one of the most abused in the town area.

Donna Lemon, who is standing for election to council, acknowledges the damage inflicted on both: businesses “copping the brunt of property damage” and the devastation to the site. She’s also got some answers.

She drives past this corner every day on her way to work: “It guts me to see those puppies haven’t been taken care of, that’s the story for that site. 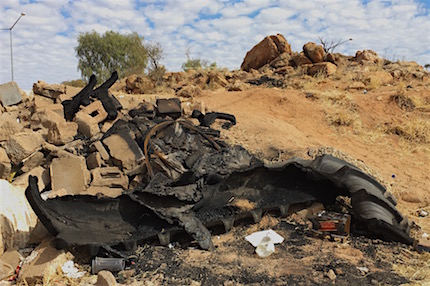 “We need to preserve our sacred sites,” she says. It’s a vital part of the cultural orientation which senior Arrernte men have stepped forward to say they will promote, an orientation that rests on respect – for one another and for country.

Left: Burnt tyres, rubbish and rubble on the puppies site on 5 July. Yesterday the tyres and rubbish had gone but the rubble was still there.

Then Ms Lemon looks across the road: “You’ve got rocks – why are there rocks on the highway when we’ve had rock-throwing incidents?  Remove those rocks and pave.”

A practical suggestion but the next part of her plan, developed with her campaign manager Ken Lechleitner, is more visionary.

The vacant area behind Beaurepaires could possibly be used for what they’ve dubbed a Reconciliation Park – and if not on that site, somewhere in the centre of town.

Their vision is for a venue “inclusive of our community, black, white and brindle”, there to “bridge the gap, close the gape, cement our future”.

A place for people of all backgrounds and ages to congregate, talk together, play basketball, for grandmothers to have a card game if they want, for babies to have their climbing equipment, teenagers their skating area, a barbecue where dads could have a yarn.

A place that acknowledges the past: “Those things happened, we can learn from them. We are where we are, the good and the bad, but we can work towards a reconciled, prosperous collective future.”

“In my head it’s there, I can see it!” says Ms Lemon, lamenting the de facto segregation she sees around town – a disco where only Aboriginal children go, a church where people from multi-cultural backgrounds get along, but where there are no Aboriginal people.

She works as a health educator for Congress and speaks as “an Aboriginal woman from this country”. 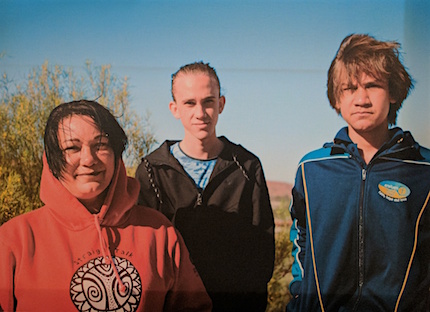 Her grandfather, Tommy Braun, was “one of the reasons we have a railway” and he “had the stories” for this country, his traditional country. Her grandmother, Theresa Braun, was a Waramungu woman; her mother, Colleen Lemon, was known as an avid letter writer on Aboriginal rights issues, earned an Associate Diploma in Aboriginal Studies and met Bob Hawke. She took Donna as a young trainee of the year to Canberra  where they met John Howard.

Ms Lemon is also speaking as a single mother of two teenage sons “who are A-grade students at school” – Johvan and Thyce Miles, pictured with her.

She is active in the community group, FOCAS (For Our Community Alice Springs) – involving about 20 volunteers out on the streets in the centre of town, Thursday, Friday and Saturday nights, trying “to show these kids there are people who care enough”.

Care about them if they’re tired, hungry and cold, but also care about the trouble some of them are getting into and the damage they’re doing. When she first went to the Beaurepaires area a couple of weeks ago, she found the sight “heart-wrenching”. She couldn’t believe there were no cars in the Peter Kittle yard: “It made me realise the extent of where we are and we shouldn’t be there.

“These issues were raised several years ago. I’m 40 now and the town was going through this when I was 13. But the things we were doing were innocent compared to what kids today are doing. We might have stolen a pair of shoes from a front door because our parents simply didn’t have the money to buy shoes.

“Today there’s no respect. There are kids who think they are 10 feet tall and bullet-proof and can be street savvy, walking around in groups and intimidating people. What makes you think you can walk around the town as a 10-year-old and bully somebody?”

She strongly supports the move by senior Arrernte men to step in and say “this is not our way, this is not the way we behave when we come to town. The point is when you come to town you have respect.”

That goes for visitors to town too, wherever they may be from, who are drawn here by big events. When they leave “we’re left to deal with what’s left over”.

She says cultural authority among parts of the community has been weakened: “A lot of our old people have passed away. In that process, we were too busy being teenagers to learn, we’re relying on the families whose culture is still strong to help here.”

At the same time “there’s a generation of children that didn’t have the support that my generation did. And very rarely do they get a second chance.”

Above: Donna Lemon (long hair, white headband in the centre of the photograph) with fellow graduates of a Desert Knowledge Leadership Program in 2012.  (In the front row, far left, is outgoing councillor Jade Kudrenko.)

What can council can do?

Collaborate: police, council, local business, organisations, all need to work together, avoiding duplication and waste, using whatever resources available, including advocacy. This could include lobbying for a residential facility to take young people who haven’t got a safe home to go to  – “like a hostel, a CAAAPU for kids”.

“These kids need to learn like skills, not disciplined with a strap, but it needs to be stern, there needs to be cultural authority there, it has to be at least three months long, court-ordered if necessary.”

She’s talking about something like a protective custody situation for the 50 or so young people who are constantly out at night and particularly vulnerable to committing crime or doing silly things.

“Half of our kids in care are not safe. The focus with youth services should be to prevent things occurring.”

It’s time to stop the blame game, she says. She believes strongly in parental responsibility and firm discipline but says “you could be the best parent in the world, and your child could still be wayward. A lot of parents bend over backwards for their kids, I know this, half of them are family.”

The reality is also that some children are not in the care of their parents: “They might be in the care of grandparents who may not even be aware they are out and about.” The child might have been at home but jumped the fence and gone out again: “These young people are smart, we might under-estimate them.”

This is why it’s important to have community members out in the streets “having a presence, hanging around – talk to you mob, what’s making you tick, why are you out.”

She says there is no easy solution, but is keen to “work with the ideas the community mob have, they’re the ones going though this, they’ve got some good ideas.It’s a case of trial and error, I’d rather keep trying new things that may work, than not do anything at all.”

She believes everyone has a right to “a slice of the pie”, but has turned that notion into a “slice of lemon”, for obvious reasons. Her campaign materials feature lemon slices alongside eight headings under which she can put “every single issue” confronting the town.

They are broad brush but the emphasis is interesting: the first “lemon slice” is supporting local business. She links this to another which is “civics orientation”.

People, including the young, need to understand “what business does for our community”. This includes understanding the pressure businesses are under in the current climate, with insurance going “through the roof”, and understanding what would happen in town if they close and leave, as some have done and others are threatening to do.

“Civics orientation” is also necessary to help people understand the legislation and by-laws as “the rules under which we live as a community”.

“They aren’t easy to understand,” she says, “and in particular Aboriginal people only know about them when they get into trouble for doing something under the by-laws.

“It’s about informing people what they are, how they work, who they affect.”

But, she says, by-laws need to be “inclusive, not create a divide in our community, not them and us”, signalling that some of the public place by-laws should be up for discussion.

She mentions Aboriginal artists selling their paintings in the mall. A public places by-law requires them to pay for a permit to do so. It was designed to reduce competition from them for the commercial galleries in the mall, a measure notably opposed at the time by Papunya Tula Artists, the mall’s most prestigious gallery and Aboriginal-owned.

Says Ms Lemon: “They are the original painters, council should support them to be there. A lot of people think it’s a humbug thing, but it’s not. You even have some doing the paintings while you stand there, they are trying to make a living. You are probably looking at traditional owners of this country, doing these paintings.”

They are also an attraction for tourists and “if tourists aren’t coming to spend money in Alice, we’ll all suffer.”

She is concerned about the damage to the reputation of the town as a place for tourists to visit, with some of them robbed, stabbed, having their cars and property stolen. People need to understand the consequences of this, so  another “lemon slice” is about supporting the sustainability of the industry, including by developing codes of behaviour around how they are welcomed and treated.

The partnership with Lhere Artepe, the native title holder body, will be critical for council to make progress on these issues. While council has an MOU with the organisation, it has been largely without effect until recently.

“We need to watch this space,” says Ms Lemon, “there’s a really good strong CEO and board now.

“This is how we’ll shape the notion of social capital, investing in each other, building trust on both sides of the counter.

“If e’re not giving each other a chance to prove ourselves, we won’t move forward.”