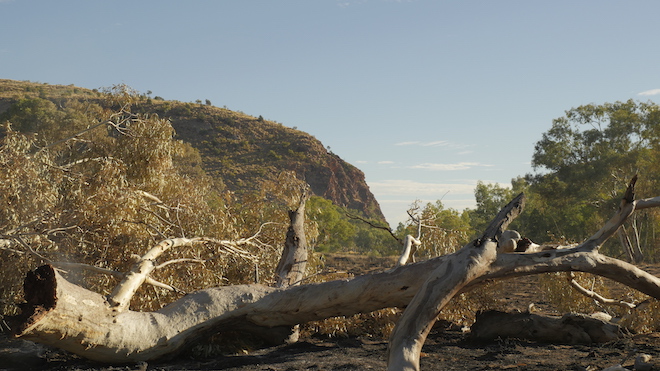 Above: Fallen giant south of Heavitree Gap in the devastation of April this year. Thirty-eight trunks fell or were severely damaged by fire. But there are ways we can stop this happening.

“River Red gums are part of the heritage of Alice Springs. They create the beauty of our town. [They] guide our journeys in town or from town to airport … But the trees are at risk. How would Alice look if the river was reduced to just Buffel grass and sand – with no trees?” 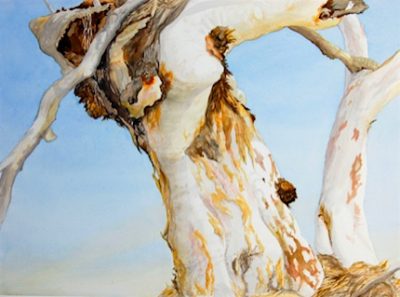 So asked Henry Smith at a meeting last Sunday at Olive Pink Botanic Gardens. Respect for our trees and such dire forecasts were foremost for people who met. Fires have killed, felled and scarred hundreds of River Red gums along the Todd River and through the spine of our town. How to prevent and reduce the fires and how to save trees – and the social and natural ecosystems they hold– were the main questions at the meeting.

As an artist and art teacher, Henry has painted and sculpted more than 40 River Red gums; some of his trees have since vanished into ash and smoke. Like most at the meeting, Henry is also active in landcare being one amongst a group who volunteer hours of labour to remove Buffel grass, protect trees and restore native habitats. The group is small relative to the need on lands around Alice. The meeting complements and will inform government-led process to better manage fires in the Todd River. 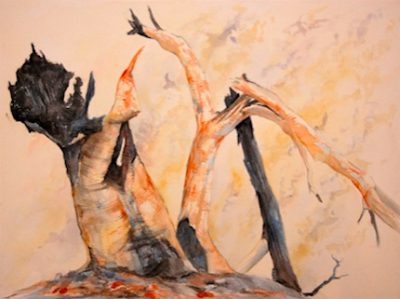 Trees, some more than 300 years old, are being lost to wildfires. Alice Springs residents and visitors see blackened areas of burnt grass and charred trees including along the Todd River. Burnt areas are concentrated near Ntaripe (Heavitree Gap) and north Stuart Highway but occur all along the river including its linear islands.

Left: Henry wrote: “I loved this tree, it had such character …  Over the time that I knew it, it was in constant change, a living breathing large sentinel watching, providing a home for birds and creatures.”

These are neither customary burns nor controlled burns. Extreme Buffel grass fuel loads, rising temperatures and diverse ignitions contribute to the escalation of this problem. (For newcomers, Buffel grass is a weed that thrives with hot season rains and burning.)

Community members and senior staff of government agencies are collaborating on strategies to reduce this loss of River Red gum habitat. They have met twice this year and the Sunday meeting was for volunteers to maintain momentum as we anticipate another meeting. Agencies including the NT Fire and Emergency Services, the Department of Natural Resources, the Alice Springs Town Council and others with formal and varying roles and responsibilities. NTFES have responded to hundreds of calls to ‘grass fires’. They douse trees but can’t put all of them out. 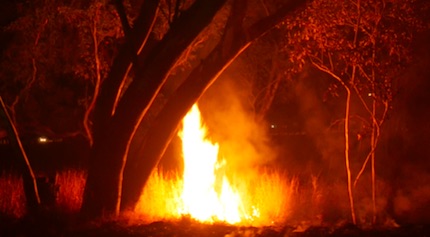 The loss of Alice Springs trees is an old but intensifying problem. At the meeting, Mike Gillam remembered “in 2011, through the centre of town the river was on fire; trees burning everywhere.” Mike has repeatedly alerted the public to values of the trees and written of their neglect.

In 2011 the document he submitted to government agencies called for a revision of fire management practices. That document was re-submitted to relevant agencies in 2017. At the Sunday meeting, we heard of earlier concerns raised in the 1990s, 1980s … back to 1888!

For example, there was a 1994 Todd and Charles River Master plan. But both the public and public servants have limited evidence of its recommendations being implemented. A hope is that with forthcoming hot weather and extreme fire risks we are better prepared than in 2011. 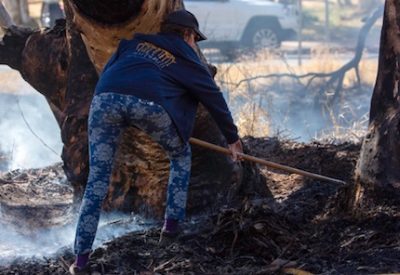 Amongst volunteers, views about the willingness and capacity of agencies to reduce burns and save burning trees range from optimistic to sceptical. So certain individuals are acting themselves, quietly and productively. Some are working to prevent burns. Others, to extinguish burning trees.

Left: Fiona Walsh works quickly to chip and rake Buffel grass root bases back from tree trunks to reduce the risk of scars that can contribute to internal burning. Burn SE of Taffy Pick crossing.

Since 2011, Marg Johnson and Dr Ken Johnson have removed Buffel grass from the Todd’s east bank between Stott Bridge and Undoolya Causeway (Alice Springs Resort to Casa Nostra). Today it is the only section of the town’s river where gums have not suffered burn damage. It is a rich example of best practice in caring for our river.

Peter Latz, Mike Gillam, Henry Smith, myself and others with tools and expertise have successfully put out burns in large older trees. We respond ideally before and often after the fire brigade to rake, water and block basal holes that allow air into the burning hollow trunks. We’ve assisted NTFRS and vice versa.

Henry spoke of the beauty we see in River Red Gums. The trees also offer us humans a green vista, shade, texture, more than 14 foods, medicine and resources. On Arrernte country, Apere (River Red gums) are Ancestral beings who mark Altyerr (Dreaming) places and story lines in this landscape. Many people have written of River Reds as homes to galahs, cockatiels and other birds and animals; each is ‘nature’s boarding house’ or a ‘magic faraway tree’. The trees are community assets.

Hollowness is one exceptional feature of River Red gums. It is both their strength and vulnerability. As hollows form, Reds can grow larger and also host wildlife. But repeated hot fires scar the tree bases. Buffel grass burns dwell and penetrate the scars; then the trunks suck in air and fire upwards. Old and young trees burn inside like multi-branched furnaces. So putting out internal burns and smoulder requires special techniques. 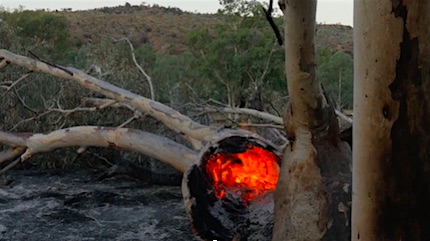 What can you in the community do? The best prevention is to reduce Buffel grass and allow native plants to flourish. This is possible with persistent and strategic landcare methods. Adopt a tree or adopt an area of bush and join Alice Springs Landcare with people expert in Buffel control.

Left: The hollows of River Red gums opens them to internal burns. It is possible this tree south of the Gap could have been saved by further action after NTFRS visited the area.

When you see grass or trees on fire, note the street names, dial 000 and ask for the Alice Springs fire station to respond – the earlier the better. Threats to a tree that is older than you, I or any of us is an ecological emergency. Contrary to the views of some, it is possible to extinguish fires in burning trees.

With upcoming Town Council elections, the condition of the river must be on the political agenda of candidates. Advocacy for more resources and trees as a higher priority in government work programs is needed. This is a cross-sector issue of concern to Arrernte people, residents and businesses. We have to collaborate with our public agencies to jointly take responsibility to better care for our river and its trees. 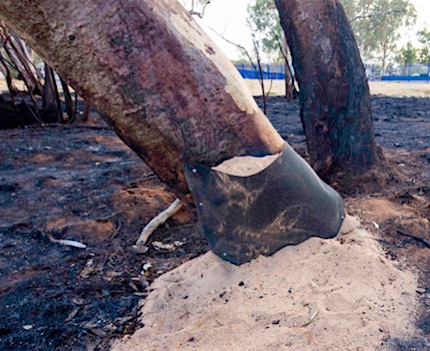 The river is less a battleground to conquer or a playground to exploit and more like a cathedral or national park to honour and respect.  As friends or families, we can walk or ride along the wonderful bike paths of the riverside. The stories of our lives in Alice are interwoven with the trees. What would our town be without its River Red gums?

Right: One effective technique has been to pack basal openings with sand or mud. This reduces air inflow into the hollow trunk and so helps to suffocate the internal fire. Burn by St Philip’s College after NTFRS had dowsed it.

Today, Sunday 30 July, at 2pm at Olive Pink, there is a launch of the online register of Significant Trees.


Dr Fiona Walsh is an Ethnoecologist with a particular passion for trees. See a recent photo album on flickr here. She also has long experience in customary burning and directed and wrote the documentary ‘Waru: Burning, bushfoods and biodiversity’ which screened on SBS and SBSview for 12 months in 2016.

Below: A volunteer blocks hollows on upper limbs to reduce air flow into the burning trunk. The plugs are later removed to re-open the hollow for wildlife. 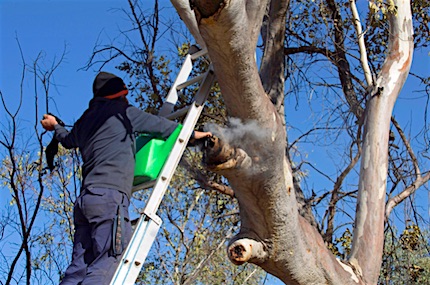 Below: A qualified, highly experienced arborist volunteers to dowse high burns in hollows. This contributed to saving another tree on a burn by St Philip’s College. He uses harness, ropes, ladder and much skill and fitness. 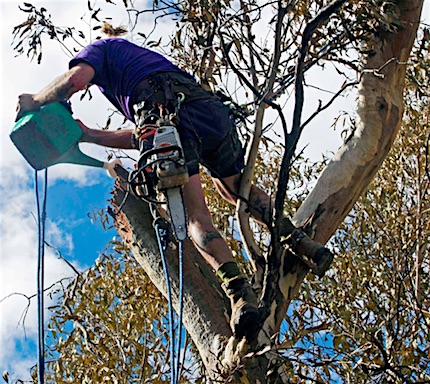