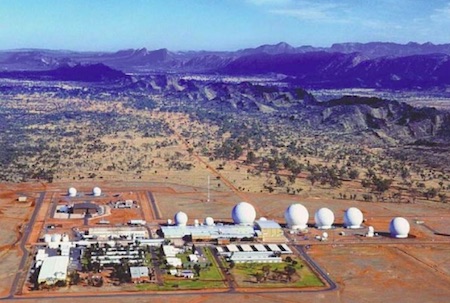 Sir – The Alice Springs Peace Action Think Tank (ASPATT) believes that 50 years of Pine Gap should be a time for critical review, and not a cause for celebration.

We know from years of research by experts like Professors Richard Tanter and the late Des Ball, that the Pine Gap Joint Defense facility plays an intricate role in supporting US-led drone attacks, by contributing targeting data to drone operations, including assassinations on suspected terrorists overseas,  which are illegal under international law.

We also know from research into drone warfare that it is not ethical, nor surgically precise and doesn’t stop civilians being killed. In fact, far from reducing the destructive effects of war or terrorism – drone strikes increase these effects.

Ms Alex Edney-Browne, a researcher on drone warfare at the University of Melbourne and a spokesperson for the Independent and Peaceful Australia Network (IPAN) has argued that drone warfare creates devastation to innocent families and children in countries such as Afghanistan, Iraq, Pakistan and Yemen.

She says the missiles and bombs that drones drop produce deadly blasts that endanger the lives of everyone near the scene of the attack.

Moreover, the intelligence used to identify targets is often faulty, and many civilians have been killed as a result.

During her time on the ground in Afghanistan, civilians expressed to her that they live in fear “that they will be the next innocent victims”.

This be should of great concern for Alice Springs residents and all Australian citizens particularly as experts such as Tanter have pointed out that Pine Gap’s role in the US nuclear war plans and even major conventional war make Pine Gap and therefore Alice Springs a “pretty high priority nuclear missile target in the event of a major conflict between the United States and Russia or China”.

All Australian citizens should also be concerned about the enormous level of information collected by Pine Gap on ordinary citizens, who are not suspected of terrorist activity, such as who they are communicating with on their mobile phone.

We need to be asking ourselves as a nation whether the continuation of the military alliance with the US is actually in the best interests of our country.

In a recent public statement, IPAN has called for Australia to assert its sovereignty as a nation, take control of its foreign policies and review the presence of US bases and troops in Australia.

It is time we started promoting genuine peace and security, human rights, a sustainable environment and Australia’s independence as a nation.

Jonathan Pilbrow
ASPATT Convenor and an NT representative on the Independent and Peaceful Australia Network (IPAN).