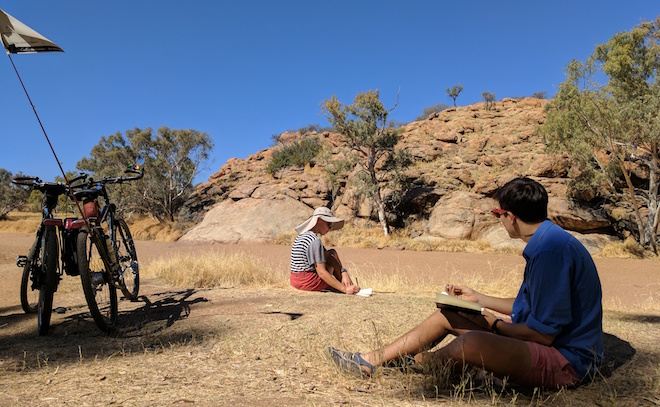 Above:  Dismounting from their trusty cycles at the original Alice Spring, Owen and Bobbie were thinking about the source of almost all inhabitation – water – and how European settlement here began one of the great journeys in Australian cultural complexities.

One of the first things they noticed about Alice Springs was the fences, their number and variety. They’d cycled from Santa Teresa, came through the Gap, entered the roundabout and turned into Gap Road to take them to the centre of town.

They’re especially attuned to the things that people build, being architecture students and having given themselves a year to take this in – in a section view of Australia along the 25th parallel. 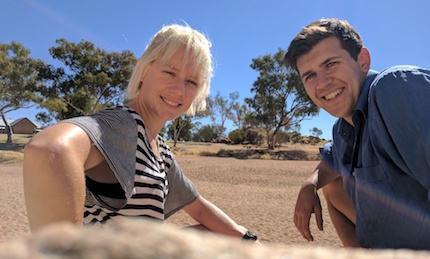 Their names are Bobbie Bayley and Owen Kelly. Bobbie is a graduate student on a travelling architecture scholarship and Owen is doing his Masters, both from the University of Newcastle, where architectural thinking is particularly turned to understanding place –  environment, climate, ecology, knowing how to respond to that with architecture.

Many in their position, given a chance to travel, turn their sights to what is happening internationally in the architectural world. It used to be called the Grand Tour, but Bobbie and Owen have dubbed their expedition The Grand Section,  focussed on what Australians are making of their own place, how they’re responding to it, in all its variety, through the built form, from the humble (or not so humble) fence to dwellings and public buildings.

They chose to cycle to slow down their experience: it gives them time to feel what is happening all around them, to observe and learn and think. It’s also a great way to start conversations, when they arrive at their way stops. 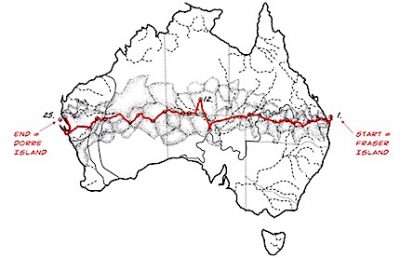 They chose the 25th parallel because it passes through Uluru, the heartland of the country, and set out from Fraser Island off the east cost in February, travelling by bicycle (except for the sea crossing of course). Their eventual destination is Dorre Island, off the west coast, a distance of some 6900 kilometres.

What stands as human habitation today rests upon what has gone before, so their journey is also through time, including pre-colonial Australia. One of their most  interesting experiences to date has been taking part over a couple of days in an archeological dig on Mithaka country, near Birdsville, where human-made stone circles may be evidence of village-living. This “could change the way we think about central Australian habitation”, say Bobbie and Owen.

They think contemporary Australian architecture has a lot to learn from what we already know about traditional Indigenous architecture, with its finely tuned responses to prevailing seasonal conditions. (Through their research they’ve learned that as many as eight different types of shelter could be constructed in the course of the year.) 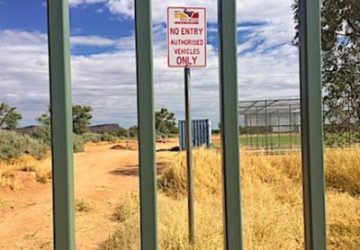 Alice Springs is their 11th stop along the way, the northern-most and by far the biggest in terms of population. At each of the stops they’ve spent at least a week, considering questions like: What have the locals made of their place? How has the place influenced the way they live and the way they’ve built their town, their homes? What are they using? Why are they there? And what things could make a difference?

Left: An Alice fence recently in the news, shutting off access to CDU’s oval.

The answers to this last might not necessarily lie in a building project. For instance, on Alice’s fences, they ask me – turning the tables on the interviewer – what do I think would happen if the fences were removed?

We talk about the anxiety many people feel about break-ins, about their need to feel secure in their homes. We talk about the roller doors that come down after 5pm on the shopfronts in the mall, another kind of fence, proliferating for the same reason.

But I tell them about a couple I know who choose not to live behind a fence. They’ve set up their main living area in their front yard, separated from the street only by a low chain-mesh fence. The yard gets northern sun in winter but is nicely shaded in summer.  It’s where they spend a lot of their family time with their young children. Their street is a something of a thoroughfare for people on foot so little by little they’re getting to know the passers-by. They are finding their sense of security through a growing familiarity with their neighbours.

And it can go the other way too. The family’s presence in their front yard can offer some security to people on the street. Recently a group of women from out of town, who were feeling threatened by some men nearby, came and waited there, in conversation with the couple, until a taxi arrived.

Above: A grand statement of a fence, on the Stuart Highway along a section of the railway corridor, designed by Susan Dugdale & Associates.

I tell them too about a local landlord who resisted the roller door solution after his tenants were broken into. Instead he put the time and resources into building a grille for the shopfront, a thing of beauty that boosts security but also enhances the whole look and feel of the street.

They like hearing these stories but they are just as interested to talk to people who have built fences, whether they’re masonry walls or corrugated iron, whether they’re high or low, plain or decorative, whether they allow passers-by to see in or screen them out completely. Many people here have clearly thought about their fences, which is unusual, they say. And theirs is an open inquiry into how Australians are inhabiting their places, it’s about understanding, not judging. 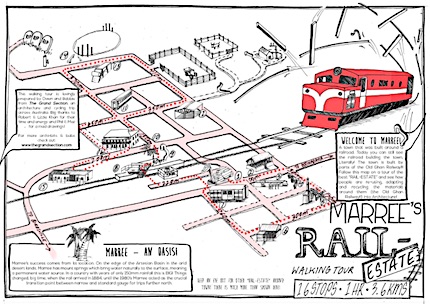 It’s also about giving something back. At the end of each week’s stay in a place they’ve found some way to present their observations and suggestions to whoever in the community may be interested. In Marree, for example, they developed a two-page guide for a walking tour through the township that highlights the way the town has been built from the railway for which it was once the railhead: rail irons are used for fences, verandah columns and chimney braces, whole sheds are made from ‘borrowed’ sleepers and dog spikes, old carriages are used for dwellings.

In Windorah on Cooper Creek – population 75-80 – they discovered the only town along their route thus far that welcomed flooding. It’s with flooding that the land flourishes and the town is situated out of the flood zone. Clever! (It might have solved a few problems for Alice if early settlers here had made such a decision.)

Coping with heat and dust are the big challenges for Windorah and they were interested to find one surviving pisé house, a rammed earth method of construction that was once prolific in the area, delivering a much cooler interior than today’s lightweight buildings that are dependent on air-conditioning.

Bobbie and Owen’s contribution at the end of their stay there was to reinvigorate interest in this simple construction method, drawing up a six-step guide. The local police officer was keen to have a go.

Above: Tiny Windorah (circled) situated above flood level: “One of the first examples we have seen of a town being sited with a genuine consideration of place,” write Bobbie and Owen in their blog.

Both these townships are tiny, although Marree’s population and economy are boosted by significant numbers of tourists. Bobbie and Owen recognise, coming into Alice Springs, the far greater complexity of the community.

They know they can’t hope to grasp all of the dynamics that influence the way the place is being inhabited but sometimes the impressions of a thoughtful outside perspective can be useful. They have observed, for example, that Alice’s public spaces – the river, parks, lawns, mall – are far more inhabited than the public spaces of any of the centres they’ve visited (Roma, Queensland probably the most comparable) and even Newcastle.

Well-used public spaces are generally seen as a positive in thinking about urban design and this is their response, but they can also see that overwhelmingly it is Aboriginal people using the public spaces and mostly not other people. Why? they ask, and what role is infrastructure playing in it or could it play? 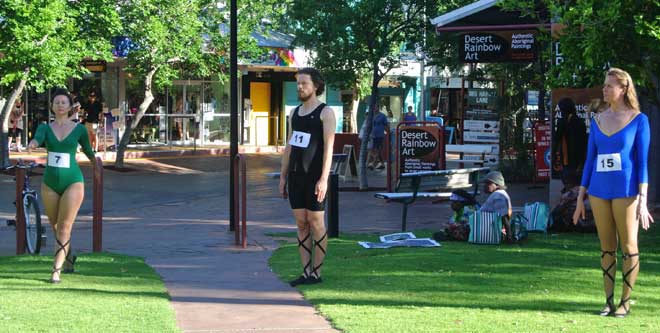 Above: ‘Art attack’ in a near-deserted Todd Mall by the EXTRA-ordinary Agency, from left Melissa Kerl, Doug Souter, Franca Barraclough, 2013; behind them, Aboriginal artists selling paintings.

Are there other areas, pathways, suburbs that are used by particular people for particular purposes and why? Was it always the case and if not, what changes brought this about?

How does tourism influence the way Alice Springs is inhabited?

Do people feeling optimistic or pessimistic about the town?

And noting the frequency of the story of people coming for a few days and staying, is Alice addictive? they ask.

By the end of this week, they’ll probably have a lot more questions but maybe also some answers and reflections. Keep your eye out for the presentation from this energetic, keenly interested and thoughtful duo before they head west.