Home Issue 6 Aboriginal flag on Anzac Hill? Give the right to others as well.
Issue 6Volume 24

Aboriginal flag on Anzac Hill? Give the right to others as well.

Alice Springs town councillor Steve Brown is combining his announcement to stand again in next month’s local government election with a call to allow the flying of the Aboriginal flag on Anzac Hill on special days, so long as other ethnic groups are given the same right.

“The Irish should have the right on St Pats Day the French on Bastille Day and so on,” he says.

Mr Brown says: “There is a belief amongst some that the Aboriginal Flag represents a nation. It does not.

“There never was an Aboriginal nation rather quite literally hundreds of small ones. 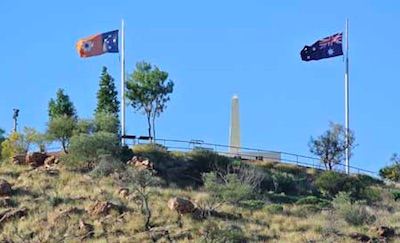 “Many of these don’t recognise what we know as the Aboriginal flag which in fact represents people by race not as a nation,” says Cr Brown who is currently on special leave to obtain medical treatment.

“Would that not then suggest that in a place where we seek to be equal if we fly a flag for one race? Wouldn’t it then mean we must fly a flag for all the other ethnic backgrounds who make up our nation?

“In my view such an occurrence would represent a dangerous disintegration of the Australian Nation.

“I have no issue with the flying of the Aboriginal flag anywhere else and possibly even next to the Australian flag on Anzac Hill on days that may be seen as being particularly signifigant to Aboriginal people such as Harmony day” with people from other nations getting the same privilege.