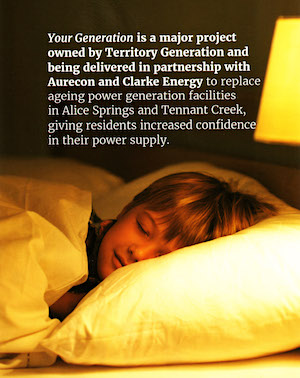 The clash between Territory Generation (TGen) and the Electrical Trades Union (ETU) over the phasing in of the new Owen Springs power station in Alice Springs is continuing.

The disagreements range from the schedule for shutting down of the Ron Goodin power station, adjacent to the Golf Course Estate, to operations control being centralised in Darwin, communications issues and the introduction of battery storage.

The discussion started with a salvo from the ETU, a response from TGen and a fresh rebuttal today from the ETU.

Meanwhile, TGen says “it would be a natural future consideration for us to include an additional solar array [at the Owen Springs power station in the Brewer industrial estate about 25 km south of the town centre].

The NT Government owned TGen was responding to a question from the Alice Springs News Online about reports that TGen was considering a 5MW solar plant similar to the privately-owned Uterne array which is providing about 15% of the town’s demand.

“At this stage, we are focussed on commissioning our new engines and installing the new battery storage by the end of 2017,” says the company.

Dave “Strawbs” Hayes, the NT Organiser of the ETU, roundly rejects claims TGen CEO Tim Duignan made in the News responding to earlier statements from the union. 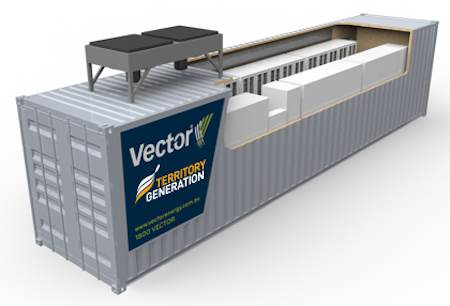 There are concerns about the BESS’s ability to provide system inertia in the event of system and generation faults.

Mr Hayes says before Ron Goodin, which can act as a back-up, is taken off line, the new BESS technology needs to be proven to be reliable.

He had made the point that there are only two transmissions lines from Owen Springs, 27 km south of the the town centre, a far greater distance than Ron Goodin: When one line is shut down to undergo the required periodic maintenance, the power supply to Alice Springs hangs by a tread.

HAYES: We believe TGen have a legal obligation to have the ability to black start the system after a system black event. That is to energise all the wires and substations.

DUIGNAN: Some issue raised by Mr Hayes do not sit within the control of TGen and are in fact broader Power Water Corporation (PWC) network issues.

The Alice Springs News Online is now seeking comment on that point from PWC which owns the wires.

HAYES: Regardless of whose responsibility it is, if a solution is not found, Alice Springs could be left in the dark if there is no way to get power into town after Ron Goodin has been decommissioned. We believe there needs to be either a third line constructed or Ron Goodin to be kept available for operation until a third line can be built.

DUIGNAN: The continued use of the Ron Goodin power station’s ageing equipment in a built-up suburban area would be increasingly difficult to maintain reliability, not to mention increased emissions and costs to produce.

HAYES: Mr Duignan’s broad statement about Ron Goodin being difficult to maintain is not true. Maintenance personnel are trained in the equipment there and the location does not influence maintenance activities.

DUIGNAN: Decommissioning of Ron Goodin will not start until the new systems at Owen Springs are proven.

HAYES: TGen are still sticking to the originally planned timelines of starting decommissioning from July 1, 2018. All new power stations have teething issues. Why would they decommission a running power station during a winter high peak load time? This may leave Alice Springs vulnerable during a period of high demand. There is no mention of best industry practices which recommend leaving plant available for two summer and two winter peak load periods.

Remote control of the system – in Darwin – remains a sticking point.

DUIGNAN: Owen Springs has been remotely controlled since its commissioning in 2009.

HAYES: Yes, from Ron Goodin, but that is due to be shut down. There will an entirely different communications method and additional currently unproven or tested control systems operating the generation system.

There is no agreement by Mr Duignan and Mr Hayes on the level of night staffing at Owen Springs and the Remote Operating Centre (ROC) in Darwin.

Mr Hayes says one staff at either end is not enough. The ROC will be monitoring 53 units in six different locations.

Mr Duignan says staffing “will ensure that we deliver our main aim to provide efficient and reliable power supply to all Territorians”.

Mr Hayes says the onsite personnel will not have had the ability to locally operate the system regularly as the ROC will be doing that. Therefore their skills will not be maintained at a level as high as the current personnel’s.

Mr Duignan counters other jurisdictions have been remotely controlling power stations for over 30 years, safely, reliably and efficiently.

Mr Hayes argues those sites may be connected to the national grid where unit or station failure does not interrupt power supply.

HAYES: A stand-by engine at Ron Goodin, “can be started and brought up to full load – best scenario – in two minutes”.

DUIGNAN: It is not practical to restore power in a safe manner in 120 seconds. Our people are trained to only restore generation only if it is safe to do so and this assessment process in itself can take longer than this time period. Once generation is available the restoration of power to the customer is managed by the Power Water Corporation which owns the wires.

HAYES: If a fault is known and obvious to the onsite personnel, two minutes is all that is required to start, synchronise and load generation plant at Ron Goodin, ready for the restoration process to begin. That is why there is additional outage time to ensure system stability during the restoration process.

The introduction of the ROC just adds a layer in between the system operator and onsite personnel that may cause communication issues.

Is the ROC building cyclone proof?

DUIGNAN: To suggest that any modern building in Darwin is only constructed to a category two cyclone appears to be an erroneous statement without any basis.

HAYES: The ROC sits in a normal office building in Berrimah with no additional cyclone protection and plate glass windows on one wall. We believe there is a fair amount of work to be done with emergency planning and communication, we will ensure that the necessary people are consulted with.

DUIGNAN: TGen has actively engaged with its employees on future operating models since August 2016, having raised some of these models in late 2014.

HAYES: Many concerns have been raised by staff about TGen’s engagement and consultation as in many areas they have seemed to just steamroll ahead with their plans and ignore employees and their representatives concerns.

TGen have been more interested in employing interstate consultants than listening to the experience of their long term employees.

DUIGNAN: We will continue to work with the ETU and our employees on the Ron Goodin decommissioning process and remain confident that we will reach agreed outcomes for all of our employees.

HAYES: The ETU is a partner in the generation industry Australia wide and we recognise the changes involved with the technological advance in this sector. That said we will do everything in our power to ensure the safest and most reliable systems are maintained as change is introduced.

If that takes a bit more time and costs a few more dollars so be it, the general public should not be disadvantaged in anyway due to boardroom decisions. A reliable power supply is not a privilege in this day and age. It is a right.

Acting TGen CEO Andrew Kneebone provided the following statement this morning, after we had provided him with a draft of this report:–

There are two parts to your email – firstly, in regard to the latest series of questions re past domestic solar generation programs, rebates and what the future is in that regard; these are all matters for the NT Government / Power Water Corporation and Jacana to address, as TGen do not set or manage any policy in this area.

Secondly, in regard to the other wide-ranging components of the story and comments from the ETU, we feel we have made our position on the issues raised very clear and at this stage don’t believe there needs to be any further clarification.

Our job is to ensure the safe and reliable supply of power to the people of Alice Springs and we will continue to work with all stakeholders to ensure this occurs.

A spokeswoman for the Power and Water Corporation (PWC) provided the following statement about how it “will manage the vulnerability of the transmission lines when maintenance is required and reliance is on one line”.

PWC is responsible for the planning, building, operating and maintaining of reliable electricity networks to transmit electricity between generators and consumers.

PWC is responsible for the network security, reliability and quality of supply to all network users.

The technical requirements to achieve this are based on approved rules, criteria and limits included in the Technical Code and Network Planning Criteria.

Power and Water works closely with Territory Generation to effectively manage the load distribution and mitigate any risks to the power system and distribution network and strives to deliver a safe, secure, reliable, high quality electricity supply at all times.

Council: instability at the top

By KIERAN FINNANE After just six months in the job, the Town Council's Director of Community Development, Kim Sutton, has resigned. The resignation appears to be...
Read more
Issue 7