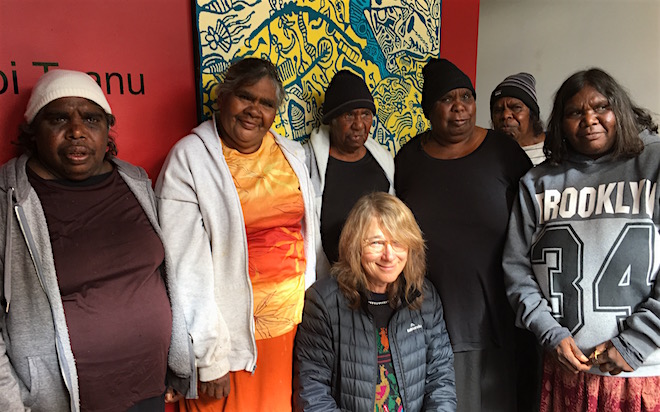 At a time when the birth of the Western Desert art movement at Papunya is being celebrated with a major exhibition, Tjungungutja, at the Museum and Art Gallery of the Northern Territory in Darwin, Alice Springs has a chance to see fine new work from the revival of the movement in that community over the last decade.

Following the Pintupi exodus from Papunya in 1981, the original artists’ company created there, Papunya Tula Artists, gradually withdrew as it flourished further west in the communities of Kintore and Kiwirrkurra. And even as new art centres were established in surrounding communities, confoundingly Papunya itself remained without one. 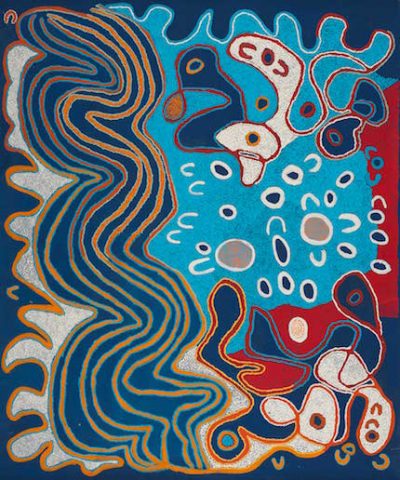 Warumpi Arts, created by the Papunya Community Council in 1994, was focussed on retail, with a shopfront gallery in Alice Springs; there was no art centre in the community for the descendants of the brilliant first wave of Western Desert artists, nor to support the emergence of new talent.

The story of how this came to be and of the determined push from local artists to get an art centre of their own is told by art historian Vivien Johnson in her 2015 publication, Streets of Papunya: The re-invention of Papunya painting (New South Publishing).

Michael Nelson Jagamarra and Long Jack Phillipus were already famous and could continue their careers independently, but they were acutely aware of the need to support others – “those old ladies and young people”. They enlisted Johnson’s support in late 2005, but as she was soon to discover the Australian Government was no longer funding new art centres.

What followed may be unique in the history of art centres for the involvement of Johnson and her university. A partnership was formed between UNSW’s College of Fine Art (COFA) and the artists. Sammy Butcher, legendary Warumpi Band guitarist and senior man at Papunya, conferred on the project its name, Papunya Tjupi  – so-called for the Honey Ant hills, like its predecessors (Tula and Warumpi being alternative names). By October 2006 it was a legal entity but establishing a good painting space for the artists would take longer.

Critical was the painters’ work for their inaugural show at the Ivan Dougherty Gallery in Sydney in 2007, an opportunity which came about through the support of COFA. Their expectation was to raise about $26,000 from the show; in the end they took more than $100,000, with the gallery foregoing commission. The artists turned over 40% to the new art centre. 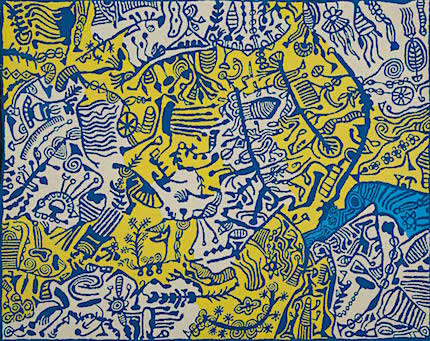 Also vital was a printmaking workshop for the artists, preceding the show, hosted by COFA’s Cicada Press. It boosted the number of works available for sale, but more importantly, it provided a developmental experience for the artists, helping them to explore new mark-making to break away from a generic painting style into which they had settled. It also introduced them to two young Sydney artists, Kasumi Ejiri and Simon Taylor,  who would become future managers at the art centre.

Johnson traces the impact of the pair’s artistic development strategies, which included distributing 10 small canvasses to each artist, asking them to paint something different on each one, and encouraging black-and-white work to better focus on drawing and story.

After a number of moves and complications, Papunya Tjupi was finally given for its premises the old Papunya garage, which for its scale, and after major refurbishment, has become one of the best, if not the best painting space in the desert.

Cut to today and the present exhibition, Tjupi Taanu, at RAFT Artspace. Eight artists are represented, all women and each working in their own quite distinct way, with varying palettes and styles and a high degree of command in large scale canvasses. In just a decade they have fulfilled their inaugural chairperson Michael Nelson’s vision of painting “same stories, different way”. 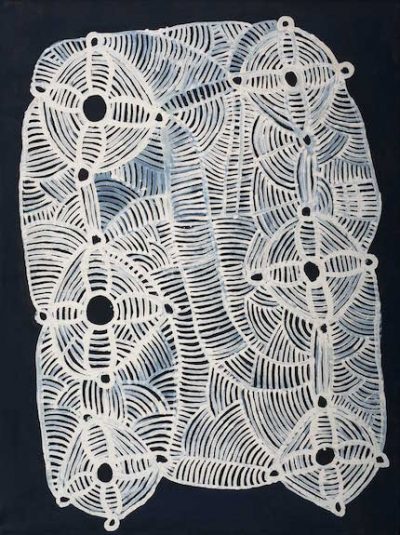 The artists include the region’s most senior law woman, Tilau Nangala, with two canvasses well demonstrating her move away from a formulaic representation of her Mikantji story to a wonderful freedom of line and warmth of colour (see above right), as well as a spaciousness taken further than in the works illustrated in Johnson’s book. The paintings also show her working confidently at a scale she has never worked at before – “phenomenal” is Johnson’s word for it.

Like most of the artists, Beyula Puntungka Napanangka paints only one story, having settled on it after exploring the range of possibilities. This is the Kalipinypa Tjukurrpa or Honey Grevillea Dreaming, of which there are two representations in the current show. They differ in scale and palette but the artist knowingly uses in both areas of colour to hold to the canvas her dynamically intricate drawing of the flower and its qualities.

Apart from Martha MacDonald (not in this show), Doris Bush Nungarrayi is probably the best known of the artists, with three works included. The moving story of her involvement with Papunya Tjupi, after losing her beloved husband, is described by Johnson as a redemption and “a textbook case of why a good community art centre is so much more than a business”.

In last year’s Desert Mob her works in charcoal on paper stood out for their elegant containment and clarity. Her large painting in the current show explores the same story, Papa Tjukurrpa or Puppy Dog Dreaming, as if in an expanded version, accumulating its many elements. The two smaller works seem to do the reverse, as simpler versions of the Tjurrpinyi story (above right), an idyllic love story from her past that featured in her 2012 solo show in Sydney, the first for any Papunya Tjupi artist.

In a show full of individual invention, perhaps the most striking is Candy Nelson Nakamarra’s Kalipinypa (below) for the lacy transparency of its story elements over a loose meshing in watery blue lines.  Johnson describes her strategy as “an ingenious reversal of the classic Papunya sequence of background, design, infilling”. Here it is as if another painting “peeps through”.

This is the first group show for Papunya Tjupi in Alice Springs, after its art scene had pretty much “written off” Papunya, according to Johnson.  Far from simply trading off the art historical prestige of their community, the artists are reinvigorating with verve its proud tradition. 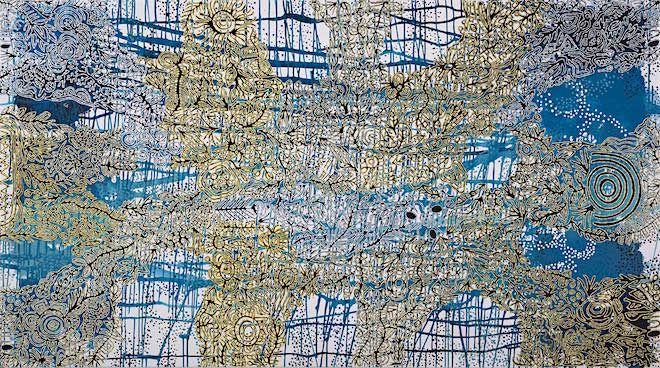