Above: Tjupi Band from Papunya, singing in Luritja,  showed why they’re one of the desert’s most popular.

“Quite often people say we are silent in the community. NAIDOC is a great way of just gently showing people we are not silent and we are not to be taken for granted, we are here and really positive and happy to work towards a bright future for everyone.” 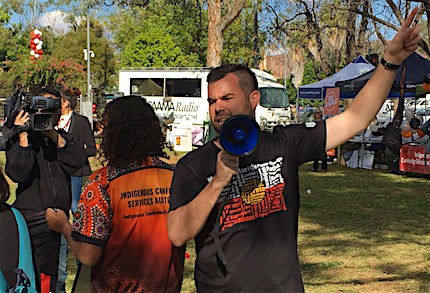 An upbeat Chansey Paech (left), MLA for Namatjira and a local Aboriginal man, had led the hundreds-strong NAIDOC march, down the mall from Anzac Oval to the council lawns and there was certainly nothing silent about it.
“What are we?” he’d cried out over a loud-hailer, again and again, competing with the strong beats of  Drum Atweme. “Come on you mob, let me hear it!”

“Strong, black and deadly!” came the answer. “Proud of our languages, proud of our culture.”

At the last minute Amelia Turner Kngwarreye stood in for Kumalie Riley to do the Welcome to Country at this “big week for all us Indigenous mob right around Australia”.  (Mrs Riley was busy in the wings, with a group of young women preparing to dance.)

As Mrs Turner had also stood in last night to do the Welcome at the civic reception in honour of the Governor-General, Sir Peter Cosgrove, he presented her with a Governor-General’s medallion for “civic mindedness above and beyond the call of duty”. She was certainly chuffed. 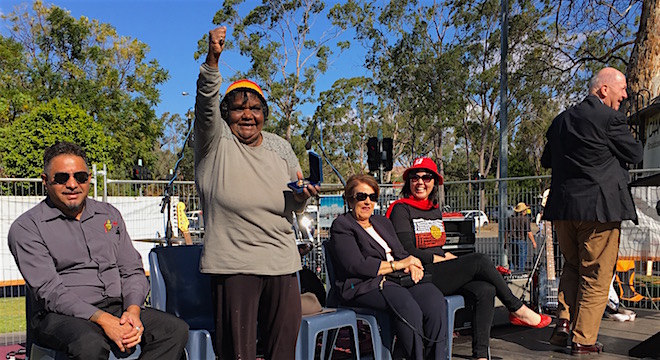 The Governor-General went on to give the opening address, about the day “for all Australians to celebrate what it is and what it means to be an Indigenous Australian”.

He spoke to the national NAIDOC theme “Our languages matter”, recognising that Indigenous languages express “connection to land, to history, to the sky and the law”, and are “an eternal bond to loved ones, to family and ancestors and country”. 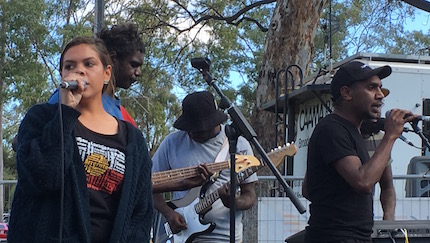 “Language is life,” he said, “the very essence of spirit and soul. By keeping languages alive, passing them along, Indigenous Australians are passing culture and identity to the future.”

Left:Singer Crystal Butcher had a guest spot with Tjupi Band.

He said the achievements of of Indigenous Australians are “felt across this nation”:  “Indigenous advancement and culture … makes us and completes us and are what we celebrate today.”

His speech set the stage nicely for Harold Furber to make what he described as a “last minute announcement”, in his capacity as chair of a group “leading a push for the national Indigenous art and cultural centre here in Alice Springs”.

He said the group has been working for 10 years, and has received a lot of support, including “now from the Northern Territory Government”, which has provided funding for a project officer “to start organising the consultations for the entire project”. 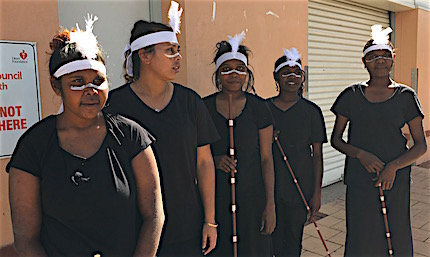 At this stage, he said, the project is worth about $70m (the amount promised by the NT Government) and it “should have a long term effect on the development of this town”.

To date, the government has spoken of two separate projects, one described as the “Iconic National Indigenous Art Gallery” and the other as “Nganampa Anwernekenhe”, the former being led by a government-appointed committee, co-chaired by Hetti Perkins and Philip Watkins, the latter, led by Mr Furber’s group (the Nganampa Development Corporation).

Does Mr Furber’s announcement today mean that his committee will start working with the Perkins-Watkins committee?

“Our group has long term been working on a national art and culture centre. The Territory Government has gone sideways and set up another committee.

“A 10-year-old kid could tell you the two projects should work together, in parallel or combined.” 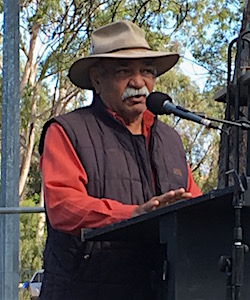 Mr Furber (left) said his group expects to sit down with the government-appointed committee; in fact, they have already, at that committee’s first meeting: “We advised them of what we were doing, that we were surprised this was set up.

“We advised them that this is an Aboriginal initiative. You can’t separate art from culture. We’re pursuing that line, continuing the international and national consultations we have undertaken over the last 10 years.

“Let’s work together for the benefit of this town, let’s build an international-standard centre for this town.”

Referring to the discussion about the project on last Monday’s Q&A and the impact that Hobart’s Museum of Old and New Art (MONA) has had on the whole Tasmanian economy , he said “we can develop the MONA effect” and “no-one needs to worry about the art they are selling, it will increase”.

As Chansey Paech is the Assistant Minister on the Iconic National Indigenous Art Gallery, the News asked him to comment on Mr Furber’s announcement.

Mr Paech said there is “definitely a lot of merit” in the two committees having a good conversation about whether the projects are “co-located or merged”.

Below: Queuing for the Jumping Castle. 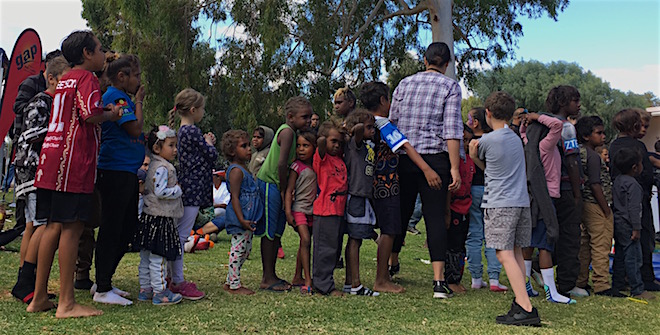