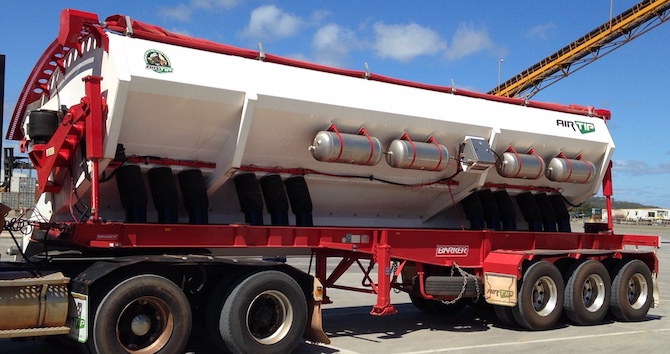 All ideas with a big touch of genius are no-brainers: The Air Tip trailers developed by Clarke Petrick (pictured) in Alice Springs are a perfect example.

The conventional system means the prime mover needs to have a hydraulic pump installed that is expensive, around $20,000, including tanks, which in turn reduce the amount of diesel that can be carried. There is also an extra weight of 400 kg and ongoing maintenance costs. 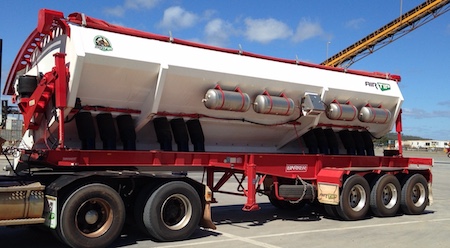 Mr Petrick’s invention uses the compressed air system that is part of every prime mover, to operate the brakes of the road train.

The idea occurred to him when he and his father, Grant, were bogged near Old Andado, some 250 kms from Alice Springs, the nearest source of help.

While Mr Petrick senior was asleep, waiting for anyone coming past to tow them out or relay a message, Mr Petrick junior used the pneumatic bags of the truck suspension, pumping them up one wheel at the time, and putting the camel crates from the trailers under the wheels for traction.

“It was easy,” says Mr Petrick. “I could do it all pretty well at the flick of a switch.” 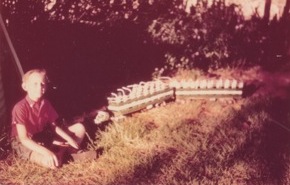 In a way he has transport ingenuity in his blood: Growing up on his grandparents’ cattle station Neutral Junction, his father had a dream at age eight of having a road train: He built a model (he is pictured with it), and today he is transporting thousands of cattle a year out of Central Australia.

Mr Petrick junior says nine $120,000 Air Tip trailers have been built so far, first in Murray Bridge, and later in Toowoomba, but there are plans to build them in Alice Springs, and also licence them in the USA.

The business has hit a snag with the downturn of the iron ore mining in WA, a major customer, but this is likely to be temporary. Two of the trailers are in use in Alice Springs, owned by Probuild.

PHOTOS: Developed in Alice – the airbag assembly to open and close the cover (above) and under the bin, lifting it up (top). The air tanks are filled as the road train travels, using the same standard system that operates the brakes.