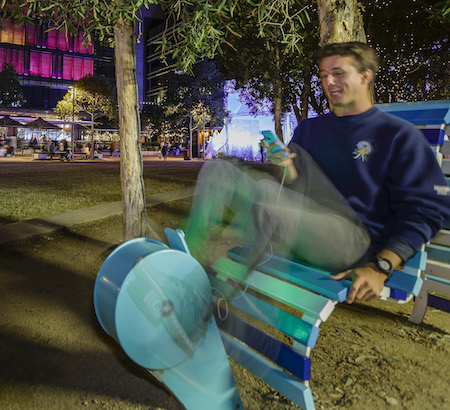 The contribution of Councillor Jacinta Price to last night’s town council debate about juvenile delinquents harks back to Alfred Traeger in Hermannsburg 90 years ago, and his pedal radio (below).

While her fellow councillors debated cutting off electricity to Anzac Oval power points to remove an attraction for young vandals gathering there, Cr Price wants to instal a pedal powered mobile phone charger she’d seen at Darling Harbour in Sydney (at right).

The contraption would use up the energy of the kids roaming the night, she told the meeting: “Hopefully that will wear them out.”

The rest of the debate was less humorous, climaxing in the statement by Corporate and Community Services director Skye Price about running the Night Patrol Service – a bus taking kids home or to a safe place: “I don’t know that this service is actual core business for Alice Springs Town Council but I don’t know which service provider would be best equipped to deliver the service long term.”

The meeting could have asked Families Minister Dale Wakefield, who was sitting in the public gallery, but she was not invited to join the discussion.

There is an official from Ms Wakfield’s department in the management group which includes the $40m a year NGO, the Central Australian Aboriginal Congress, as the operating partner of the town council.

Are Congress attending every night, Ms Price was asked.

“Unfortunately not,” was her reply. “Sometimes we have some absenteeism.”

She offered to provide accurate data about “attendance of staff”. Mayor Damien Ryan asked for it and wondered whether “we are running half a service”.

Ms Price commented that the NT Government is “looking closely at this service and we believe will be seeking expressions of interest later this year.”

Committee chairperson Jade Kudrenko said any absence of Congress workers is “concerning”. They are meant to provide social work and psychological support and if there is an “ongoing challenge” this needs to be taken into account when selecting a partner in the operation.

“The issue of staff attendance has not been raised, and our staff records do not reflect attendance issues.

“Congress is committed to maintain our partnership and provide an accessible transport and therapeutic service for young people in the CBD at night.

“This collaborative service is a vital part of the after hours plan for youth in our town and since inception in 2015 has provided more than 20,000 episodes of transport and additional care, support and referrals for young people and their families.”

Cr Brendan Heenan quoted from Ms Price’s report that street kids are “getting younger and younger”: Are there any statistics of kids going out again after being dropped home? Is there feed-back from the police? Should the service go till 2am instead of just 10:30pm or 11pm? 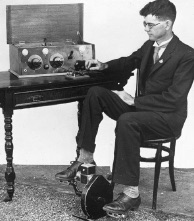 Ms Price said there are details the service is not able to include in council papers “in the interest of privacy for the young people” because they are at risk or involved in anti-social behaviour, and referred to agencies to assist them.

She wasn’t sure whether the WiFi had been switched off at Anzac Oval. Events such as AFL football fixtures usually create spikes.

Cr Melky said: “We still have anti-social behaviour, children out at night. We have a major issue and it cannot just be resolved with a bus service. This is actually smack bang in the middle of our core business.

Ms Price said she had “only anecdotal feedback in regards to Saturday nights in particular. There is still a need for the service in the latter part of the evening.”

Cr MELKY: Does the program have an objective? If so what is it? Are we achieving those targets?

Ms PRICE: There are no Key Performance Indicators, actual figures, but an additional knock-on effect is minimising anti social behaviour.

Cr MELKY: Is that actually happening? He works late in his CBD office and “there is a lot of damage to cars in the carparks … broken glass everywhere. Is the service contributing in a positive sense?”

“The council worked hard for this service,” she said.

“There were nights when we left this chamber and there were 50 plus young people on the lawns that we had to wade our way through … unsupervised people at 12 o’clock at night.

“Elected members in this chamber were asking for a youth curfew and we decided to find a more pro-active way forward and be part of the process.”

She said the service had revealed the numbers of the kids: “Some of these weekends there are 126 people, 116 people in one evening”

Mayor Ryan told the meeting he had voiced to the organising group his “real concerns about issues that are happening within the CBD in this time of the year when it’s cold. I flagged what’s going to be happening when the summer comes along.

“We are spending an amazing amount of money fixing up damage on Anzac Oval,” he said, including fires and the vandalised fence which may need to be replaced.

Cr Price said she wanted to go to the fortnightly meetings of the service manager.

Ms Price (no relation) replied she did not have the “discretion to invite others”.