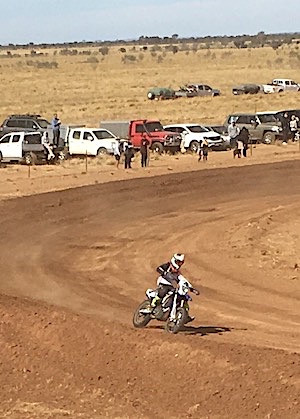 Two Alice Springs riders are on the Finke podium, Yamaha WR500F rider Daymon Stokie (at left) in first pace and Luke Hayes (KTM EXC500) in third, with Ivan Long from Murray Bridge in SA (Husqvarna FE450) in between them.

An all-Alice podium was foiled when David Walsh’s KTM broke down on this morning’s northbound leg.

The last local rider to win the bikes section was Ryan Branford in 2006 on a Honda CRF 450.

“He went to the gym, and worked out on a rowing machine so much he could have entered the rowing Olympics,” says Mr Ryan. “He is physically at his peak.” 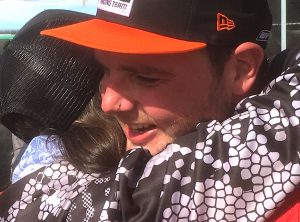 Walsh had a five minute lead into Finke yesterday, despite a doing the last 30 kilometres with a flat tyre, and has extensive previous Finke experience. Three years ago he broke his collarbone.

His DNF was caused by a mechanical failure which occurred just 10 kilometres into the north-bound race this morning.

Daymon Stokie, 26, was riding with broken bones in his left hand, suffered during the Gascoyne Dash in WA in April.

Stokie last year raced in the Baja 1000 in Mexico’s Baja California Peninsula. Initially a member of a four-rider B-team for Honda he was moved into the A-team when a rider dropped out. Stokie’s team won the race. 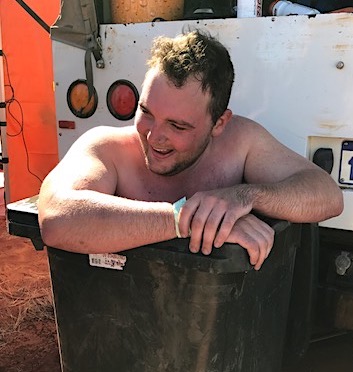 Luke Hayes, at 22 one of the youngest of the top riders, hails from Deep Well  cattle station south of Alice Springs. He ran 6th last year.

His father, Billy Hayes, in 1998 ran third – the last time three Alice riders were on the on the podium, a feat but for bad luck could have been repeated today.

PHOTO from Finke courtesy Damien Ryan: Luke Hayes takes an ice bath in Finke. Followed by a hot shower this is credited with settling muscles after a hard day.