Will Loop Road take Alice back to tourism top? 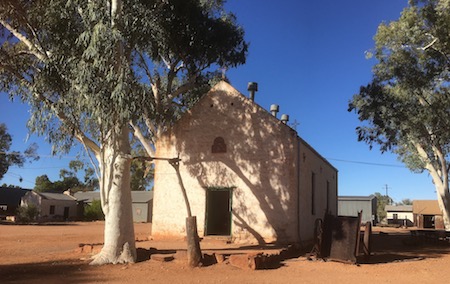 The opening of the all-bitumen Inner Mereenie Loop may put Alice Springs on the way to regain the tourism supremacy which it has allowed the Ayers Rock Resort to wrest from it.

The Giles Government initiated the spending of $25.5m to seal 43 kilometres of dirt road west of Hermannsburg, at long last closing the 380 km loop. It will be a game changer for the region and if the current government gets it right, it will be a major one.

The Gunner Government needs to pick up the ball and so far the signs are not good: The historic precinct (above right) in Hermannsburg, 140 years old today, is being scandalously neglected and the government is planning to build a caravan park, at a reported cost of $6.5m, against the express opposition from the local people who own an existing caravan park.

Most astonishingly the government has not sealed the mere six kilometers from the loop road to Gosse’s Bluff / Tnorala (at top, and below), limiting the track to 4WD, and shutting out anyone in a 2WD as well as anyone towing a caravan, the categories dominant in the vehicles we saw on the loop,  from one of the pearls in our tourism crown, and one of the reasons for completing the loop seal.

This is despite the fact that the road building machinery is still within 12 km of the site – last Thursday afternoon at the turn-off from  Larapinta Drive some 50 km west of Hermannsburg.

In glorious sunshine and very low traffic, we left urban life behind and followed the valley between the breathtaking rust-red ranges.

Going straight ahead instead of turning right to Glen Helen, some 40 km out of town, we were soon embraced by the wide open spaces of a grass and mulga tree plain. 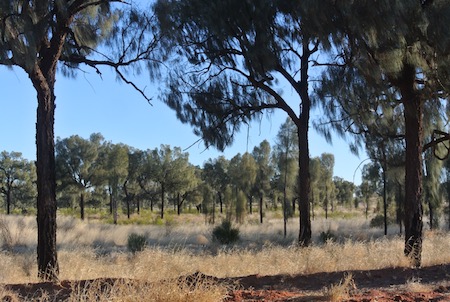 An hour and a bit after departure we reached Hermannsburg.

Another hundred and a bit clicks, traversing an enchanting woodland of desert oaks (right), we arrived at Gosse’s Bluff, a massive meteorite crater.

Protected by warm swags from the desert chill, we watched the rising sun striking the rim’s eastern flank. It took our breath away – only to have the joy repeated when we saw the morning breaking on Mount Sonder at the next stop, Glen Helen, the following day.

Glen Helen is on the banks of the Finke, the oldest river in the world, meandering its way through ranges slashed with red cliffs and delighting us with a play of moving shadows all day.

The government listened to local pressure not to seal the “outer loop” which would likely  have channelled more visitors to The Rock, via King’s Canyon, and away from Alice Springs.

The other big winner from this decision will be Hermannsburg – Ntaria by its Aranda name – but there are some potential hurdles. 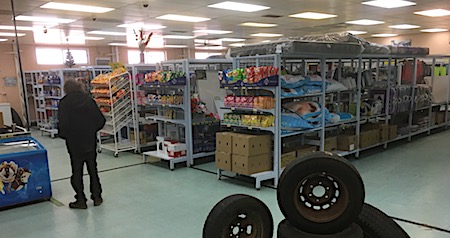 HACRT owns the Top Shop (at left), service station, fast food outlet, coffee shop, several rental homes and the caravan park with a capacity of 60 and doing very well for half the year (below, right).

Its demountable units are used by visiting tradies, there are powered sites and a very tidy ablution block. 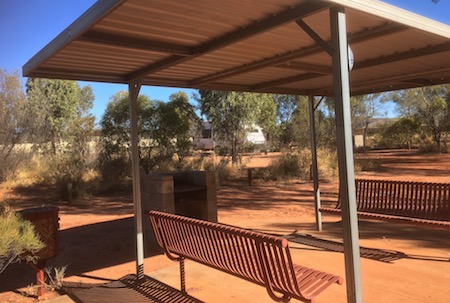 Booze is not allowed, something many visitors welcome, says HACRT manager David Thomson.

The other player is the Lutheran Finke River Mission which owns the second store and manages the fascinating historic precinct on behalf of the local Aranda owners. It is a monument to the region’s religious life – traditional and Lutheran, beneficially coexisting – and to the lively agricultural and small business activities initiated by the German missionaries.

These activities were  taken up by the locals a hundred years ago but are mostly no longer a reality. The notable exception is Indigenous arts, paintings and pottery, which have earned national recognition.

That this weekend’s anniversary is being marked by no more than a low-key function underscores the absurdity that Australia is allowing to deteriorate one of its milestones of white settlement: Yes, Hermannsburg is a nationally registered historic site, but for more than 10 years very little specialist restoration work has taken place. 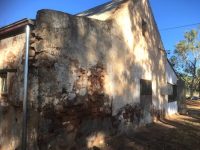 Many of the buildings are in a bad state.

The manger of the precinct, Rodney Matuschka, says there is now hope for government money to start flowing, including a $50,000 NT grant which he hopes will attract a three-fold  grant from Canberra.

AT LEFT: Precinct building in need of restoration: Someone had tried to fix it with concrete.

“We’re just hanging in there. From time to time the Finke River Mission has to support us.”

Asked whether  $2m would help  – the amount the NT Government is spending on a Sydney company zapping laser lights on the ranges in Alice Springs, for just one week – Mr Matuschka said: “That would allow us to professionally restore the entire precinct.”

But the NT Government has another idea, building a caravan park for reportedly $6.5m.

This seems to be proceeding in the way the current government prefers to do business: in secrecy, with a minimum of public awareness and using interstate ‘experts’.

The new caravan park would happen against the express wishes of HACRT.

They called a meeting which was attended by an official from Tourism NT. They did not bother to look at the existing caravan park, says Mr Thomson.

Their idea is apparently to put the park outside Hermannsburg, on the outskirts of the community.

“They said people don’t want to stay in Aboriginal communities. That’s the opposite of the truth,” says Mr Thomson.

He says he attended the meeting on Mr Williams’ instructions, told those present that HACRT don’t want a caravan park in opposition and left. HACRT had nothing further to contribute to the process.

Mr Thomson understands a report has now been written but HACRT has not been told what’s in it.

The government gave no reply to enquiries about the project from the Alice Springs News Online.

Mr Thomson says the existing park has adequate facilities, there is lots more land for expansion, and they have just completed a wildlife enclosure for injured or orphaned roos and thorny devils, for visitors to see.

A concert by Elvis tribute artist Jeff Hancox, playing with Warren H, was held some time ago. A further concert with another “national star” is being planned.

The caravan park is big enough, for example, to cater for 50 bicycle riders who recently did the Loop. 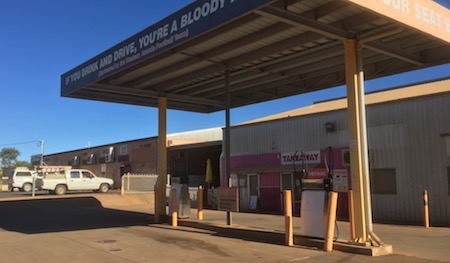 HACRT is clearly operated mostly by people from elsewhere. Mr Thomson’s wife, Dao, who helps run the spotlessly clean and well stocked store, has a masters degree in IT and is a former news anchor of a Thai TV station.

At the coffee shop her brother is a Sydney-trained barista with a four star rating and also has a masters in business marketing.

Mr Thomson, in town for three years, was formerly a probation and parole officer in Queensland. He does much of the residential maintenance work himself and has fabricated the park furniture.

He is reluctant to comment on any Indigenous workforce issues  in the HACRT businesses but no Aboriginal employees were in evidence either there or at the heritage precinct during our five hour visit last Thursday.

This raises questions of priorities.

Will the big new caravan park proposed by the NT Government be a FiFo operation, given the population’s apparent attitudes towards employment?

Shouldn’t the tourism industry develop its own momentum, in harmony with the community?

Shouldn’t the historic precinct be brought up to scratch first to attract tourists?

Right: The crack between the cool room rear wall and the rest of the building. For more than a decade the NT and Commonwealth governments have allowed the precinct to deteriorate.

There is a camping ground at the magnificent Palm Valley, just up the road. How will this destination be integrated with the experience of the Loop?

The current ‘look but don’t touch’ mode will also need to be replaced by a more user-friendly approach.


Thousands of locals know how to enjoy the bush, knowledge that can be passed on to visitors now captive in tour busses or bullied to abstain from activities that would hugely enhance their holiday: How do you light a small cooking fire? Which way do you point your swag on a windy night? How do you go to the toilet? (Hints: Go down-wind, find a bush, take a small spade, bring a sealable plastic bag to take the used toilet paper home with you.)

The new road has large swathes of land cleared alongside it. No doubt some will be reclaimed by nature. Some though could be maintained for generous rest stops with shade, trees, a water tank, toilets and seating made from something more appealing than concrete. Short walks could be developed from these rest stops into the landscape, for instance through the desert oak woodlands.

That will cost ongoing money but it will be part of the value adding that will make our bush roads an extended joy rather than a mere “scenic drive”.

ABOVE: The first rays of the sun strike Mount Sonder. 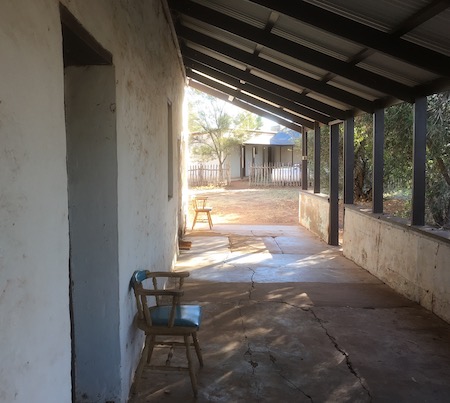 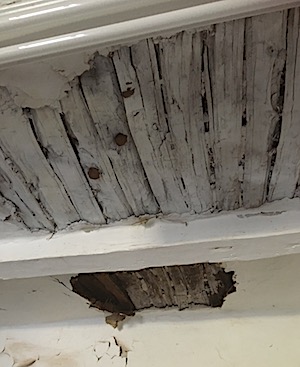 ABOVE: The verandah of the oldest residential building, dating back to the 1880s, and one of the several holes in the ceiling. The precinct has national heritage listing. 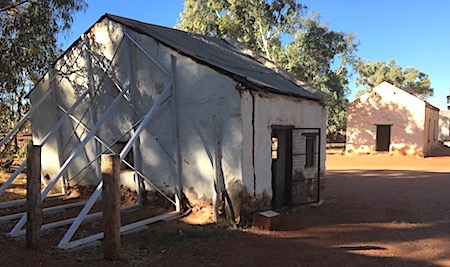 ABOVE: Steel bracings had to be installed to stop the back wall of the historic cool room from toppling over. 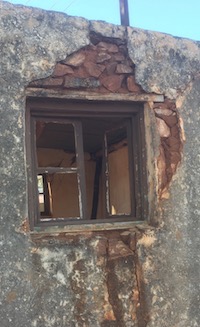 The precinct’s mortuary (above) and school (below) needing some TLC. 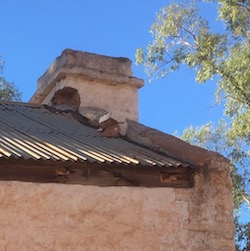 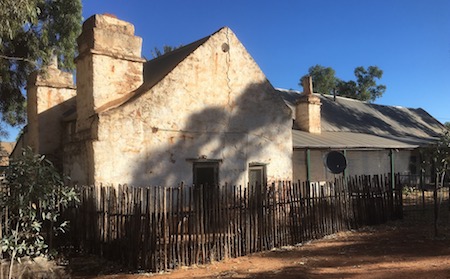 ABOVE: The oldest residential building in the precinct. 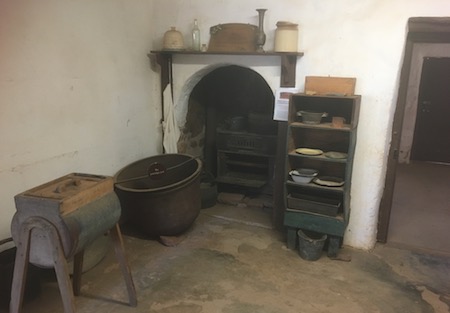 ABOVE: A corner of the kitchen in that building.

ABOVE: Three grey nomad couples from NSW at Tyler’s Pass with Gosse’s Bluff in the background. They had planned an out-and-return trip from Alice to Glen Helen but when they heard of the new road they decided to do the Loop. When they got to Hermannsburg they told precinct staff of their disappointment not to have been able to access Gosse’s Bluff with their rigs: just six kilometres away but designated 4WD, with a short stretch of gravel road soon turning to soft red sand. 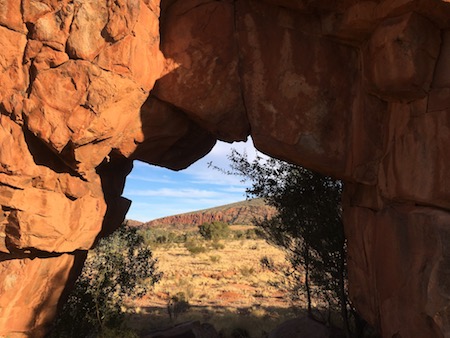 ABOVE: The Larapinta Trail from Glen Helen to the base of Mt Sonder leads through this opening in a wall of stone

ABOVE: Glen Helen Lodge, destined to become a way point, not an end point in the West MacDonnells.

ABOVE: No entry, no photos signs at the edge of a residential area in Hermannsburg.

ABOVE: Surely, that sign could have been put somewhere else, instead of in front of the Albert Namatjira monument.