A long lunch for a good cause 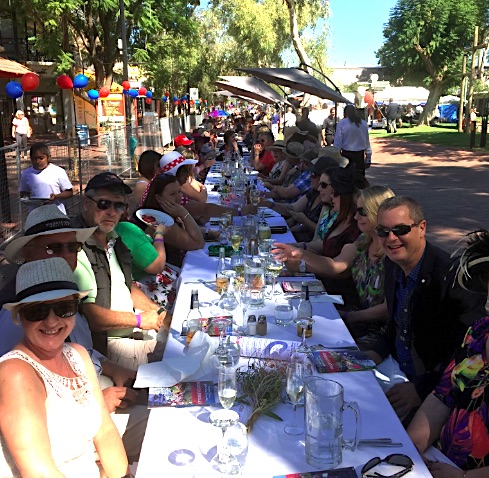 Q: How long was the longest lunch in Alice Springs yesterday? A: 80 meters.

Well, in fact it was four hours when in brilliant autumn weather, 180 people sat down for a variety of lunches from six local restaurants at tables stretched out in the Mall.

It was the fourth annual Alice’s Longest Desert Lunch to raise money for the Hamilton Downs Youth Camp (at top), 75 kms north-west of Alice Springs.

The main drag again proved itself as a superb venue for entertainment, especially when it is conceived and managed by local volunteers.

Apex managed the drinks, the Rotary Club of Alice Springs served them, Girl Guides escorted the guest to their seats and prisoners set up and pulled down the venue’s tables, chairs, umbrellas and enclosures.

Pastoralists Gary and Barb Dann donated a one-tonne, two-year old heifer worth around $1200 which auctioneer Dominic Miller turned into $7000 with the support of Milner Meat who will be butchering and dressing the beast.

Hamilton Downs chairman Ren Kelly (pictured) says the day turns over about $25,000 which will result in an estimated profit of $14,000.

He says the NT Government pays the wages of the youth camp’s manager but materials for maintenance and repairs need to be funded from hires and fundraising.