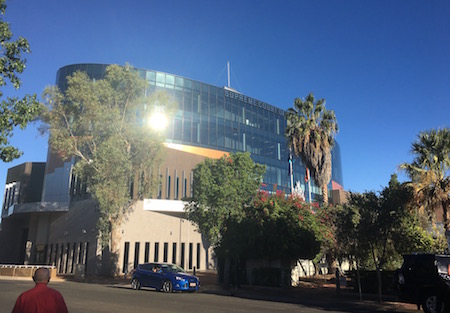 The move to the upper floors of the new Supreme Court building by the local office of the Department of the Prime Minister and Cabinet (DPMC) is a “downsizing”.

Its present premises, in the Jock Nelson building on Hartley Street, are described by a DPMC spokesperson as “too large” and the lease there expires this year.

Taking with them “a number of Commonwealth Government agencies” will save the public purse “approximately $1.4m over the life of the lease”, says the spokesperson.

Just how much will be spent, however, is not known, as  “details of the new lease arrangements are commercial-in-confidence”.

Repeated questions by the Alice Springs News Online to the NT’s Department of Justice about the cost of its 20-year lease of the new Supreme Court premises remain unanswered. The News understands it comes to $1m per annum.  It has cited this amount since 2014  and it remains uncorrected. (Over 20 years, it would represent a saving to government, argued then Attorney-General John Elferink, who expected building a new court would cost some $30m.)

To date, the Department of Justice has answered none of our detailed questions about its involvement in the design and development of the new building. What does this say about their professed value of “Accountability”?

Meanwhile, one of the inadequacies of the new building is already being acknowledged. 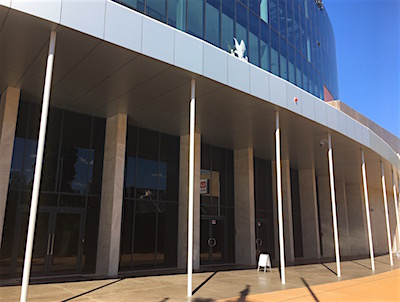 The Western Australian Government’s Court Standard Design Brief, which was adopted by the NT for its technical requirements, stipulates that the building should provide: “A clear and legible pedestrian entry point at the perimeter of the building easily identifiable from street approaches by vehicle or pedestrians” and  “An obvious main/front entry that is perceived as a single entry.”

The News has previously noted the building’s failure to do this. There are three front entrances, all of a kind. The main entrance now has a little sandwich board outside, pointing to it.

Another stipulation of the technical brief is that the pedestrian entry into the building have “automatic sliding doors”. This too has fallen by the wayside.