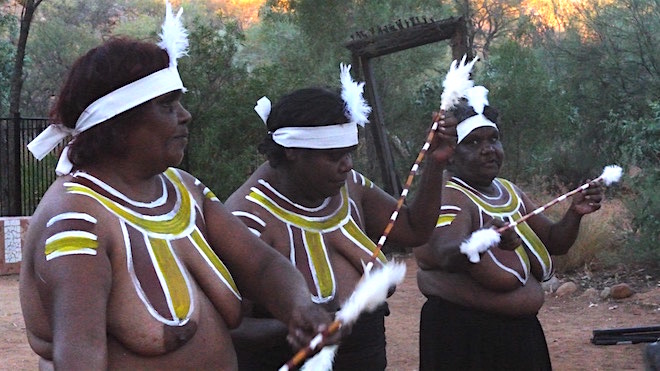 Arrernte women sang and danced the Northern Territory Writers Festival into country at last night’s opening event. As the sun went down in the Olive Pink Botanic Gardens and in front of an appreciative audience of around 200, songs from the Simpson Desert rang out. Jane Young, who introduced the women, explained they were songs passed down from her grandmother. She then joined the old ladies of Akeyulerre Inc (at bottom) who were strong in voice and quick with humour, joking and teasing the younger dancers (above), urging them to “do it properly”.

It was the kind of opening that makes Alice Springs feel “so connected”, more so than Darwin, said NT Writers Centre chair of the board, Professor Martin Jarvis (who lives in Darwin). 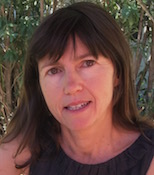 MLA Dale Wakefield, representing Tourism and Culture Minister Lauren Moss, thanked the women for their reminder that stories have been told on this country for thousands of years.

Ms Wakefield said she has always been a keen reader, as has Ms Moss, and both regret the lack of time for it in their present lives. A book club had been formed by women with like interest on “the Fifth Floor” (of the NT parliament), but its first meeting had to be cancelled because no-one had actually read the book.

Deputy-Mayor Jamie de Brenni, speaking on behalf of the Mayor, described himself as the opposite, a “boofhead” who loves football. But recently he has learned to “lose himself” in a  book. He thanked those in the audience for “doing what you do” that makes that possible.

Festival director Dani Powell (above right) spoke movingly of the festival theme – “Iwerre-Atherre” in Arrernte, “Crossings” in English. The terms are not translations of one another, she said, but sit side by side, in conversation with each other. As the Arrernte term signifies, it’s all about two roads meeting that “neither block nor erase one another but travel together”.

The writers who followed Ms Powell on to the stage all took up the theme in their own ways. 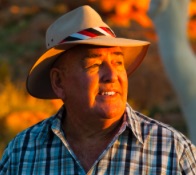 Ted Egan AO (left) called for resources to be poured into the preservation of Indigenous languages, in particular by writing them down “comprehensively”, as the spoken word only is too vulnerable to being lost. He drew comparisons with Welsh, which had been suppressed, its speakers once forbidden to utter it, but it survived thanks to being written down. Some Australian Indigenous languages have already been written down, one of them Ngaatjatjarra, the language of Lizzie Marrkilyi Ellis, a guest of the festival, and author of a memoir, Pictures from My Memory.

Poet Penny Drysdale, whose first collection, Dew and Broken Glass, will be launched on Saturday,  spoke of her “insane pleasure” of working with the Akeyulerre women, so much so that she can have trouble moving out of  their presence even when she goes away: in a Melbourne bathroom the old ladies are there “creeping like smoke / through thick curtains / creeping through / the congestion / of a brain / that hasn’t been / unpacked”.

Bruce Pascoe, Bunurong, Tasmanian and Yuin man and prolific author, including of the multi-award winning Dark Emu, spoke  briefly of “mother earth” in one of his native languages, said to be extinct. Then he read a poem he had composed for the occasion, about the colonisers’ re-naming of a native place, Maraminga, meaning “fish spear”, as Pig’s Crossing, reflecting their belief in their God-given right to claim the land for their new economy. “And the rest is history” was its closing line.

Other writers enticed the audience with their evocations of distant places, long journeys, migrations, and with the sonority of other languages and accents – crossings at many levels.

Agustinus Wibowo, a multi-lingual Indonesian travel writer, spoke a poem set on the border of Afghanistan and Tajikistan, where people, travelling on two roads running parallel to one another but on either side of a wide river, look across at one another uncomprehendingly.

Eunice Andrada spoke of her people of the Philippines as having to constantly move because of “need or natural disaster”. Part of her poem she recited in a Philippine language, concluding, “Because I am a daughter of diaspora / and by default of an open sea / what language will not meet me with rust?”

Sudanese-born Abraham ‘Abe’ Nouk (right) was loving being under the strong sun of The Centre. He spoke of storytelling as the great “common ground” between peoples in the cycle of life. We are “the inheritors of our ancestors’ voices”, he said, so “speak child, tell your story”.

Fittingly, the event closed with Indigenous ancestral songs, this time from further afield: the voices of women, who have travelled to the festival from the Gulf Country to promote their Songbook, sent the crowd on its way. 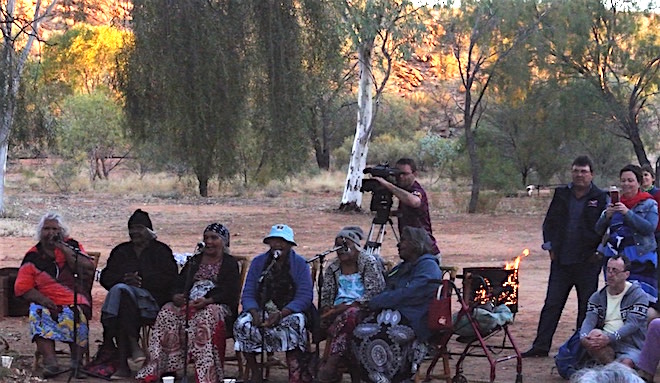