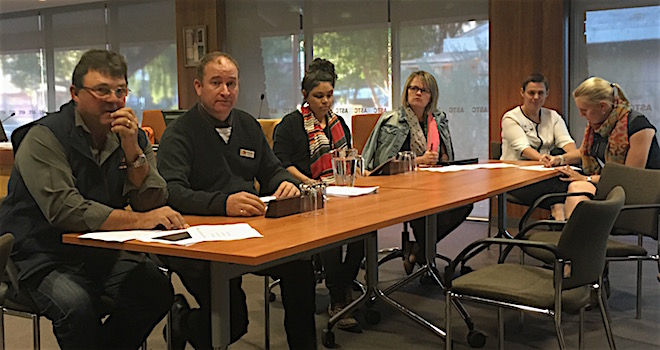 Above: Second from left is Scott Allen, council’s new Director of Technical Services, who might help spend some the surplus. In this part of the meeting he was addressing Ilparpa Road residents about the construction of a footpath along the road, due to start 1 July.

The permanent appointment of a Director of Technical Services might help with the spending of the Town Council’s more than healthy surplus, revealed at last night’s meeting to be (to date) a whopping $12m.

As Councillor Jade Kudrenko remarked, that is roughly one third of council’s total operating revenue.

Council’s financial performance had come under close scrutiny during the meeting, principally from questions posed by Councillor Eli Melky, who has to his credit the public disclosure of substantial monthly reporting of council finances, including itemised expenditure down to the last cent.

Before his concerted efforts to bring this reporting out of confidential session, ‘open’ Finance Committee meetings were a tick and flick, over in a matter of minutes.

Last night Cr Melky (having done his homework the night before) worked line by line through the Budgeted Statement of Financial Performance supplied by Director of Finance, Dinesh Pillay, coming eventually to the surplus figure.

How does it comply with the Local Government Act? he wanted to know. Council is not supposed to be in profit, is it?

Council cannot budget for a surplus, confirmed Mr Pillay. He also said it was a “bit early” for a clear picture of what the actual surplus will be. The figures supplied were for “year to date April”.

He commented that having a full-time Director of Technical Services will address a lot of the issues of unspent budgets. Former works manager Scott Allen is now in that executive job, which has been vacant since last November.

However, there are only two months left of this financial year, and council is deeply into setting its budget for the coming year, which was what motivated Cr Melky’s questioning.

He was about halfway through when Cr Brendan Heenan, in the chair, suggested that if he had any more questions he could take them up with Mr Pillay by email.

Cr Melky politely declined, insisting on the importance of asking his questions in an open forum. Cr Kudrenko said she also shared his concerns.

Mr Pillay remained gracious and precise under fire and promised further detailed reporting next month to clarify some of the areas of confusion and query.

A better understanding of council’s GST position, what it owes, what it can claim back, was also requested by Deputy Mayor Jamie de Brenni and Mayor Damien Ryan.

On council’s vulnerability to the reduced GST distribution to the NT, Cr Melky was disappointed that a formal letter had not been sent to the NT Government requesting information about impacts on council revenue from NT budget cuts.

What council can’t afford is a misunderstanding of its position, he said, and from his examination of the budget documents supplied he could not see a mitigation strategy in place.

Mr Pillay said he had put the question to NT Treasurer Nicole Manison at the Convention Centre “in front of 70 witnesses”.

But clearly, putting the question is not the same as getting a precise answer, and Mr Pillay’s only real assurance last night was that the government had committed $4m to supporting public library services in the Territory although he didn’t know how much Alice Springs would get.

Cr Melky’s budget campaign is not over: he gave notice last night that he intends to move a motion that council pay off in full its Civic Centre loan. Repayments currently stand at around $500,000 per annum, he said. He asked Mr Pillay to prepare detailed information so that council could consider the issue.

There’s an election on the horizon. Cr Melky referred more than once to the possibility of himself and others not being able to continue in their roles beyond August. Council moves into caretaker mode on the 3rd of that month.

So he was making the most of his opportunities last night. He can be long-winded (at times frustratingly so) but he can also make good points. For instance, he asked the Director of Corporate and Community Services Skye Price what she is doing about the slump in pool visitation, down every month since last December.  What are the “marketing strategies” to counteract this decline? he wanted to know.

Ms Price sought to reassure: a masterplan and a business plan are underway as well as a marketing strategy for staged implementation.

When would this be put before the elected members, Cr Kudrenko (another straight-shooter) wanted to know.

Ms Price said the “aspiration” was to have all that documentation complete by the end of the calendar year.

Cr Melky appreciated that a detailed business plan is warranted, but right now a simple marketing strategy is what he was after, “a PR exercise” to promote what is on offer at the Aquatic Centre (which has been dogged by maintenance issues particularly affecting the 25 metre indoor pool).