Making the most of The Rock challenge

“There will never be any direct flights to Ayers Rock.” Spoken in his trademark slow drawl by first NT Chief Minister Paul “Porky” Everingham, this quote has entered the annals of the Territory as a sample of political promises and their fickle use-by dates.

Today we’re trending towards the opposite: Dale McIver (pictured) is aware of locals driving to Yulara – a return trip of nearly 1000 kilometres – to catch a cheap flight to Sydney or Melbourne and back, leaving their cars at no charge in the Yulara airport carpark.

For example, the cheapest flight from Yulara to Sydney on May 31, according to Webjet, is $219. Flying from Alice is advertised for $350.

Ms McIver is the chairperson of Tourism Central Australia (TCA), the lobby for one of the region’s only two stand-alone industries not being funded by taxpayers, or largely dependent on them (the other one being cattle).

Alice born and bred and with her day job being event management, Ms McIver isn’t daunted by her task: Alice and The Rock have swapped positions of destination and side trip. She now has to make this work.

“Our operators are meeting the challenge,” she says. Several of them are starting and ending their tours at The Rock, but taking in Watarrka (King’s Canyon), the West MacDonnells and Alice.

People increasingly hire cars at the Ayers Rock Resort for a week or so, much longer than they would need to explore the limited sites at The Rock: It’s a sure sign they are doing much more of The Centre.

Ms McIver says the visitation pattern is slightly more bums in beds in Alice Springs, but a higher per-visitor revenue by the Rock Resort, having now overtaken The Alice in earnings.

However, the cheaper rates in Alice Springs are something the town should promote as a clear incentive to spend more time here. 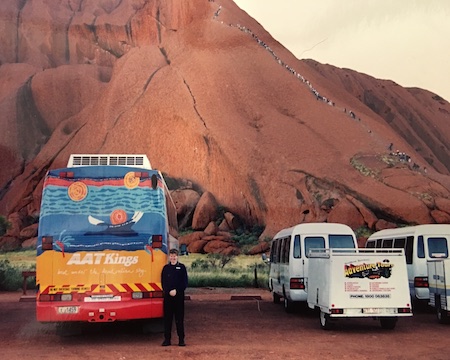 The attractions of The Alice, in their current ranking of popularity, are the Desert Park, Telegraph Station, School of the Air, Reptile Centre and Flying Doctor.

Promotion of the women’s and the road transport halls of fame and Olive Pink Botanic Garden could lift their image and be useful to extend the season at either end.

“The first question I usually get asked at trade shows is: What’s new, what’s different,” Ms McIver (pictured on the job) says.

For example, the field of light show at Uluru created a significant spike of visitors there.

Will the Alcoota fossils, now being returned to the Mall, make a difference?

“It’s still too early to tell,” she says.

Amazingly, the government did not consult TCA, which receives NT Government funding, before announcing the $1.5m move.

“They seem to be still in the planning phase.”

Has there been a cost-benefit study?

“Not that we have seen yet.”

Ms McIver says tourism in The Alice has declined from its boom times in the 1980s largely for reasons not of its own making: International and domestic aviation prices and policies, a high dollar and scheduling of school holidays, the latter affecting crowds at events such as the Henley on Todd.

Alice adapts as well as it can, for example, moving the dry river regatta from a hotter part of the year to the third Saturday in August.