Town artists extend a hand to visitors from APY Lands 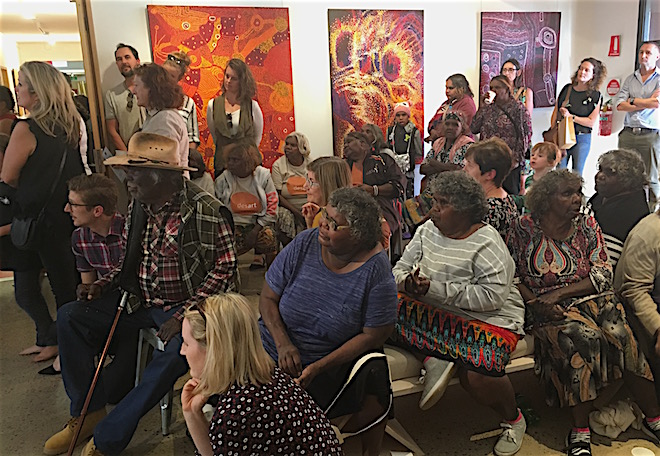 In a small Aboriginal-owned gallery in a back street of Alice Springs, the exhibiting artists include sought-after stars from the APY Lands in the far north-west of South Australia, and the catalogue includes significant collaborative works.

At the opening – a fortnight ago – the artists were present and on the walls and with their words they related their enduring message. As Mumu Mike Williams put it, “When we die, tjukurrpa is still there”.

A collaborative painting in which he clearly took a lead (he has a body of work using the map of Australia as its ground) could stand as the symbol of the movement for constitutional recognition: a more communicative work about prior and ongoing occupation would be hard to imagine (see image below).

But this kind of driver of their art-making is not the only focus of this show. It has been mounted to draw attention to a new initiative by the combined art centres of the APY Lands in partnership with Tangentyere Artists, as reflected by the show’s title,  Kutjupa ngura, waltja kutju, translated as “Different Country, One Family”. 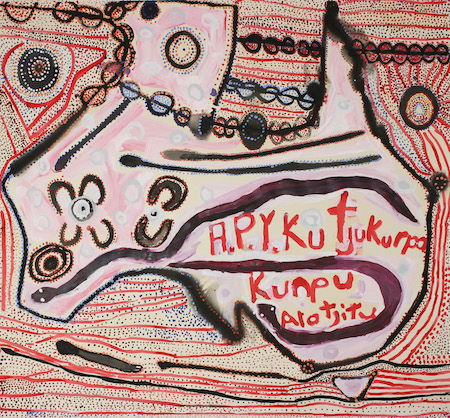 The APY art centres are some of the most dynamic in the country. The names speak for themselves: Tjala, Ernabella, Kaltjiti, Iwantja, Mimili Maku, Tjungu Palya. In their collective they are joined by Maruku Arts based at Uluru, Tjanpi Desert Weavers based in Alice Springs, and Ara Iritja Aborignal Corporation, whose aim is to build a digital archive of historical and cultural material belonging to Anangu.

So what need does this powerhouse have for the partnership with Tangentyere Artists, whose central focus is on supporting artists living in the town camps of Alice Springs?

It’s about offering “a safe place for any Aboriginal people here in town to work with us”,  Jane Young, a town camp artist herself, told the opening night crowd. She was speaking as the chairperson of Desart, the association of art centres.

This is particularly important over summer, when art centres are generally closed and “artists are vulnerable to being exploited without the safety net” of their art centres, explained Philip Watkins, Desart CEO.

The model is clever, maximising the use of existing resources in town – the studio and gallery of Tangentyere Artists, situated on Fogarty Street. Over the Christmas months the APY Art Centre Collective supports the studio operations by engaging one or two staff to work alongside Tangentyere staff.  The collective raises the funds – in the past from the Australia Council –  and provides the admin.

“Artists who develop that relationship with Tangentyere over Christmas return throughout the year,” says Skye O’Meara, formerly manager at Tjala Arts and now manager for the whole collective. 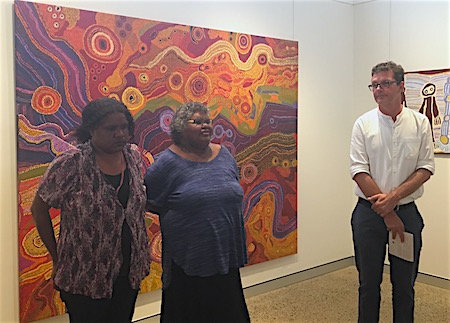 “Generally it is the same artists and family who require this support due to ongoing medical issues, or family challenges that require support from service providers based in Alice Springs.”

Left: Yaritji Young speaking about the collaborative work behind her, Seven Sisters, on which the other artists were Tjungkara Ken, Freda Brad, and Maringka Tunkin. Anne Thompson translating, Philip Watkins looking on.

Is there an issue of capacity for Tangentyere? Not with the support of the APY collective, says Ms O’Meara. She also suggests that the model has boosted the dynamism of the Tangentyere studio.

She says the APY artists are very respectful of the way things are done at the “dream studio” which is relatively new, “state of the art, and massive in comparison to many studios on the Lands”.

While the APY artists are visitors, there are family lines that connect them to town camp artists, particularly between Fregon community and Margaret Boko.

“So the Tangentyere artists are enjoying new company, and a new dynamic over the Christmas period, and I think the project is great for both APY Art Centre income and Tangentyere income.

“We are still fine tuning the details for artists who seem to be developing more long term relationships with Tangentyere, with partnered or dual representation, but these are not big hurdles.

“Really it has been a fabulous collaborative project. The biggest measure of success is that not one single paining has been produced for a dealer’s operation when the APY Town Studio has been operational. It really is a case of Anangu leadership getting ahead of the challenge, rather that constantly responding to the consequences of artists’ experiences with carpet baggers,” says Ms O’Meara.

Exhibition shows until 17 May.