Neither Education Minister Eva Lawler (at right) nor Families Minister Dale Wakefield (at left) will comment on the denial of education to a six-year-old girl, Santanya Namatjira, alleged by members of her family and friends.

They say the girl, who lives in the bush community of Wilora, has on several occasions been prevented by the principal from coming to school.

Neither Ms Lawler nor Ms Wakefield will be interviewed on the issues. Nor will any further information be provided by the department.  And Ms Lawler’s media minder has made it clear that the school principal at centre of the scandal, Marita Mckenzie, is not permitted to be interviewed.

It has now been revealed that the child’s mother, Sally Namatjira, has made a complaint to the Children’s Commissioner, Colleen Gwynne.

And a former youth worker at the community, Marie Rosa Rodner, has told the Alice Springs News Online about her confrontation in 2015 with Ms Mckenzie over what she sees as hardline attitudes towards young people in the community and challenges to her authority. 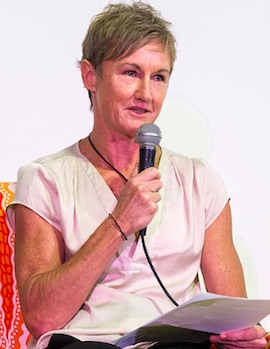 Ms Namatjira was assisted in formulating her complaint to the Children’s Commissioner (at left) by a person who spoke to the News on the condition of not being named.

That person says the letter contained the following complaints and information:-

The principal waits for Santanya to turn up at school, then talks to her like a dog and tells her to go home.

Two officers from the Department of Families had a meeting with Ms Mckenzie, asking if Santanya could use the school playground while the meeting was in progress, but that was denied, with Ms Mckenzie yelling it was her duty of care and Santanya had to go home.

Ms Mckenzie raised her voice at the meeting so many times that Santanya got frightened. The Department of Families officers told Ms Namatjira to go home because of Ms Mckenzie’s yelling.

The two officers stayed to make a plan.  They came to see Ms Namatjira after the meeting and told her that they were not able to make a plan for Santanya (below right) to go back to school and they would go back to their office and see what they could do.

She hasn’t seen them since, but she wants them to come back and help.

According to our source, Ms Namatjira says in her letter to the commissioner she is very sad about the situation; she asks for help, because she wants her girl to go to school.

Ms Rodner said in a written statement to her employer at the time that the clash with Ms Mckenzie was about “children and teenagers who do not attend school regularly (truants), being allowed to participate in the Youth Sports and Recreation P

Ms Rodner was working in the region north of Alice Springs as a sports and recreation worker, visiting Wilora once or twice a week. She is now doing similar work for another employer.

She says Ms Mckenzie had told her “that at the school they had a strong policy against truancy, and that she expected Youth Sports and Rec (as Youth and Communities was formerly known) to not allow children who had not gone to school, to participate in the activities of Youth Sports and Rec, particularly visits to waterholes”.

In her account of the clash with Ms Mckenzie she wrote in part: “I was not in favour of excluding children and teenagers from participating in Sports and Recreational activities as I considered it would further marginalise them from school or other positive community activities, and possibly lead to antisocial behaviour.

“I said I consider the Youth Sports and Rec program is a way of diverting children and teenagers from unsuitable and dangerous activities.”

Ms Mckenzie “seemed annoyed with my position regarding the role of Youth Sports and Rec.

“She said that she had to live in the community and that people of the community (had or would, I cannot remember which of the two) come banging on her door demanding why truants were allowed to go to waterholes.

“She then said that she had a lot of work just managing to get children at level on literacy and numeracy.

“I asked her if she had any special programs for children with learning difficulties.

“This seemed to annoy her even more (it was not my intention, I was trying to change the subject to deflect from the previous topic), and she did not answer my question.

“She then told me I was not welcome through this door (pointing at the school entrance) at which point I said good bye to her and the children, and left.”

Ms Rodner says the only reason for going public is to “provide some support to the child’s situation”.