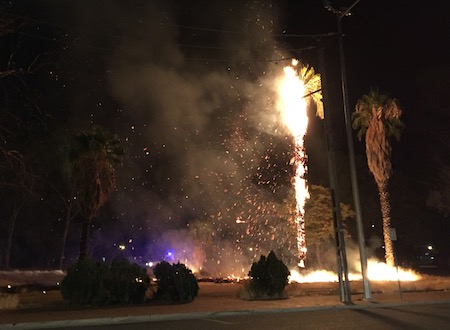 Firebugs who have massively increased the workload of the fire brigade every night over the last three weeks have now attacked the town centre.

Station Officer Adrian Sgarbossa says at 7pm yesterday a “drunken female” was seen lighting grass in several places on the vacant Melanka block at the northern end of Gap Road.

One of the tall palm trees was destroyed, but the fire crew managed to save the one next to it.

The sacred trees on the block could also be saved, because unlike many destroyed south of The Gap, they do not have hollow trunks.

Mr Sgarbossa says last night there were five other deliberately lit fires, near the former drive-in (at 8:30pm), along the railway line south off The Gap and at Little Sisters (at 12:23am).

In the northern part of town blazes were started in Head Street and Woods Terrace at 3:31am.

All were the work of arsonists, he says.

The Melanka fire started when the main fire crew had been called out to an “automatic” fire alarm at the casino.

With the second crew attending to the Melanka fire, there was “reduced response capability” to any car accidents or house fires that might have occurred.