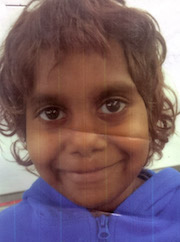 While Aboriginal Affairs Minister Nigel Scullion displays himself on national television encouraging bush kids to go to school, six-year-old Santanya Namatjira (pictured) would like to do nothing more than just that.

Trouble is, her school won’t let her, according to members of her family and friends.

When we raised the issue with the NT Education Department, all we got was a one word reply: “No.”

The question we had asked was: “Has a student been barred from the Wilora school in the past 12 months?”

I spoke to Santanya and her mum’s aunty on the phone today, and to Elvira Namatjira on Saturday, both on the phone and in person.

Santanya said to me: “The teacher is telling me not to go to school.”

That was at 1:55pm. The girl was at home, where – according to her mother’s aunty – she spends most days.

The aunty and the grandmother both said the school’s refusal to allow the girl to attend class has been going on for about a year.

During that time Santanya spent some time with her grandmother and attended Sadadeen Primary school but she missed her friends at home and – amazingly – the school that, from all accounts, is treating her so shabbily.

Wilora is 250 kms north of Alice Springs on the Stuart Highway.

The accounts the family gave me tally with those of a friend of the family who asked to remain anonymous:-

“The principal of Wilora school [Marita Mckenzie] is wrongfully denying a child an education where she lives.

“She phoned the police to remove the child from the school. The removal was not necessary.  Then the principal wrongly said the mother had verbally abused her.

“The police took the mother to the school and made the mother apologize to the principal.

“A community member witnessed what happened and the whole small community is very angry with the principal,” said the friend of the family.

“I think the child should be allowed to go to school if she wants to.

“The stories that the principal has made up about the child are ridiculous and even if true the behavioural issues should have been dealt with in a reasonable fashion.”

This information has been confirmed by a person familiar with the facts but has asked not to be named.

PHOTO: Santanya Namatjira, aged six. The mark across her face is from a crease in the photograph.

We received the following message from the NT Department of Education at 3:58pm:

“The department does not have any record of a student being suspended or barred from Wilora School for the past 12 months.

“This has been confirmed by the relevant department representatives and no further comment will be provided to this, given we do not have any factual evidence to support your statement.”

Further, my request of 9:23 am to “ask someone from the NT Government with detailed information about the matter to ring me” is clearly being rejected.