Home Issue 3 They must be joking!
Issue 3Issue 4Volume 24

They must be joking! 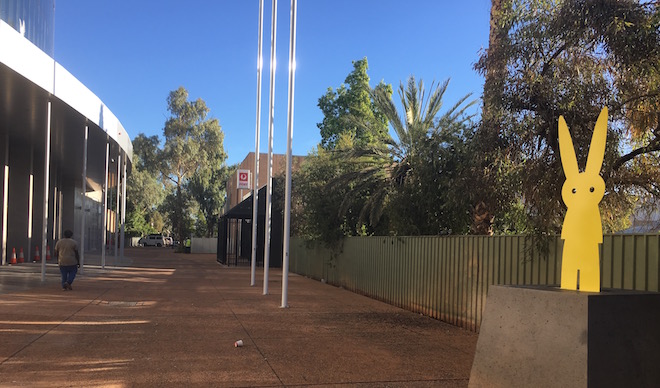 No, it’s not an Easter bunny gone astray from a nearby shopping centre. This mild steel, laser cut yellow rabbit bolted to its massive concrete plinth is ‘public art’  and it’s staying, marking the entrance to the reopened thoroughfare between Parsons Street and the Hartley Street carpark, which provides the main access to the new Supreme Court building. 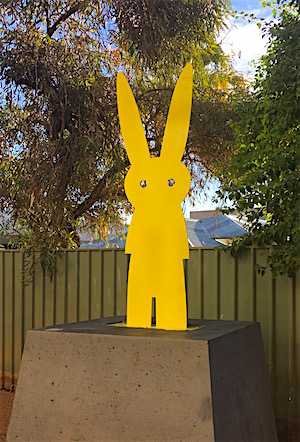 As the visual marker of the approach to the court, the one-minute wonder rabbit – no plaque yet but surely from the Melbourne studio of Peter Mclisky (see image at bottom) – is dismaying.

“Dignified, stately, and authoritative”: these were the qualities sought by the Territory Government for the building.

They are shallow enough given the scope of what could have been striven for – such as an expression of “a fair and accessible legal system for the community”, in keeping with the Department of the Attorney-General and Justice’s vision statement.

Careful thinking about those terms in the context of our troubled jurisdiction – in which Aboriginal people make up 80% of the court lists despite being only a third (36%) of the region’s population – would have led to a very different result.

The thinking would have meant consultation, but there was none, virtually guaranteeing the massive missed opportunity that we now must live with for decades to come.

The government had its technical requirements as to the function of the court spaces, but otherwise it was open slather, underwritten by a 20 year leasing agreement, for owners of the site, the developer 19 Parsons Street Pty Ltd, an affiliated company of Sitzler Bros.

The building, despite its grandiosity and solemn proclamation of its principle purpose, is a commercial building – built for profit. Sitting above the lower storeys housing two court rooms and related spaces, are the fully glazed oval-shaped upper levels available to commercial tenants. (An early taker for their “abundance of natural light” and “incredible views of the awesome Central Australian landscape” – to quote the real estate blurb – is the Department of Prime Minister and Cabinet.) 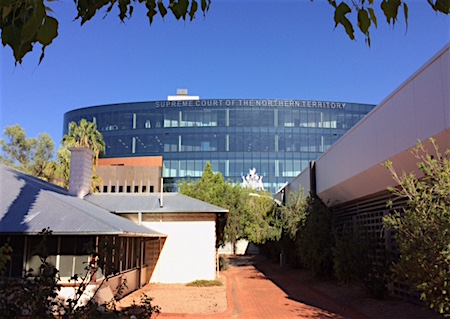 So we shouldn’t be too dismayed by the rabbit. In many ways the form of this feral invasive species is the perfect representation of what has gone on here – the repudiation of all that is rooted in this place, including all the small steps taken between its peoples to better understand one another and so better live together in this hard, beautiful environment.

But wait, the building may be a privately-owned commercial venture, but the thoroughfare out front is public land, vested in the Alice Springs Town Council, and they have a public art policy and a Public Art Advisory Committee, don’t they?

Well, in a confidential meeting in August last year our civic leaders specifically negotiated away any role in relation to public art for the thoroughfare. Why this should have been a matter discussed behind closed doors and never put to the public is not clear.

Council business papers for March this year show they executed a deed of agreement with 19 Parsons Street Pty Ltd, through its director Michael Sitzler. The term of the deed is 20 years and its main purpose is to formalise arrangements for the cleaning, repair and maintenance of the thoroughfare, which will be council’s responsibility in return for an annual $5000 contribution by 19 Parsons Street.

In the background notes to the recommendation that council sign this deed of agreement, council solicitor Chris Turner notes: “The minutes of the [August 2016 Ordinary] meeting record that the CEO advised that the development of public art would be decided by the Public Art Advisory Committee and come from its budget line and it was resolved that the public art section be removed from the negotiation.” [Emphasis added.]

So that’s that. No joke.

Below: Public art anyone? Some of the variations on a theme from Peter Mclisky and this in a town that is a hub for desert Aboriginal art, acclaimed the world over, and soon to be the starting point of the Territory Government’s $100m Arts Trail initiative.