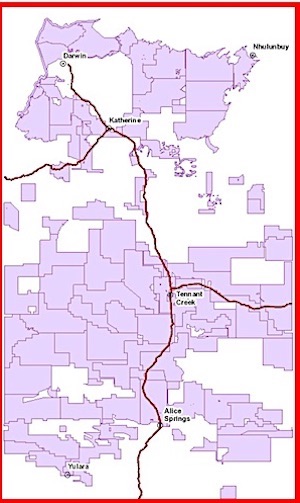 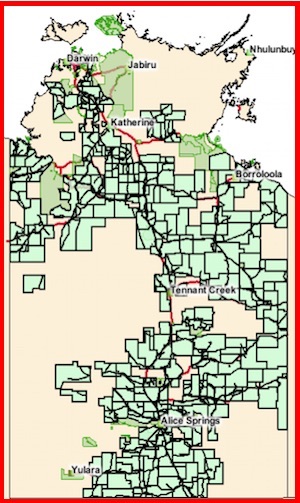 This is where oil and gas will turn into milk and honey, and make us rich beyond our wildest dreams – or it’s the fracking battlefield of the future, depending on whom you talk with.

The map above left shows where petroleum exploration permits have already been issued.

The map above right shows the land under application for petroleum exploration permits.

Only a tiny fraction of the NT has onshore petroleum production licences in production, in the Palm Valley and Mereenie fields west of Alice Springs.

On land held under Aboriginal freehold, pursuant to the Land Rights Act traditional owners have a mining veto on land under application, but not once an exploration permit has been issued.

Holders of pastoral leases do not have a mining veto.

However, on pastoral leases where native title has been declared, or where it may be declared, native title holders may influence the operations through protection of sacred sites or management of “significant disturbance”.

It’s worth in this context to recall the statement in November last year by the CEO of the Northern Land Council (NLC), Joe Morrison, that Aborigines “own and/or have legally recognised rights over more than 90% of northern Australia.”

That clearly includes in the NT 53% held under inalienable freehold under land rights, and the remainder of Mr Morrison’s figure relates to native title.

The Central Land Council covers the rest of the NT to the south of the NLC area.