Council gets roasting on pool delays and sugar ban 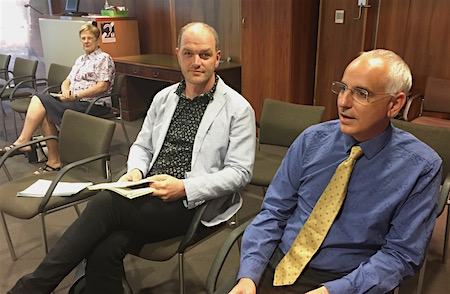 As Red Hots Arts personnel prepared to brief the Town Council on plans to revamp their building, Judith Dona was lining up to deliver councillors a roasting over prolonged swimming pool repairs.

After waiting “40 years” to get the 25 metre heated indoor lap pool, she is “not impressed”  and “very annoyed” that it is still closed for repairs to be done on the “significant tiling damage” – the latest official description of the problem – that has dogged the relatively new facility (it was also closed for repairs in early 2016).

Last month’s report to councillors from acting manager of the Aquatic and Leisure Centre, Leon Tripp, described  a “catastrophic failure of the [25m] pool tiled surfaces”. The pool had been drained in February  as council sought advice form a tile and adhesive consultant on the reasons for the failure and a remediation plan.

Why were the tiles coming off to start with, Mrs Dona wanted to know (and hopefully the consultant will be able to tell us), and why doesn’t council use local tradies and council’s own workforce to get repairs done in a timely fashion? And why isn’t the 50m pool heated?

They had promised the work would be done by March, now this is April and she wants it done by the end of the month!

She was frustrated about the impact of the closure on training for young athletes, including her granddaughter (although Mr Tripp’s report this month says the Swimming Club continues to hold regular squad training days). Mrs Dona sees the whole mess as incompatible with Central Australian ‘can do’: “You’re all locals!” she said more than once. 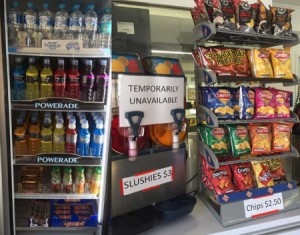 She also took aim at council’s canteen policy that has largely removed sugary and other unhealthy foods from sale. She said council was removing parents’ authority over what their children eat, and deplored that a parent might not be able to reward a child’s good behaviour with a lollipop.

She normally goes to the pool three times a week and is a diabetic. What about her needs for sugar and carbohydrates? It is all “unbelievable!”

In the chair, Councillor Jade Kudrenko told Mrs Dona that the canteen policy on sugary foods had been decision of council and they would get back to her later, but on the main issue of the pool closure she referred her to Director of Corporate and Community Services, Skye Price.

Ms Price replied along the lines reported last week, including advice that the 50m outdoor pool should be warmed and ready for use today (new thermal blankets have been ordered and are in transit and the boiler turned on). She also said that repairs to the multimillion dollar facility could not be undertaken by domestic tilers and council staff.

A 20-page report from the consultant was available for councillors to consider in confidential session last night.

Later in the meeting, Cr Eli Melky raised Mrs Dona’s complaints about the canteen, for which he had some sympathy, including her point about the removal of choice from parents. Cr Kudrenko suggested that council look at some informed alternatives for diabetics. Ms Price said sugar is available for “the barista products” and she has taken advice from a dietician and will come back to council with more options, particularly in the ‘green’ or healthy food category (there are several items available in the amber and red categories).

Note: Earlier today the thermal blankets were reported as having been installed – they are on the way;  the 20 page report to councillors was reported as being prepared by Skye Price, when it is in fact the consultant’s report. The article has been amended and some information about the canteen stock has been added. – KF

Red Hot Arts is seeking to rebrand its building at 67 Bath Street, opposite Billygoat Hill – one of the highest viability locations in Alice, according to its general manager Cy Starkman.
The umbrella and advocacy organisation, funded by the NT Government, was not seeking financial support from council but will want their approval for new signage, including LED ticker signs. 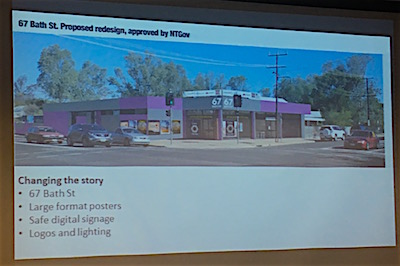 The building will henceforth be identified by its street address, rather than Red Hot Arts. It will get a  new coat of paint – pink and grey, instead of the current dark red – and may also eventually support a mural (or two). Its corner facing into Stott Terrace will sport large format posters for coming events – this is already being trialled – and the facade will have an upgrade to lighting and clearly identify the principal tenants –  NT Writers’ Centre, Artback NT, Music NT and Red Hot Arts.

Cr Eli Melky asked if the organisation will seek revenue-earning opportunities from the promotional displays. Mr Starkman said they will want only 100% cost recovery as they exist to promote the arts, not profit from them.

Later in the meeting, council briefly considered a request from the organisation for a $15,000 grant as well as in kind support for this year’s Alice Desert Festival.

Skye Price had recommended approval, but a decision was deferred pending clarification of their expectations (“marquees” and “mainstream event management” had been mentioned in-kind support, more than the usual clean-up and shading).

Mayor Damien Ryan also wanted more and clearer detail on the festival’s intentions for “Indigenous Young Adult Engagement”, involving them, under the guidance of a creative producer and construction artists,  in building sculptural works to enliven the festival site.

Documentation included a photo history of the festival parade, demonstrating the importance of involving schools, artists in schools, and Rotary’s Henley on Todd floats.  But this emphasis on the parade seemed to be at odds with the intention for the sculptural works, for which Red Hot is seeking the grant.

It looks like council will at last move on a more welcoming entry  to the southern end of Todd Mall.

The entry’s domination by ‘No’ signs was last drawn attention to by Alice Springs News Online in 2013.  Nothing has changed in all this time. 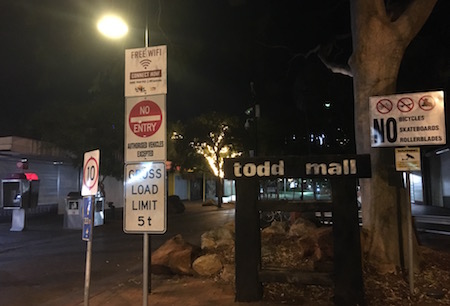 Now members of the Public Art Advisory Committee (PAAC) have seen a concept drawing for a new entry by architect Miriam Wallace, a member of the committee.

Right: More ‘NO’ signs on the other side clutter the entry  into the mall.

Although the drawing was not circulated to councillors, it apparently provides for collating all the prohibitions and other signs onto one pillar, and setting that back past a revamped entry sign (rusted steel, cut with “supergraphic moth and bark motif”).

Mayor Ryan wants to see the drawing before going further; Cr Kudrenko wants to get the process right, including having an idea of how much council wants to spend; and Deputy Mayor Jamie de Brenni wants to hand it over to the the community – get them to “design their infrastructure”.

Meanwhile, the PAAC discussion had put something else on the agenda: a more friendly mall could perhaps also accommodate a bike path! People are riding their bikes in the mall anyway, said Cr Jacinta Price who had chaired the meeting. A clearly marked path would allow it to happen “naturally”. Crs de Brenni, Brendan Heenan and Melky all indicated their concern about such an eventuality.

Cr Melky asked council’s Director of Finance Dinesh Pillay about the impact the cut to the Territory’s GST revenue will have on council revenue.

Mr Pillay said it has been difficult to get clear information but he will have a report ready for council’s next round of committee meetings.

Mayor Ryan expressed his dissatisfaction with Mr Pillay’s information on savings achieved from council’s solar installations. By referring only to dollar savings (estimated at $21,563.81 for quarter ending 31 March), it didn’t tell the whole story, he said, mentioning CO2 emissions savings.

Mr Pillay pointed out that these had been provided by council’s Environment Officer two months ago at which time council had requested to also see the monetary amounts.

Mayor Ryan then changed his tack: certain readings were missing from the table (in particular data from the library) and without them it was not worthwhile. Mr Pillay explained that the library had only that day begun to record its solar usage.

He was not thanked for his pains.