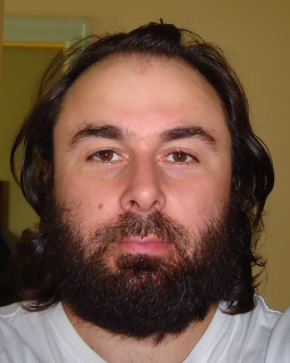 Panda Veleski (at right), the man accused of the stabbing death of French tourist Philippe Jegouzo at a roadside stop north of Alice Springs on 30 November last, appeared in the Local Court by video link from Darwin this afternoon.

His legal team (of two, lead by Russell Hammill) had flown in from Melbourne for the brief mention.

The court has previously heard that Mr Veleski, from Victoria, suffers from “severe schizophrenia”. He did not appear at a scheduled mention on 7 December because of self-harming in the cells. He was subsequently transferred to the Joan Ridley Unit in Royal Darwin Hospital, a secure unit for people with acute mental conditions.

Today Mr Veleski looked pale and serious. His dark receding hair and beard were trimmed and he was dressed in a red t-shirt and loose shorts. He walked unassisted into the small video link room and took his seat.

Judge John Birch was on the bench. Crown Prosecutor Stephen Robson asked for an adjournment of eight weeks to allow completion of the brief of evidence. Still outstanding are the crime scene examination report, the forensic biology report and the autopsy report.

The case was adjourned for further mention in early May. Mr Veleski’s legal team were given leave to appear by phone.

Mr Hammill told his client that they will endeavour to get up to Darwin to see him in the interim.

No plea has yet been entered in this case.