$6.25m centre takes netball out of the sun, rain 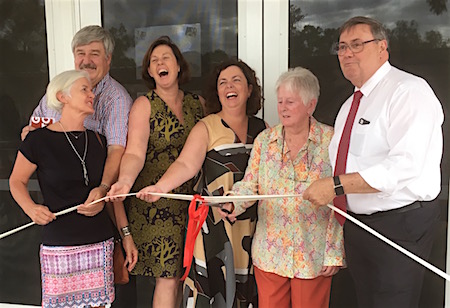 When you’re in a room with 15 Alice Springs women, one is likely to be a netball player, says Antony Yoffa.

With 1000 members netball is the town’s biggest single-gender sport.

Yesterday was a big day for it, for the town and for Pat Gallagher when the $6.2m center, named after her, was officially opened.

Mr Yoffa, a supporter for many years and a senior umpire, was one of the team bringing the cavernous sporting facility to reality, starting their campaign seven years ago.

As for Mrs Gallagher and supporters, they began promoting netball five decades ago, with a no holds barred single mindedness.

She recalled yesterday that convincing the Town Management Board – the forerunner of the Town Council – to make land available for netball was an uphill battle: Because netball isn’t affiliated with a sport that is also played by men, such as tennis or basketball, the girls got the cold shoulder.

They borrowed courts and used courts that had been abandoned because of their poor state of repair, dodging potholes for a time. 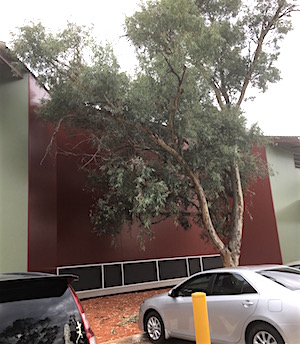 Finally the land where the new centre now stands, in the Old East, was made available, and over the years the outdoor play areas became where every Saturday, hundreds of women and girls competed, and their supporters got together to cheer them on, or to just have a yarn.

After a long wrangle between the NT Government and the Town Council the stadium became reality last year, $4.25m coming from the government, $1.5m from the council and an admirable half a million dollars from local businessman Tony Smith.

The “sprung” courts were christened last night with an Australian Netball League match when Northern Territory Storm took on the Victorian Fury. The Victorians won.

PHOTOS (from top): The interior of the new stadium • Getting ready to cut the ribbon, from left – Long-time office holder Libby Prell; her husband, Tony Smith; president Robyn Donnelly; Families Minister Dale Wakefield; Mrs Gallagher; Mayor Damien Ryan • A recess in the western wall of the stadium to accommodate a sacred tree • Long time supporters and office holders of the sport and other guests at the opening yesterday (spot Adam Giles) •