Home Issue 1 Telling the stories of war: we could do so much better
Issue 1Issue 10Volume 23Volume 24 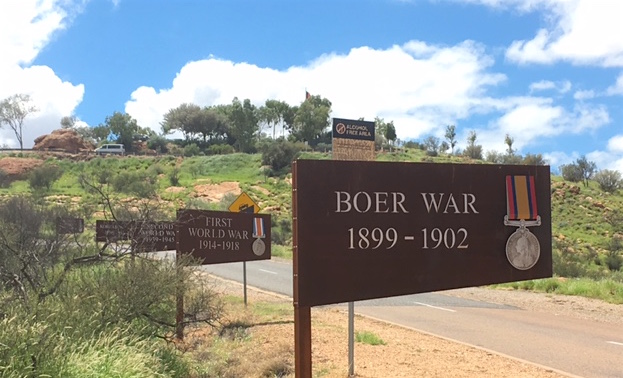 A contribution to our Rest & Reflection series.

In recent years memorialising of war in Alice Springs has expanded significantly: the entire area of Anzac Hill is now bounded by a war story, specifically of wars fought overseas by the armed forces. It is told exclusively from a national institutional perspective. Curiously, the town’s and local people’s own experience of these conflicts is entirely absent. 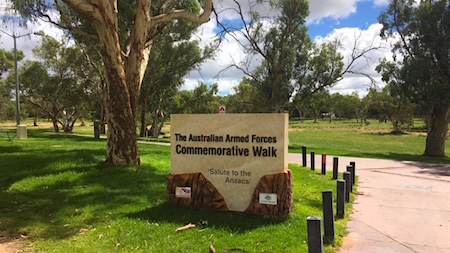 The white obelisk on top of the hill has been there since 1934, erected originally in honour of those who died during the Great War. Later conflicts were added over the years on an adjacent low wall in what now looks like quite an understated way. The commemoration intensified with the Anzac Centenary in 2015, funded by an Australian Government grant ($41,800) and implemented by the Town Council.

Plaques going back to the Boer War and others recording various changes to the diggers’ Rising Sun badge now stud the walking path along the river. At the base of the hill a monument evokes men and women of the armed forces (below right). The roadside bristles all the way up with more plaques, like small billboards, reiterating all over again the names and dates of the various overseas wars (at top). Their reverse sides depict war scenes, mostly of military equipment, some showing soldiers.

At the top of the hill, affixed to the balustrade, are more plaques, giving further detail (of the encyclopaedic kind) under the heading of each of the wars named (twice) on the plaques below. 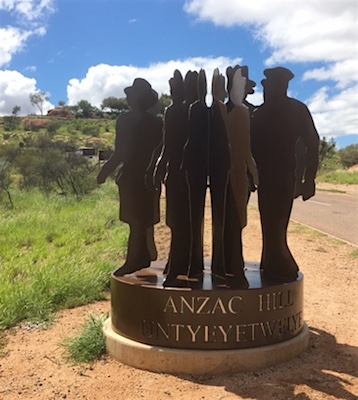 The simple solemnity of the war memorials in many an Australian town – the roll call of local people killed or missing in action – is lost in all this laboured naming and dating. Despite its scale, effort and expense, the commemoration remains somehow mute and unmoving.

Further, its domination of the hill and environs completely ignores, to the point of stifling, the other values held in this site, sacred to the Arrernte, its traditional  owners. Only the Arrernte name for the hill, Untyeyetwelye, is acknowledged (on the base of the monument at right).

I’ve been prompted to make these observations after visiting the exhibition Sappers & Shrapnel at the Art Gallery of South Australia (AGSA, to 29 January), which like the Alice Springs commemoration was supported by the Australian Government’s Anzac Centenary fund.

The exhibition title and the fact that it draws in part on “trench art” held by the Australian War Memorial belie the broad take on the show’s theme.

“Trench art” refers to the objects fashioned by soldiers and other artisans, including prisoners of war and civilians, during wartime. It flourished particularly during World War I when troops were bogged down in the infamous trenches of the Western Front, but it includes art from other conflicts, wrought in the main from the detritus of war, such as shell cases, shrapnel and so on. 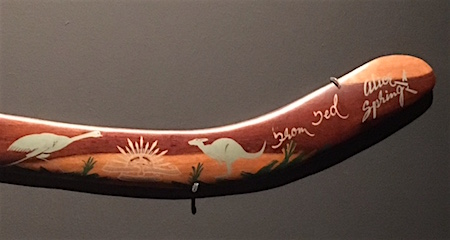 However, part of the trench art display at the AGSA includes personalised boomerangs (one shown at left, dedicated at its other end “to Muriel”) sent back home as souvenirs by soldiers who staged through Alice Springs and the NT during World War II. This drove home to me once again the frustration of the Anzac Hill memorialising, which does nothing to tell this story nor any other that is specific to Alice Springs, where in particular World War II had a profound social and economic impact (see footnote).


In the AGSA show the trench art, presented in a kind of bunker, tells its own story: through the objects, some of them crafted with remarkable skill, it speaks of resilience under enormous pressure, of the longing for home and loved ones, of memory. The objects and the people and experiences behind them are accorded the respect they deserve.

They are also not treated so reverentially that other stories related to them can’t be told. Thus works referencing war medals that make a connection between these hallowed objects and the violence of war are also part of the display. 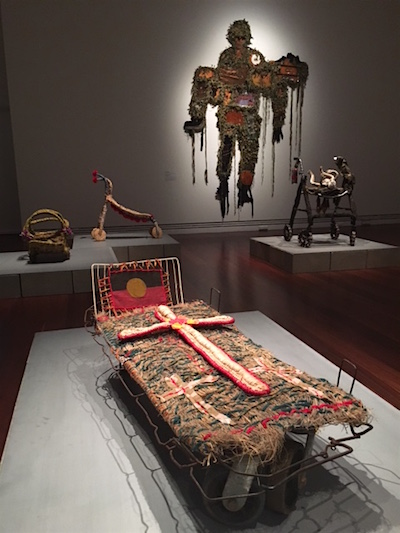 All this is related to war by its conventional definition, the declared conflicts between nation states, with the two world wars of the 20th century at centre stage. However, the exhibition also gives space and weight to the conflict that is uniquely Australia’s to tell, in that it was / is waged on Australian soil. Of particular interest for us here in The Centre, in the AGSA show it is a group of desert artists, Tjanpi Desert Weavers, in collaboration with the well-known sculptor Fiona Hall, who tell a big part of this story.

Curator Lisa Slade sees a direct link between their work and the trench art of the Great War. At their artists’ camp in 2015 the weavers apparently reflected on what present-day “trenches” might consist of and how they could be survived. Like the soldiers, they started their work with detritus, retrieved from the dump at Mutitjulu – a baby seat, a walking frame, a trundle bed, a pram, children’s toys. Their tjanpi (desert grasses) weavings then transformed these objects to speak eloquently of the losses suffered by Aboriginal people in the long history of colonisation. In the way of strong art, the work also speaks broadly to loss; many viewers would feel its resonance at a personal level.

The crosses in Tjituru tjituru (Upset) – trundle bed  (above right) by Lucille Armstrong, Freda Teamay, and Erica Ikungka Shorty,  could be read as referring to the price exacted by the Christian mission era. They are no doubt also a way of evoking the dead, especially given the grave-like form of this piece. Its solemnity spreads to the reading of the other work, underlined by the addition of artificial flowers, which evoked for me the roadside memorials (of individual deaths) in Alice Springs.

I also couldn’t separate my response to Tjituru tjituru (Upset) – baby buggy by Rene Wanuny Kulitja, with its small padded cross taking the infant’s place, from Hall’s harrowing Tjituru tjituru (Upset) – walking frame. This work seems to raise the spectre of foetal alcohol spectrum disorder, one of the most tragic dimensions of excessive drinking, a contemporary “trench” if ever there was one. 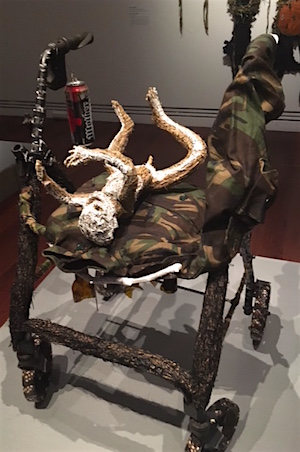 In the image you can just see the broken beer bottles beneath the seat of the walking frame on which is splayed a ghostly baby. The concerns are broadened by the can dangling from the arm of the walker –  the drink cynically marketed as ‘Mother’ (high in caffeine and sweetened by the equivalent of 10 teaspoons of sugar).

In the same room on the rear wall (see photo above right) a work by Tony Albert, a Girramay/Kuku Yalanjin artist from Queensland, takes up another specifically Australian war story – the service in the armed forces of Indigenous men and women and their post-war experiences. Members of Albert’s family have a combined military service of more than 80 years. He has also done a tour of duty as an Official War Artist with NORFORCE.

In calling his work Universal Soldier and representing that soldier in the act not of killing but of caring for another, he pays tribute to values of loyalty and compassion than can transcend war’s horror and the divisions between people. However, he also takes the work beyond its primary image: an up close view reveals the figures to be made up of ‘Aboriginalia’, the souvenir objects from the mid-20th century depicting cliched views of Aboriginal people and culture. Albert seems to be saying that despite their war service alongside other Australians, the perception (and treatment) of Aboriginal people remained stuck in a rut (of stereotypes and condescension at best).

An exhibition has different kinds of opportunities (for instance, scale, materials) to take up its themes than does a memorial work in a public place. The point I draw from my comparison is the value of telling a specific story, rooted in place and community, and of harnessing the imagination of curators and artists to do so. Alice Springs is rich with such stories and with the artistic talent to tell them. A more thoughtful process around the way the town remembers its history could do much to enhance the way it goes into the future, not to mention its image.

In his recently published history Stuart Traynor writes, “The war made modern Alice Springs.” The town became a major staging base for troops and equipment on their way north. Nearly 200,000 troops passed through, with up to 5000 encamped at a time during the peak. Their experience of the town and region would lay the foundation of a post-war tourism boom. Their presence also led to a big jump in the standard of local infrastructure – the track north was upgraded to an all-weather gravel road, and by the end of the war all parts of town had electricity and running water.

Perhaps most importantly, the seeds of change in black-white relations were sown : the army needed Aboriginal labour and they paid those who worked in cash (instead of just rations) although wages were still unequal. Employment freed them from the restrictions of the Aboriginals Ordinance; they could go where they pleased when off duty, including to the army’s wet canteen. Some soldiers still had racist attitudes (not least their commander, Lieutenant Colonel Noel Loutit), but others “treated them like other blokes”, in contrast to the prewar social culture.

Those who couldn’t or didn’t work did not fare so well. The militarisation of the town led to the displacement of many: mission children were shipped first north to Melville and Croker Islands, and later to the southern states; the entire Little Flower Mission was carted off to Arltunga; a number of elderly and infirm people were taken to Haasts Bluff.