Public gives angry thumbs down to closure of police counter 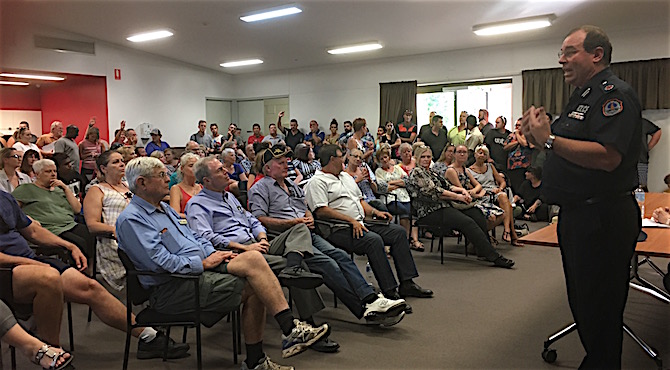 “We’re on the verge of a revolution.”

“Alice Springs is going to explode.”

“Every year, over 15 years, it got progressively worse.” Applause.

“We have seven sliding bolts on every door. We are imprisoning ourselves in our own home. In three years in town we were broken in five times, had three cars stolen and made 30 reports to the police.”

“The little bugger on the other side won’t be breathing.”

Compared to the law and order discussions of previous years, a tipping point seemed to have been reached at last night’s meeting: “We don’t have time. It’s just not happening. We must hit the fast forward button,” as one enraged man put it.

Few – if any in the crowd of 150, mostly white and middle-aged– dissented. 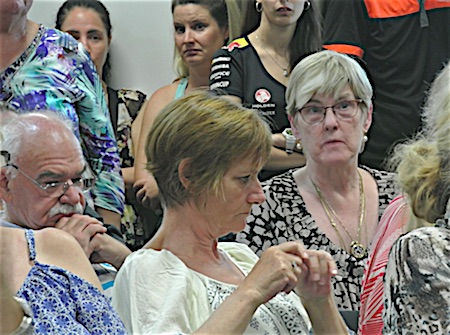 Police Acting Assistant Commissioner Danny Bacon, the top cop in town, was in the chair as well as the person responding to the angry crowd.

Finally the police were consulting the people of Alice Springs about whether or not to close, to the public, the door of the police station for 12 hours every night.

The answer was an unequivocal “no” from those gathered in the Andy McNeill room (fittingly Mr McNeill was a former mayor and senior police officer).

However, Commander Bacon hinted last night, and confirmed today, that the feedback from the meeting would be “taken on board” and a decision on a “pathway” would be the subject of “further information”. After this, in about two weeks’ time, the issue of the night closure would be put before the public again.

The key points at the meeting started with an apology from Commander Bacon for not having adequately consulted the public, nor the police officers involved in the proposed closure. He then blamed social and other media for inaccurate reporting on the issue.

While asserting the move was aiming at putting more cops on the beat (“more front line officers”), instead of “behind walls in the police station,” the numbers he gave were rubbery: “Between one and five” extra coppers would be deployed outside, said Commander Bacon.

Speakers in the crowd, attached to the world-wide notion that the police station is the place you go when you’re under threat, took no comfort from assurances by Commander Bacon: There would be a bell and an intercom outside the locked door where people could get assistance in the same way as making a 000 call, speaking first to an interstate call centre, then to a Darwin-based despatch centre.

Given the notorious delays of response to 000 calls (“you may as well ring Russia”) the meeting reacted with a mixture of amusement and anger to that prospect. Commander Bacon conceded that there are a lot of complaints: “We’re not walking away from it. We’re trying to address it.”

When several speakers pointed out to Commander Bacon that crime had gotten worse, he claimed that commercial break-ins had risen but residential ones had gone down: “We’re doing not too bad statistically.”

“You tell that to the people,” replied one speaker as the crowd booed.

Commander Bacon said the police force is not the only agency that deals with crime, especially juvenile crime, with sharp spikes over the summer holidays. Moves to a collaborative approach are under way.

“We are not going to arrest us out of this,” he said. 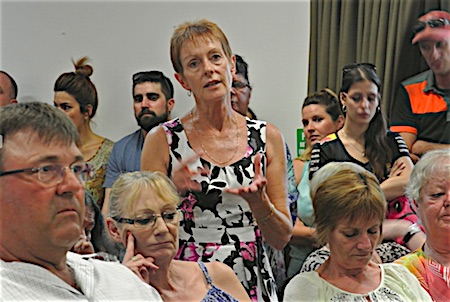 As the meeting extended from the scheduled one hour into a second one, and as people were beginning to leave, topics ranged far and wide from the theme of the evening.

• Rocks will be removed from Anzac Hill so they can’t be thrown at cars.

• We need a think tank, looking forward rather than to the past.

• Judges give offenders a slap on the wrist.

• Comment from a man about children being taken home by police: “The parents are not at home. They don’t give a shit. The kids are running rings around us. It’s a cat and mouse game.”

PHOTOS (from top): Commander Bacon at last night’s meeting • Speaker Di Loechel (at right in the photo) said people from “satellite communities” come to Alice Springs with no respect for the town and its rules of conduct, while expecting visitors to their own bush communities to observe the culture and traditions there. “Happy days, do what you like,” seems to be the message the children are getting, whose take-out is clearly, I am too young, they can’t do anything to me. We are politically stifled by Don Dale and possible class actions, said Ms Loechel: “We are teetering as a society. We can’t live that way any longer. We are on the verge of revolution.” • Kay Eade says the public should insist on the use of provisions in law about victim impact statements and restorative justice: You break a window you pay for it and clean it every week. “Let’s make our voices heard in the courts.”