Many Aussie towns use heritage to say hello to visitors 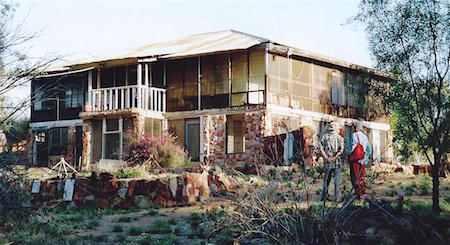 TARA LECKEY, in her comment for our Rest & Reflection series, says the celebration of our heritage deserves a bigger role in tourism promotion.

Cultural heritage author Susan Tonkin describes heritage in the broadest sense as “that which is inherited. Everything which the ancestors bequeath may be called heritage: landscapes, structures, objects, traditions.”

On our recent road-trip to see friends and relatives for the Christmas holidays, my partner Alan and I took the back roads and visited many small regional and remote towns in outback Queensland, New South Wales, Victoria and South Australia. 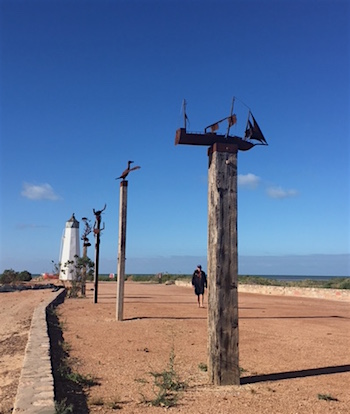 These towns worked hard to attract us with museums and heritage places, and we stopped often to buy fuel, eat lunch and learn about the country we were passing through.

Left:  A small South Australian town on the Spencer Gulf, with a struggling economy, Port Germein through its local council is working hard to present its heritage as an attraction for visitors. At the approach to its famous jetty, apparently the longest in the southern hemisphere, the town commemorates its seafaring history. Photo ASNO.

I experienced firsthand that heritage is a big drawcard for visitors to regional centres. A quick search online proves that local councils are getting on board with impressive websites to promote their unique attractions.

Here and there we came across displays about Aboriginal culture but often the information was scant and impersonal, and it underlined for me the importance of working closely with Aboriginal people.

The trip gave me pause to think about how we care for and present our heritage places in and around Alice Springs, and I think we could do better.

My involvement in the heritage sector goes back about five years and it has given me great insight into the place I proudly call home.


Learning about early buildings already lost to bulldozers and wrecking balls, I feel protective of the old sites that remain at risk of demolition or neglect, and of the people who should have been recognised for their contributions but whose many stories are as yet untold.

I think also of the historic materials and objects that could sadly find their way to the tip someday unless we value and honour them.
Throughout 2016 I helped organise a series of community heritage meetings that arose out of a desire by those involved in the sector to meet and discuss shared challenges.

Right: The foreground sculpture in the photo above, by Max Newbery, recalls the wreck of two ships that set sail from the jetty, the Danish ‘Kobenhaven’ (disappeared 1928) and the German ‘Karpfanger’ (disappeared 1938), both with the loss of all hands including a  large number of young cadets. The story is told in a poem by Noel Smith, reproduced on a metal plaque on the supporting pilon. The other sculptures show local sealife – a cormorant, crabs and fish. Photo ASNO.

I found a great willingness to work together to achieve better outcomes for the region, even though many of those involved work purely on a volunteer basis.

A brief survey of the representative groups revealed a critical lack of capacity (money, staff, volunteers and infrastructure) that is hampering our activities, regardless of people’s skills, ideas, commitment and goodwill.

Although grants can be found for one-off projects and festivals, I have been unable to find any Commonwealth or NT programs to fund operational heritage activities. 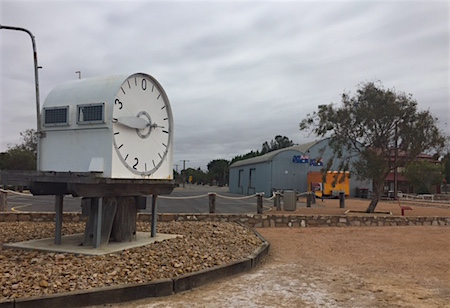 At one meeting someone brought along copies of the NT Natural Resource Management Plan 2016-2020 as it refers to natural heritage.

Left: A rare maritime object, an illuminated clock-faced tide gauge, c. 1800,  is conserved at the approach to the Port Germein jetty. Photo ASNO.

Leafing through this comprehensive plan made me think that we need a similar plan for heritage. We need to understand the value of heritage, how it is perceived by locals and visitors, what role it plays in our economy, and how it benefits us socially and culturally.

To articulate the link between heritage, environment, arts, recreation, education and business is a step towards the development of strategies and programs to ensure that our heritage assets are protected and managed well into the future.

We need to build on the capacity of our small but dynamic and enduring heritage sector and work together to take care of what has been bequeathed to us. I found a great example of one such plan, developed by Bathurst Regional Council, Bathurst Region Heritage Strategy 2014-2017.

These suggestions constitute an opening for ongoing conversation; one that should include a range of voices and in particular, those who are rarely heard.

FOOTNOTE: Ms Leckey (pictured), who was the Coordinator for Heritage Alice Springs (HAS) until the end of last year, says the issue raised with Mayor Damien Ryan by the Alice Springs News Online about the Residency being charged town council rates is now being discussed by the council and the NT Government. She says the matter that needs to be resolved is the ability of HAS to raise funds by leasing space in the Residency to businesses, as has recently been the case with a gourmet bakery. It has now moved to new premises. Ms Leckey says HAS needs this type of extra income to run the organisation. Mayor Ryan suggested if the heritage property is used for a business, all or in part, then charging rates may need to be considered.