Remember when the river … 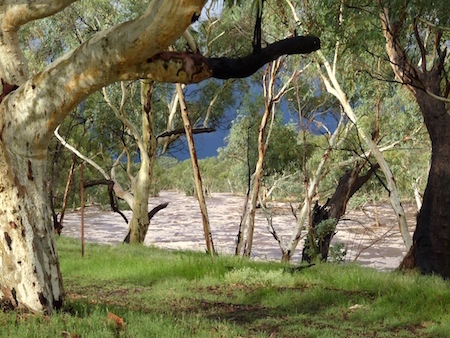 MICHAEL LA FLAMME
in our Rest & Reflection Series says none of us would be here without the Todd.

In the middle of December, my wife Pam tells me: “There’s a storm coming!”

“Look at that one peeking over the ranges.”

“Wow.  But why is the storm coming from down there?”

“Maybe the river will run!”

We watch the sky and smell the winds. As always, the clouds have a mind of their own.  Some days, in the mornings they blow in from the northwest and in the afternoons from the southeast.

The satellite shows the clouds flowing in long streaks, then in waves, then arcs and vast spirals.  The rain starts with less than a millimetre. Then one mill, then zero; then up to five mills, down to two for two days, then 50.4!

“I heard on the news the Finke is flowing.” 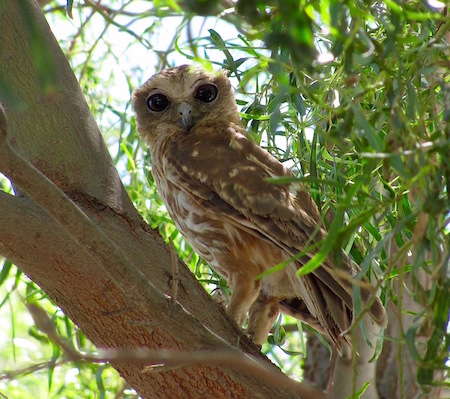 “Now the Hugh is flowing!”

“Why is the Todd still dry?”

“I don’t know.  But it looks like the storm may be circling around to the north.”

Off we go to watch the water, to feel the excitement, to get wet, but most of all to join this community ceremony, because none of us would be here without the river.

Along the river are Aboriginal families, migrants from overseas or down south, backpackers, grey nomads and FIFOs, watching it rise together.

All await the thrill of the causeways closing one by one, hoping to experience the awesome power when the Todd is frothing and churning bank to bank.  Who can forget the first time seeing that, and the intimate feeling of a holiday “banker” when the loudest sound in town is the river.

Central Australia has the least predictable rainfall in the world, and our river powerfully connects us to global changes.

There is an ancient current linking the temperature and air pressure in the Pacific to the Todd’s flow through town.  But that current of clouds passes over a lot of land before it comes to us, and each swirl adds uncertainty.  That’s one reason we celebrate when the rain finds us and river flows!

This unpredictable river has been flowing for such a long time that The Gap rose up around it.  During that unimaginable period, the life along its length has adapted to its erratic low and high flows.

Minuscule organisms like our endangered land snail, or massive red gums and their hollows filled with Boobook nestlings, have become interdependent in ways we do not fully understand, and perhaps can never understand because those connections are older than we are.

We humans are the most adaptable species, but I wonder how our lives would be different if we changed ourselves to suit this desert environment more often than we changed the environment to suit ourselves?

Even though Power and Water has the technology to pump 10,000-year old water from an ancient aquifer, should we continue to consume it at one of the highest rates in the world? Even though an advisory committee wants to build detention dams to protect some properties against the possibility of a major flood, should we forever change the ecology of our ancient river ecosystem?

Our introduction of non-native plants, animals and cultural practices cont 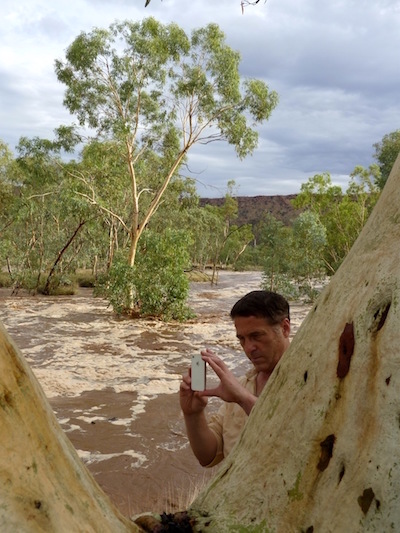 inues to eliminate more and more native species in this vulnerable place.  Overall, I see little evidence of past success “managing” desert ecosystems.

Walking around town, I see stories that would have been different if we had adapted. Why is so much water flowing off roofs, and not into rainwater tanks?  Why does water flow down Eastside streets and ditches into the river, and not into the dying coolibah swamp?

Where did the river flow when the massive red gums in the Araluen centre were young? What caused the loss of the acacia woodlands along Bradshaw? What event long ago placed the dead logs on the cliff above the Gap?

How much valuable soil has eroded under Bond Springs’s hooves to raise the riverbed in town so high? Could we dredge soil from the bed and return it to historical levels to mitigate flood threat?  I wonder what lessons we can learn from these stories.

When I managed IAD Press, our sliding glass doors fronted on the river at ground level.  We expected to be flooded, and planned to minimize our financial loss, insurance claim, and occupational stress.

Before a big storm arrived, we spent an hour moving boxes and files up high.  Our warehouse and records were above flood level in another building. It was the price we paid to spend every day in such a priceless place.

Before moving here in 2006, I was a scientist studying regulated rivers in North America: the Rio Grande through New Mexico, the Columbia between Washington and Oregon, and the Flathead in northwest Montana.

In each case, influential people changed the river step by step to suit themselves, until its ecosystem reached a tipping point and decline was irreversible.  Often, my painful job was to explain the full story to residents on the river: Why the trees were dying, the fish were poisoned, and so much native life was missing. They felt helpless, and tribal elders asked of the regulators: “How can they sleep at night?”

Imagine the day, a few years from now, when the Todd River is regulated and it rains. Residents may get a text message like this: 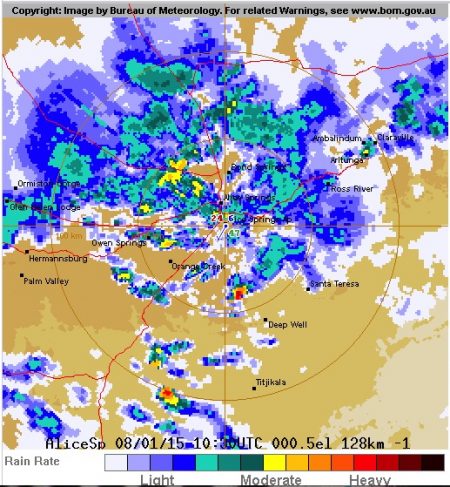 Following Protocol 5.8, the Controller of the River will open Gate #2 of the West Detention Dam to 43% of its maximum, resulting in a 39cm depth in Channel A, with 17cm depth in Channels D and F.  Following Department of Tourism guidelines, it will occur at 4:40pm to maximize views.  Get our RiverCam app with the latest Schedule of Flows!

Each of us is born with a temperament. About half are the flexible type and one quarter are either feisty or fearful. Many fear the possibility of losing their belongings in a flooded river.

However, we should also fear losing more valuable assets: What this river adds to our daily lives, how the riverside brings us joyfully together, and our responsibility for other living things.

Learning to go with the flow will require all of our creativity. Such action is overdue, but the possibility of a flood can be just the motivation we need.