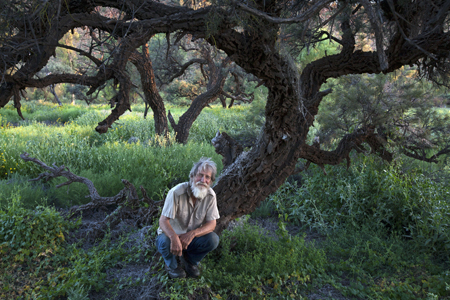 By PETER LATZ
This is the third story in our Rest and Reflection series published during the festive season and written by people who are making a difference to Alice Springs.

A problem which I consider to be little recognized today is the traditional habit of most First Australians to spoil their children.

Having brought up three children of my own I am fully aware that setting up boundaries is very important for them to be able to cope with their later life.

Back in the old days spoiling your children was not a problem for two major reasons.

Firstly, hunter-gatherers had few possessions and so their undisciplined children could cause little damage.

More importantly however, the parents knew that it would be all too soon before their children would be subjected to a very rigorous initiation ceremony, which would ensure that they were strongly made very aware of strict boundaries that they would have to adhere to for the rest of their lives.

As a young teenager myself I well remember my close mate Herman Malbunka telling me that he was so afraid of having to go though an imminent initiation ceremony that he was going to stop his elders putting him through it by keeping them away with the use of his uncle’s rifle.

When I questioned him on the matter he told me that it was customary that after the ceremony you and another initiate had to spend the next three or more months alone in the bush with no contact with any other humans.

If however you did not totally behave yourself during the long and arduous schooling, you would have your right arm broken before you were sent off to survive – or not – out in the bush!  (Nevertheless Herman did not escape being initiated soon after.)

These days however, it appears that youngsters who still go through the ceremony, rarely if ever have strong boundaries instilled in them, and even then these boundaries have little relevance to the life they are now living; even to the extent that they think that their exalted status now allows them to bash up their wives or girlfriends.

About 20 years ago I was told that Walrpiri elders (most of whom are now dead) realised that their youngsters were out of control and they had begged relevant officials to help them rectify the situation.

They were finding that it was near impossible to instil strict sanctions on their initiates as the youngsters could easily escape by stealing cars. Unfortunately their concerns were ignored.

Although I am in no condition to provide a solution to this problem, several that are possible come to mind.

Firstly, and most obviously the problem could be reduced if local people stopped spoiling their children, but I unfortunately can’t see this happening in the near future.

The most likely present-day solution would be to take notice of what the Warlpiri elders wanted and to possibly help them set up a present-day relevant initiation ceremony.

One could, for example, have either a music-based “brat camp”, or also football, or artistic, or stockman based initiation strictures. And to top it off, I know that there are people around who have expertise in this regard.

Photo by MIKE GILLAM shows Mr Latz in his lovingly cared for rural block which has dozens of native plants.