Gunner a no-show at young Round Table presentation 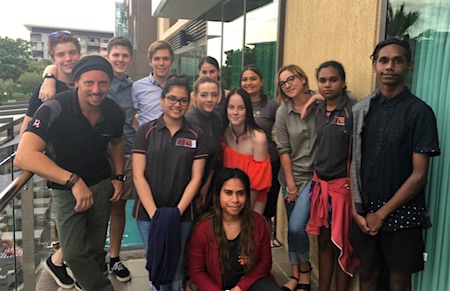 “Stand up, speak out” is the motto of the Chief Minister’s Round Table of Young Territorians.

They are now applying their slogan to the man they are pledged to advise on youth issues: Michael Gunner.

The 16 young people gathered in Parliament House on Sunday to present to him a report of their year’s work.

The Chief Minister was a no-show, but  a government spokesman says three senior ministers attended.

Mr Gunner was at the opening of the “recently completed expansion of Humpty Doo Barramundi Farm,” according to a government media release.

“Fish are more important than young people of the Territory,” says Cindy Uzzell, the only Alice Springs member of the Round Table, pointing to Mr Gunner’s election pledge that “Labor will put children at the centre of government”.

Minister for Primary Industry and Resources, Ken Vowles, was also at the fish function, so why Mr Gunner was needed as well is not clear.

Ms Uzzell (kneeling at centre front in the photo above of the Round Table members) says the group had been looking forward to the presentation on mental health, youth services in Tennant Creek, financial literacy, housing for homeless and the youth diversion hospitality paradigm in East Arnhem.

Ms Uzzell says the Round Table is a direct communication avenue between young Territorians and the NT Government. Its members are aged 15 to 25 years, and are representatives of the geographic, cultural and ethnic diversity in the NT.

About half the members are from the Darwin – Palmerston area.

Says Ms Uzzell: “We have four meetings in Darwin each year, and one teleconference before each meeting.

“From the first meeting we form focus groups about community issues we are passionate about.”

Other Ministers and departmental staff attended the presentation but “the Chief did not show”.

“We value the ideas of young Territorians and will continue to work with our up and coming leaders of our communities,” the spokesman says.

Mr Gunner says children were at the core of the agenda at his first Council of Australian Governments (COAG) meeting today.

He says he is using the opportunity to put issues significant to the NT on the national agenda. Early intervention was a major theme during discussions, which also included youth justice, indigenous disadvantage, housing and homelessness.

“The core of today’s agenda was children – ensuring they live in appropriate housing, receive a quality education, have access to healthcare and grow up in a safe environment,” Mr Gunner says.

“The Northern Territory has important challenges in all of these areas and I’m pleased COAG helped place them on the national agenda.”