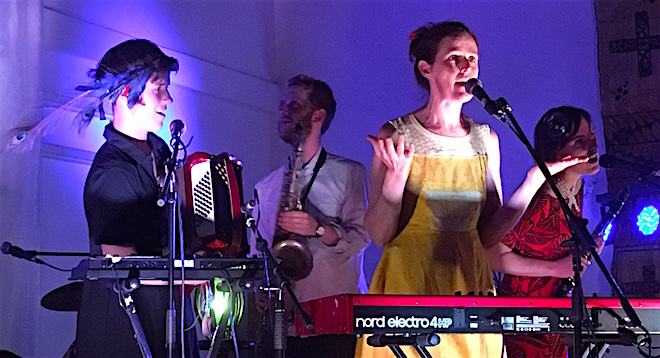 At the door of the church a sign – “Open for prayer”. Inside, the altar is strewn with electronic instruments, microphones, cables. Prayer of the musical kind then?

Well yes, in the sense of voices raised and some kind of entreaty … to beauty and feeling and, especially in a place such as a church, to a communal experience of these things. 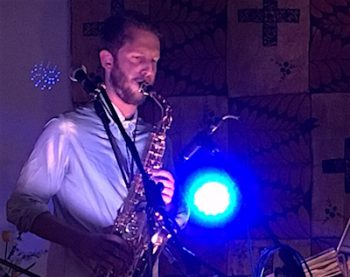 The Anglican Church of the Ascension, in Bath Street Alice Springs, offered another benefit for the gig: wonderful acoustics. Its soaring ceiling and encircling walls seemed to draw the sound up, while also sending it out and around, rich and full.

The first of these sounds was from the saxophone of Edward Francis (left), special guest supporting the main act of four women – Tamlyn Magee, Ms Xavia, BB Sabina, and Katelnd Griffin – each of them as versatile musically as the rest. Besides sax Francis plays guitar, keyboard, synthesiser and sings; Magee plays harp, keyboards, drums and sings; BB Sabina, keyboards, clarinet,guitar, synth, and sings; Griffin, drums, keyboards, accordion and sings; Ms Xavia, cello, accordion, drums and sings. This may not be a complete list. Recording on laptops should also figure.

On top of this, all of the musicians are writing their own material. When they came together – just four performances ago, the first in May this year – the deal was to each contribute two original songs, handing them over for collaboration. “Take my song … and run with it”, as the title of the gig put it.

Griffin (whose performance achievements include The Package) said she struggled. But in the end she came up with the hit of the night, a talking song about trying to be her own woman against myriad expectations, for which she borrowed the theme from Scott Joplin, “The Entertainer”. 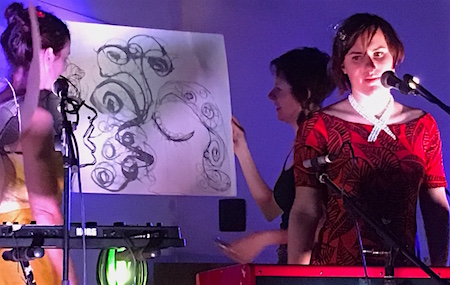 It had a great playful delivery, with all four women swapping instruments, changing keys and crowding in on the keyboards, a light-hearted musical echo of the way identities are shaped by our experience of others as much as by our own inner forces.

Right: BB Sabina during her song, “Right Now”, to which Griffin and Magee improvised a drawing, one of the non-musical elements of the show.

Other songs, both from the women and from Francis, tended towards the introspective – reflections on loss, personal struggle, longings, the search for meaning, including the meaning of being on stage. All made the most of beautiful harmonies, both on instruments and vocally, with the plucking of harp and cello strings providing highlights of lovely delicacy.

I guess the word ‘indie’ would be used somewhere in describing their style. Perhaps noting their two covers suggests the terrain, with the women, led by Griffin, covering “Laura” by Bat for Lashes (Natasha Khan), and Francis together with Dave Crowe (Alice Springs Pop Choir) offering a Leonard Cohen homage, with “Hallelujah”.

As Francis said, “This town is ridiculous” – i.e. talented.

This was the group’s last gig for this year, after outings that included the Darwin Fringe and Desert Song. Next year’s plans are to tour more widely, in the NT and beyond.

Below, from left: Katelnd Griffin in fairy wings, Tamlyn Magee, leaving aside her harp for synth and clapping, cellist Ms Xavia taking a turn on keyboards.