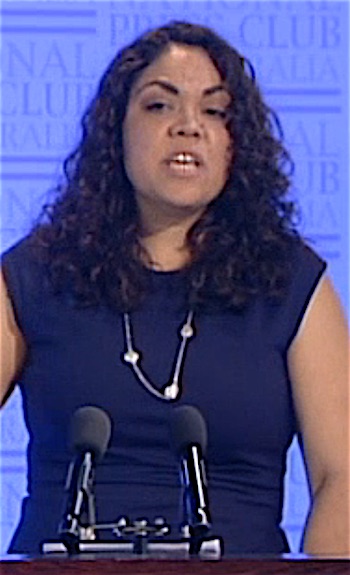 Stepping into the shoes of her mother, former NT Government Minister Bess Price, as a no-holds barred campaigner on these issues, the singer and TV producer claimed the crimes against women and children are perpetrated behind a cloak of silence, are excused on the grounds of traditional culture and have the tacit approval of politically correct whites.

In the same event Professor Marcia Langton, a former Alice Springs resident, told the nation’s media about a massive imbalance in suffering as well as offending by Aboriginal people, while massive government spending is almost entirely without scientific evaluation: Out of 1000 government-funded initiatives, a mere 34 have been examined as to their effectiveness, she said.

Ms Price recounted an event in her family home at Christmas, when she was nine years old, when a drunken guest picked up his boy by his hair, and dangling him at arm’s length, threatened to kill the toddler if his wife “continues to disobey him”. Ms Price says her father called the police.

That man later broke his wife’s jaw, put her into ICU twice “and on one if these occasions she was close to death,” said Ms Price.

“Despite this she went on to have a chid with him. In fact she stayed with him until the day he hanged himself. She discovered his body.

“She has since looked after her mother-in-law for fear that her in-laws would blame her for his death, as traditionally a wife is often blamed for her husband death.

“I have know of cases of women ordered to submit sexually to male relatives of the deceased husband for not fulfilling the correct duties of a wife, which is to take care of her husband even if he is a perpetrator.”

Ms Price said in many of the cases of brutality she has become aware of, she was related to “both the victim and the perpetrator and where the kinship network demands loyalty to your family members even if they are perpetrators.

“One is expected to pretend that there perpetrators are decent human beings and ignore the fact that they have committed acts of physical and sexual violence against those you love, because to speak out, to speak the truth, is to create conflict.

“So from early in life everyone learns to lie to keep the peace, which manifests in youth suicide and a destructive cycle.”

The number of deaths from violence that impacted her family are “in the hundreds,” said Ms Price.

That code of silence “blankets both remote and urban Australia” which “allows perpetrators to control their victims. Culture is used as a tool by perpetrators in defence of their violent crimes or as an excuse or reason to perpetrate.”

It is not acceptable that anyone is violated, and have their human rights “utterly disregarded … in the name of culture.

It is a “national shame that in our recent history Aboriginal male perpetrators have got away with their crimes based on the argument that they were acting within their culture’s confines.

“Other excuses include that Aboriginal men are victims of colonisation and dispossession and therefore we must empathise with them end excuse their violent behaviour.

“Men regarded as elders have been known to abuse their power by perpetrating physical and sexual violence, while their family and their close circles support them … to the point where they will even appear alongside the perpetrator in court to intimidate and threaten the victims and the victims’ female supporters [even] in cases where there has been proven to have been years of sexual abuse of a child.”

Ms Price said no such lenience is afforded to “men of the cloth” in the Catholic Church while the “politically correct” condone it in Aboriginal society, often on the grounds that non-Indigenous people have no right to criticise Aborigines.

Ms Price said she had been placed under “immense pressure” to withhold “some of what I said here today.

“What I have said may put my immediate family at risk of retaliation and violence and the possibility that employment opportunities may be impacted.”