Home Issue 8 Greens Senator: Investigate those who led us into the Iraq war
Issue 8Volume 23

Greens Senator: Investigate those who led us into the Iraq war 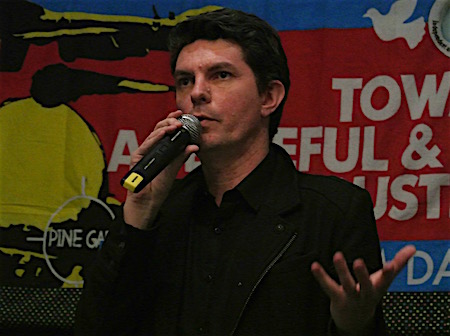 Greens Senator Scott Ludlam last night called for the investigation and possible prosecution of politicians who led Australia into the Iraq war.

After describing the Australian Prime Minister’s office as one of “jointly operated outposts of the United States Government” he told a public forum about the Pine Gap spy base in Alice Springs: “Australia submitted to participating in an illegal invasion and occupation that has torn the region apart and paved the way for the emergence of Islamic State.

“Hundreds of thousands of people died on that decision. The region is in meltdown and even the impending assault on Islamic State strongholds, everybody seems to agree, is likely to dramatically increase the risk of terrorism world-wide.

“The geniuses who set this horror in motion, none of them have ever been held to account let alone prosecuted. Not a single one. And they are the same people who now insist that the only way to stay safe is to submit to mass surveillance.”

Senator Ludlam was addressing about 120 people in a public session of a week-long gathering of the Independent and Peaceful Australia Network (IPAN) during which several civil disobedience actions have taken place although the only charges laid were dismissed by the court.

Senator Ludlam was scathing about the “self-imposed, almost automatic bipartisanship on anything of consequence that relates to national security and defence.

“If it’s a Labor government you won’t get the Coalition to stand up and make impressive speeches about how no-one was consulted before they implanted a US Marine Corps facility in Darwin.

“Similarly, when the Tories are in government Labor caves in automatically, without a second thought about mass surveillance proposals like mandatory data retention.”

He said other measures to disenfranchise the public included “neutralising” committee reports and “preventing enquiries from happening at all.

“They can vote down motions or refuse to debate them altogether and there is a variety of ways to lock down Parliament’s normal oversight tools.

“We can have an argument where the ADF buy their boots and that can be argued about for months and months.

“Or we can have arguments where this extraordinarily fleet of submarines – which will be obsolete on the day the are put to sea –are built and where those jobs occur, but about their basic, underlying strategic direction and doctrine we just have this automatic bipartisan consensus which is difficult to crack.” 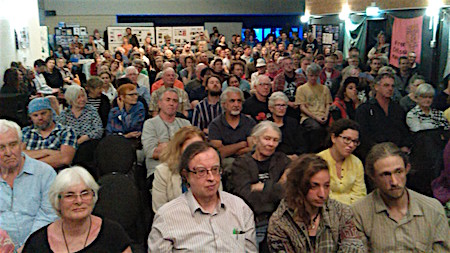 Sen Ludlum says the real power lies with the executive, with the agencies and the service branches “and doesn’t come anywhere near Parliament”.

The Joint Committee on Defence and Security has no cross-benchers. When data retention was being debated it was “all blokes, an old boys committee … that has no operational oversight” contrary to the US system.

Concerned with trade deals, trans-Pacific partnerships and defence commitments, “the Treaties Committee, where some of these agreements are signed, doesn’t get eyes-on until after they have been signed.

“No member of the public has ever seen the legal instrument underpinning the US deployment into Darwin” although from that base the US can deploy forces “into war” into the region.

US deployment into Darwin is now commonly accepted to be a base and “not a training or rotational anything”.

While bases including Pine Gap exist “it’s impossible to have an independent foreign or defence policy. It’s simply not feasible”.

Senator Ludlam put to the meeting “still sketchy thoughts” for a strong network of dedicated people to build trust and share expertise; to act on growing skepticism about the role of the United States “in setting our foreign and defence policies,” heightened by the possibility that “a narcissistic fascist is only one vote from the Oval Office.

“This is scaring the crap out of people, left and right. Do we actually want our foreign policy being set by that guy?”

However, the question of Trump vs Clinton may well be, “do you want your Armageddon fast or slow?”

He suggested the introduction into the Australian Constitution of an Article 9 like the Japanese one forbidding armed aggression.