'This beautiful body of knowledge' at the Strehlow Centre 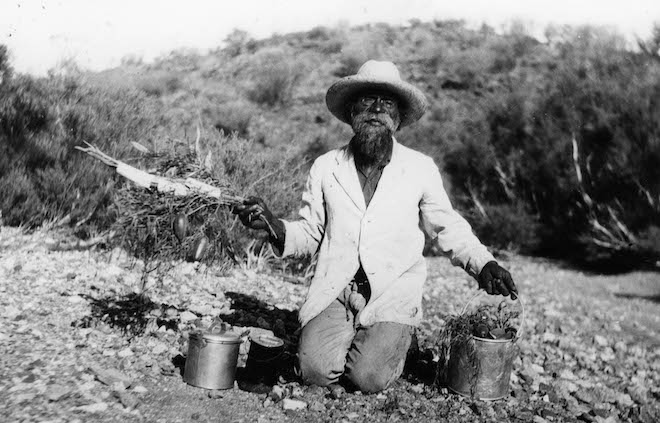 At an event celebrating the 25 year history of the Strehlow Research Centre, chairman of the board Ken Lechleitner acknowledged “the real visionaries in this story – the elders who entrusted Theodore [TGH] Strehlow with their cultural knowledge and Theodore himself who dedicated his life to collecting and preserving this knowledge.”

The collection is used today in a myriad of ways, he said: “The genealogical information has been used to reunite families across generations. The centre has become a keeping place, a cultural bank where we now use these objects and icon documents and they will be safe for future generations.”

These were among the themes taken up in the moving speech reproduced below by SHAUN ANGELES, an Indigenous Repatriation Researcher at the centre.


Werte and welcome to everybody! I would like to acknowledge and pay my respect to the Apmereke-artweye and Kwetengerle families of this beautiful country. What an amazing collection and what an emotional roll-coaster it’s been for me personally working inside the collection for three years now. I want to thank Adam Macfie, a mentor and dear friend for giving me the opportunity to work at the Strehlow Research Centre (SRC). I also want to take this opportunity to acknowledge Adam’s vision of Indigenous employment within the SRC.

I am one of only three Indigenous people to work here and the second after Mark Inkamala, a western Arrernte man and a cultural mentor of mine, and recently Uncle John Cavenagh, a senior Eastern Arrernte cultural genius and teacher to me. Adam fought hard for this vision and I want to thank him for his conviction and belief that we as Indigenous people can bring a unique perspective, passion, enrichment and innovation to this very important cultural heritage work. In Adam’s words, Indigenous people “hit the ground running” when working with our cultural material – it makes sense, doesn’t it!

I would also like to thank the Museum and Art Gallery of the Northern Territory and Marcus Schutenko who I think is a great leader for the museum and an advocate for Indigenous involvement within museums. We currently have a wonderful manager of the Museum of Central Australia in Felicity Green. She is respectful, very intelligent, passionate, and innovative but most importantly has that fire in the belly. I look forward to working closely with Felicity over the coming years.

I also want to thank my Elders – Huckitta Lynch Penangke, Ken Tilmouth Penangke, Martin McMillan Kemarre, John Cavenagh Kemarre, and Bayden Williams to name a few – for endorsing my employment at the SRC and supporting me with their wisdom, love, and teachings.

My name is Shaun Angeles and I am a Penangke man from Ayampe country. I commenced working at the SRC in September 2013 as an Indigenous Repatriation Researcher. Like I said before, it has been an emotional roll-coaster. I’ve experienced joy and happiness watching these old men perform on film and reading about their stories of resilience, vulnerability and strength. On the other hand, I’ve experienced deep frustrations and sadness when reflecting upon the dominant western culture’s systematic destruction of our most beautiful culture, its people and Land.

I’ve also found myself laughing and smiling while reading particular diary excerpts and also crying while watching these amazing men on film. It sounds crazy but it’s very real. Very real for Indigenous people! Some days I feel light, easy, and empowered doing this work and other days I feel heavy with responsibility and worry about our future generations and how they’re going to navigate this crazy world and carry our culture through time.

I have worked intimately with the collection for three years – analysing field diaries, editing the ceremonial film footage, working with individuals and families with the genealogies, digitising the ceremonial song catalogue and travelling to museums within Australia searching for artefacts that left this landscape in some instances over a hundred years ago. It’s like being involved in a ceremonial soap opera.

You feel to a certain extent like you know these old men, in sometimes tracking their lives through four decades of work with TGH. You begin to develop favourites or you relate to a specific person more than what you may another. There’s a real intimacy involved. I look forward to other Indigenous men experiencing this because it is very uplifting, and a very special part of being a human – to experience the wide array of emotions available to us. For me that’s our greatest gift of being human. 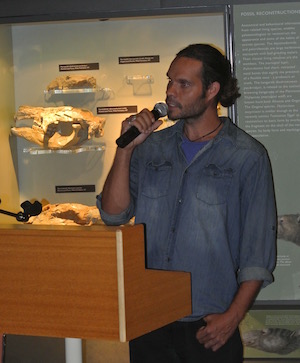 As a young Arrernte man, I want to pay my deepest respect to TGH Strehlow for doing his amazing work, which spanned four decades from the 1930s  to the mid 1970s. Over the years, numerous people have written about him and there are many different points of view regarding his life work, his personality and character, and his relationships with people. I’m not going to stand here and do the same, I just want to thank him for working with our old men to document this beautiful body of knowledge. I think he was an amazing man.

What I want to do though is shed light on and elevate the story of the Akngerrapte (senior cultural leaders) who, in my opinion, possessed the greatest agency in this story. They were the co-creators of this collection. They chose what to show Strehlow. I want to thank these old men for their vision and foresight to record some of the deepest aspects of Aboriginal men’s culture in Central Australia for the benefit of their future generations.

If you strip the collection right back to its core, its essence is all about sacred land management practice and human wellbeing management. Take away all the English language, government red tape and bureaucracy, museum ideology and practice; the collection documents the sacred ways of maintaining a balance within our environment – a balance between the land, the people, and the spirits. Our Land and our culture provide us as Aboriginal people a wellbeing that nothing else equals.

At no other point in recent human history has the Earth needed its Indigenous people to practice their sacred ceremonies more than what it does at present. In this current age where western culture has waged a war on the environment and the world’s Indigenous peoples, we stand on a precipice. We need to bring a balance back. Devastating practices such as fracking and mining are not only destroying our Earth but also us as humans.

It is important for us to work very closely with our Elders to realise the collection’s true potential. We have to include our elders throughout every process as they are the ones – and the only ones I might add– who understand its content and are able to enrich it and enrich the lives of our young men who are coming through the ranks. Our elders were left out of the collection for so long, so now we have a perfect opportunity to rewrite this bit of history and involve them with everything we do.

We need to find innovative cultural ways to unlock this potential. For the past 25 years it has been like a sleeping giant, or a dormant volcano. I believe it’s time for us to wake it up and spread its power throughout Central Australia and its people.

Over the next 25 years I would like to see the SRC grow to accommodate the employment and involvement of more Indigenous people. I would like to see Anmatyerre people working with Anmatyerre material, Pertame people working with Pertame material, Luritja working Luritja material and so forth. This would be more culturally appropriate, culturally safe and a best practice model.

I would like to see initiatives such as Cultural Apprenticeships where elders work directly with their younger generations in training and teaching these ancient ways. I would like to see an independent board of Elders to guide and influence our work.

We need to forge new relationships with the community itself and with other stakeholders such as the National Film and Sound Archive (NFSA) where much of the SRC’s original film and sound material is kept. We need to form close working relationships with the Arid Lands Environment Centre (ALEC). Why you might ask? It’s simple! ALEC fight hard for the protection of the environment – the SRC is an institution that holds environmental knowledge therefore we need allies that carry this same respect and passion for the Land itself.

Finally, the Strehlow Research Centre and the Museum of Central Australia doesn’t fit the traditional model of Museums. This is a living breathing collection that needs Aboriginal custodians interacting with it. There are many stakeholders to this collection but the most important are the Indigenous people – the custodians and owners of this material.