Six “Peace Pilgrims,” whose ages span 19 to 73, travelled through the desert together last night and are due to arrive on a crest inside military land at dawn and there sing a mournful lament about the human cost of war, according to a media release from activists in town for protests against the joint US-Australian spy base, Pine Gap. 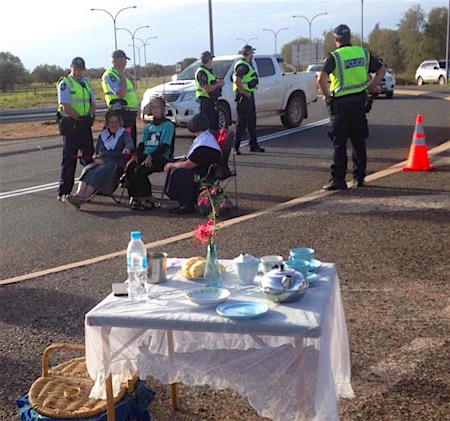 Protestors, including Margie Pestorius, apparently invading the restricted area of the base, were streaming live on Facebook during what appeared to be an arrest.

Meanwhile four protesters have chained themselves to the gates of the premises of the US military contractor Raytheon in Whittaker Street in the industrial area (photo at top). A spokeswoman for the protesters says police are present and are conversing with the activists, but there have been no arrests yet.

UPDATE 8:45am
The Alice Springs News Online understands there have been five arrests so far.


UPDATE 9:50am
Protest organisers have confirmed that the five people arrested were the ones mentioned in the report above.