Some FAQs not covered by the “Parrtjima – a Festival in Light” website:

Is the “first authentic Indigenous light festival of its kind in the world,” running for 10 days, really worth the nearly $8m price tag over six years?

How come the bulk of the taxpayers’ money goes to a Sydney company and just a handful of the huge local pool of artists and technicians are involved?

And how “authentic” is the show when the organisers stubbornly persist in presenting a caterpillar dreaming whilst having been told, at least since May, that a dog dreaming is the story of that part of the range where show is being staged, at the Desert Park?

PHOTO above right: This image from the ABC TV News report on Saturday shows representations of caterpillars on the northern flank of the range.

A 45 minute walk eastward from Simpson’s Gap on the Larapinta Trail will take you to a hill from which you can watch the sun setting on the MacDonnells to the south.

The beauty and purity of the range turning orange and then blood red will take your breath away, and the magnitude of the spectacle – dozens of kilometres wide rather than two or three – leaves Uluru (Ayers Rock), well, in the shade.

There are probably a few hundred locations like that throughout the West Macs, and the East Macs, which are world famous for their magnificent natural colours.

On top of that, the night skies in The Centre are renowned for their crystalline brilliance.

All that makes it a puzzle why ex-Chief Minister Adam Giles decided to bring in a Sydney based company at a cost of $1.3m per 10-day season for six seasons (that makes it $7.8m) to show the public – what? Artificial colours on a hill?

Is what nature provides not good enough? Is raising a vital question of branding, something our tourism promoters could have a problem with?

It soon became clear at Friday’s opening that nature hasn’t got much to worry about.

If you managed to settle down somewhere to “experience the oldest continuous culture on earth like never before” – as the spin would have it – the noise of buses every 10 minutes ferrying spectators in and out, and amplified other special effects audio would have made you yearn for a quiet night by a campfire, looking at the stars.

The lavishly catered dinner (by Lisa Perry, Reality Bites) at Madigans was an interesting affair: Just one politician was present (Stuart MLA Scott McConnell, representing the absent Chief Minister Michael Gunner); one town council member (Mayor Damien Ryan); most of the usual suspects at functions of this type were not there; two tables of Aboriginal people, whose culture after all was supposed to be the centrepiece of this gathering, not interacting to any significant extent with the rest; one table for a Virgin air crew.

If it’s Indigenous canvasses you want to see, instead of Ersatz Aboriginal culture, just down the road at the Araluen Art Centre the Desert Mob exhibition would be hard to beat, and there is no question of its authenticity.

Which brings us to the issue of consultation which – as the opening crowd was told tirelessly – was extensive and exhaustive.

How come then that Parrtjima doesn’t get the core message right?

There is extensive documentation of the dog story, including by senior custodian Doris Stuart, and also the late Harold Ross, who appeared in a local TV documentary screened on Imparja in 1991. It was produced and filmed by the writer of this report, Erwin Chlanda, and edited by David Nixon, a highly skilled local video artist, active in The Centre for decades (see video clip above of the first two minutes).

Yet Parrtjima’s projected shapes spinning and whizzing around from time to time, made up of white dots, clearly represent caterpillars, not a dog.

Mrs Stuart said in May about her negotiations with the organisers at the time: “I could not understand what they were doing. No-one was upfront.”

She was speaking through a mutually trusted intermediary yesterday. This is how he relayed her statements: “The terms ‘consultation’ and ‘authentic’ must be challenged.

“The Adam Giles crew knew what they wanted and did not follow the advice given by custodians.

“The butterfly depicted does not come out at night. This is relevant given that the display is part of the Desert Park.

“If the NT Government invested that much money in protecting and enhancing specific sites this would be of more abiding interest to tourists coming here seeking authentic exposure to Indigenous culture and ecology.”

AGB Events director Anthony Bastic and curator Giles Wesley were not available after the event to answer questions, according to the publicity company, also Sydney based. Mr Wesley is on a camping trip, we were told, and Mr Bastic “may” be available today. No doubt he will be in touch when he is good and ready.

In the meantime, according to the Parrtjima website, we can find out how “dreaming stories have been passed down for thousands of years and continue to be passed on today” from the Australian Museum – also in Sydney.

Consultation did take place, according to local arts sources, but it seems Parrtjima was resolved to ignore what they were told.

Red Hot Arts chairman Jason Quin says his group went into talks with the intention of collaborating with local skills and capacity but “not a lot came to fruition. Hopefully there will be stronger outcomes in the future, if Parrtjima continues”.

He says former Chief Minister Adam Giles “drove the discussion” and the organisers made it clear there would be no money for local partners.

This year’s Alice Desert Festival was reduced to promoting under a handful of independent events. Parrtjima is taking place in festival month, kicking off with Desert Mob and Desert Song, in a very busy period for the creative sector.  (NT Government funding for the Desert Festival last year was $180,000.)

Psychologist Craig San Roque, serving on prominent arts organisations but speaking in his own right, says Mrs Stuart and family took part of the discussions with Parrtjima personnel, especially Mr Wesley, who was attentive and became acquainted with the delicate cultural issues, especially that Mt Gillen is a dog, not a caterpillar dreaming site.

“This is not a story to be played with,” says Dr San Roque.

But is was clear the then Chief Minister “would make the festival go ahead”.

Dr San Roque says he is aware of efforts to involve local people to “brief, orient and assist” but with scant results.

“I am shocked to see so much money being spent without local theatre people, actors, technicians, black and white, being involved. It is a big disappointment.

“The light show is showing the wrong story – it’s Alice Springs Aboriginal Disneyland on the way.”

Photographer Mike Gillam says it was clear to him that Parrtjima, in its present form, was a done deal and the consultation was simply going through the motions. 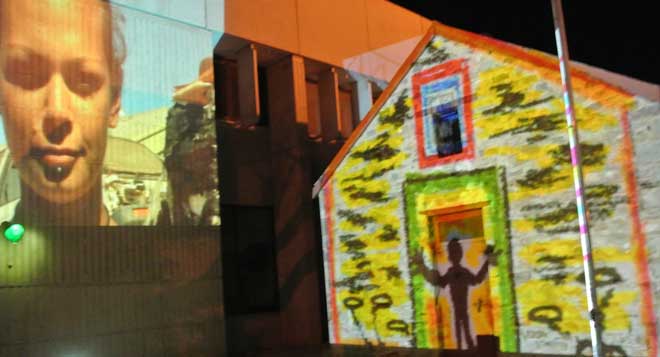 A much better result could have been achieved in another location, he argues: In the town centre are buildings, pavements and surfaces suitable for projections and the light show would have been “closer to the people”.

Multiple curators could have developed different parts of the story.

However, in his conversations with the organisers he noticed the project was already “locked in”.

Mr Gillam was critical of the cost of show: He had to exhaustively document a grant, subject to peer review, for $20,000 to fit out an empty “pop-up shop” in Todd Mall to show Maximon of Mparntwe, a magnificent photographic celebration of the natural environment and particularly the birds of the Centre. It had 5000 visits. The project took two months of his time plus further expense.

“I am sure the cost of Parrtjima will be discussed in the community. We have a strong, creative community and the expenditure makes us look like flat footed amateurs.”

Visitors who made notes into Mr Gillam’s comment book highly praised the quality of his work.

Mr Nixon says with the town’s “plethora of visual and performance artists, it would have been amazing what we could have done with $1.3m”.

Meanwhile the town wants to become the home of the national Indigenous cultural centre. A firm gets a sensitive multi-million dollar cultural contract from the NT Government and calls the story about a sacred site a “legend”. Is Christ dying on the cross a legend? The dysfunctional Lhere Artepe native title organisation is acknowledged in “an extensive consultation process to respectfully bring Parrtjima to life”.

Michael Gunner, over to you.