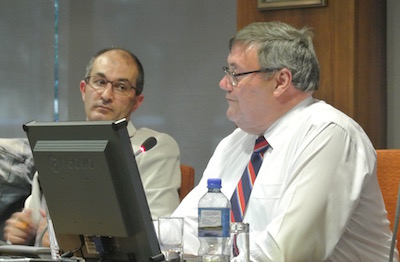 Mayor Damien Ryan is concerned that Local Government has not been deemed important enough to have its own Minister in the new Territory Government.

Right: Mayor Ryan (right) alongside Cr Eli Melky who returned to council last night after running in the seat of Braitling in the recent NT elections.

Mayor Ryan, who is also the President of the Local Government Association of the NT, says community development and local government are two completely different issues. As the third tier of government, councils in the NT deliver services to and represent a lot of people. They are also in charge of expenditure of some $420m a year and have over 3400 employees.

He commented at last night’s Town Council committees meeting on some of the responsibilities allocated to the Assistant Ministers of the new government. Clearly he felt that they didn’t compare in significance to local government.

He told the Alice News that some regional councils deliver community development services as third party operators on behalf of the NT and Commonwealth, but none of the municipal councils do this. He said his travels around the NT have made him acutely aware of the size of the housing effort that the new government will have to undertake. His concern is that local government issues will get lost in a department whose defined focus is on these areas.

He said he had made his views known to both Mr McCarthy and Chief Minister Michael Gunner and is calling for reinstatement of the portfolio.

He said Mr McCarthy assured him that he is very keen to work with local government, but this has not put to bed his concerns.

He said the change makes the NT the sole jurisdiction without a local government Ministry (Tasmania’s includes Planning; the ACT does not have local government). He would be happy to see an NT Minister and department of Housing, Local Government and Community Services.

In response, councillors supported the preparation of a motion to go forward to the LGANT AGM in December, which in the past has always been attended by the Chief Minister and other Cabinet members.

The Alice News has asked Mr McCarthy to comment.